Sunday, on my way home from Ann Arbor, I finally decided to stop by this small county park that I've passed several times since moving here.  It's only a few short miles from my home, and the day was beautiful - it just called to me. 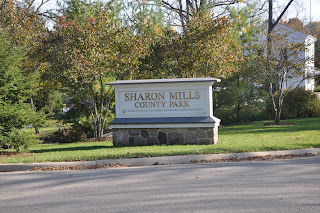 Sharon Mills used to be a little hamlet, consisting of several homes and even a bit of industry.  Today, what remains is the actual mill, the old store (now a private home across the street), and two other houses that are now rental units.  The Washtenaw County Park System owns the mill, and they've done a lovely job preserving and interpreting it.

Come with me for a short tour. 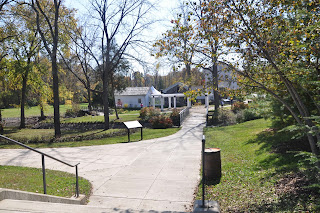 Now, like all good and proper mills of the late 1800s, this one was water-powered.  The water in question  here is the River Raisin (don't you love that name?).  The River flows eastward here, and the builders promptly diverted a portion of it and used its power to operate a mill.  On this site there was once a sawmill (they have an old movie clip inside that they acquired from the Library of Congress, which shows the elderly sawmill operator sawing a log here in the early 1900s), and a grist mill. 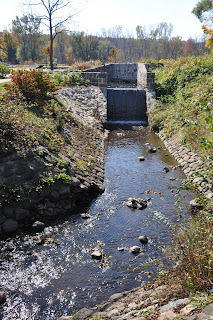 But ultimately Sharon Mills' claim to fame came down to this man:  Henry Ford (who, apparently has quite a bit of history here in Michigan).  Henry believed that every village could have a small factory that produced some useful product (namely for his automobiles).  Several were set up in Michigan, and Sharon Mills was one of the first (in fact, I think it was #13). 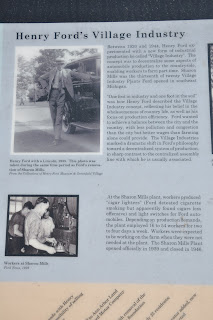 And what did the Sharon Mills factory crank out?  Cigar lighters! 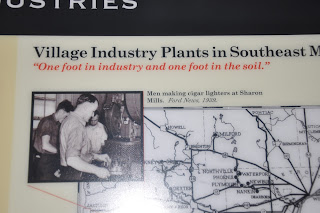 Inside the mill today, all polished and shiny, is the water-powered generator.  When a crowd of visitors gathers round, the interpreter on duty turns the wheel, lets the water in, and the generator starts generating.  The two silver balls on top go round and round, and the lights in the ceiling suddenly begin to glow.  It's a beautiful thing. 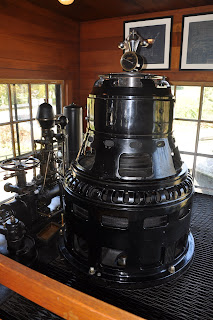 Downstairs the building is mostly empty.  There are often weddings held on the grounds here, and I imagine this space is put to good use on such occasions, especially when the weather is inclement. 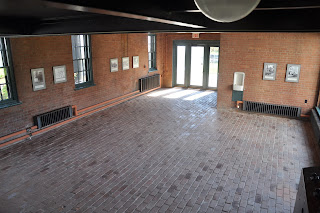 There were quite a number of folks out this Sunday.  Two or three trails begin at the mill and take off for the woods and fields out back.  I asked the proprietor if dogs were allowed (I'd say that in 99% of the parks and open spaces I've encountered so far, dogs are not allowed), and she said that yes, indeed, they were!  She specifically recommended a trail across the road that went along the river. 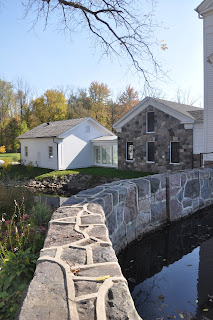 Hooray!  I drove home thinking that maybe tomorrow we'd come back for a walk.  I put the groceries away, and washed the dog (he was starting to get rather ripe).  And after a couple hours I decided not to wait - it was too nice today - we were going to check out the park.  I rigged Toby up in his ski-jor harness and off we went. 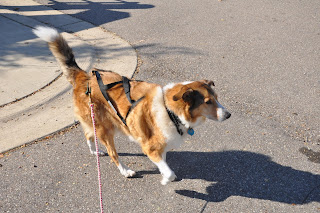 It took a little scouting, but we finally found the trail, thanks to a woman named Mary who is renting the house across the street.  The path runs up along the side of the property and into the field behind, where it takes a turn southward toward the river. 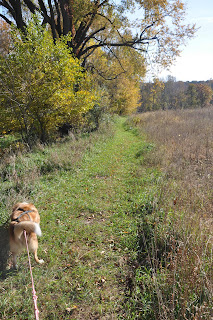 And there it is, the River Raisin.  Looks like it'd be good for paddling. 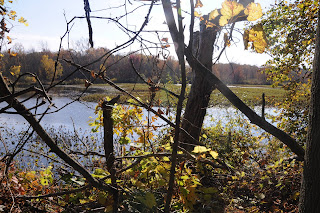 I must say that over all the trail was unremarkable.  One side was field, one side was river, 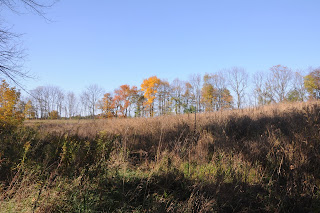 and the trail itself ran through the buffer strip of trees in between. 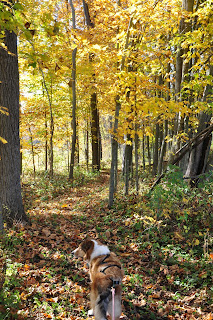 After maybe a quarter mile, the trail turned back north, and we left the river. 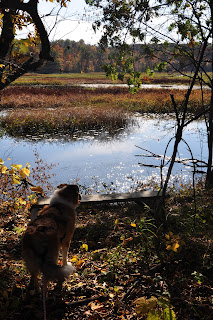 We zig-zagged up a small switchback, where I snapped a couple pics of the late-blooming flowers (some asters, 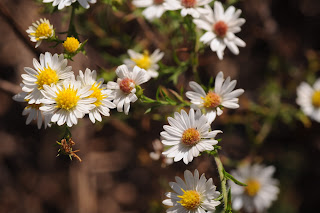 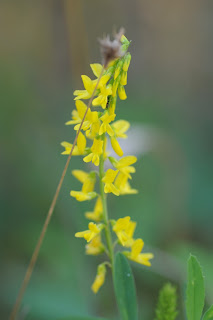 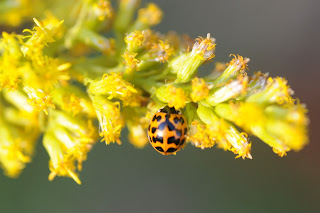 I could see the legs of the switchbacks weren't that far apart, so I decided to jaywalk across the field instead. 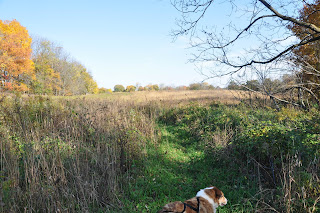 On the surface, this wasn't a bad plan, 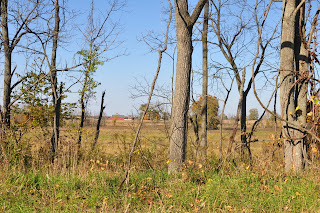 until I felt something poking my leg.  Sand burs!!!  I hate these things.  First discovered them a year or two ago in Johnsburg, where they had the kids from the school in tears and made our fingers bleed when we tried to remove them from our clothes.  Luckily for me, these ones weren't completely stiff and hard yet, so they were painless to remove. 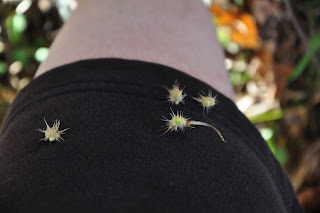 Now we were walking on the uphill side of the field, still in a buffer zone of trees.  Lots of walnuts - poor Toby kept losing his balance as they rolled beneath his feet. 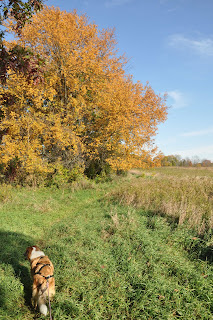 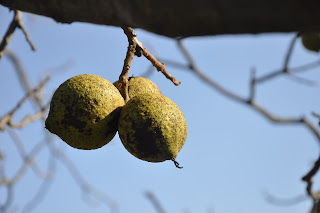 Overall, I'd guess this trail was less than a mile in length - a nice enough little loop.  Although I imagine that it was just as tick-riddled this summer as the fields and roadsides around my house.  Now that summer is gone, so are the ticks.  Life is much improved. 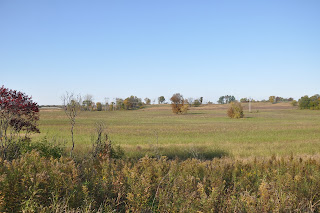 The next set of sunny days we have when I am off, we'll be back at Sharon Mills to check out the trails behind the mill - I am looking forward to it.
Posted by Ellen Rathbone at 8:09 AM