Well...y'know, they don't call it "fall" for nuthin', nosiree.  This time of year there's all sorts of stuff falling out of trees.  Why, one might just be advised not to go out one's front door without wearing a hardhat!

Sure, we all know about the leaves turning color and falling to the ground: 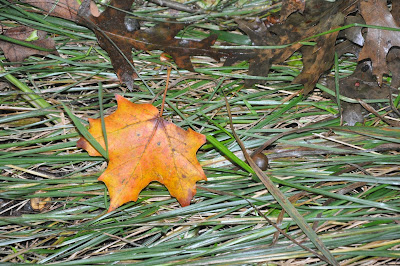 And then there are the random assorted nuts that come plopping down: 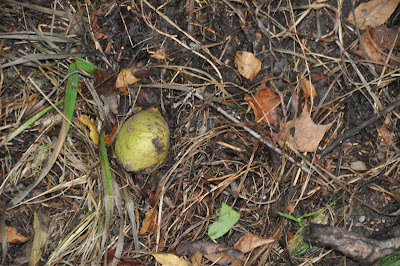 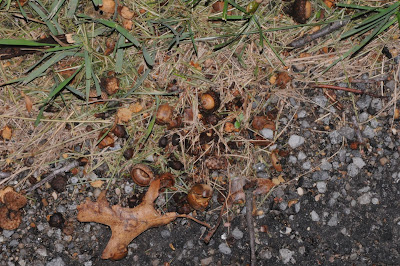 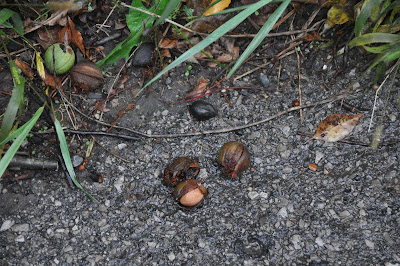 hickory nuts
And every so often a caterpillar may come tumbling out of a tree, or swing in the air as it lowers itself down on a silken line: 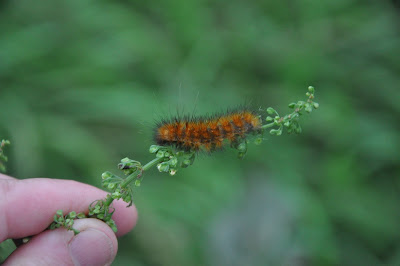 Sure, none of those should cause one trepidation - the worst that might happen is a walnut might conk you on the noggin, but it won't do any real damage.

But the other day, while Toby and I were on our evening stroll, I saw these: 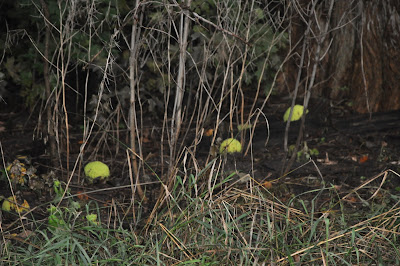 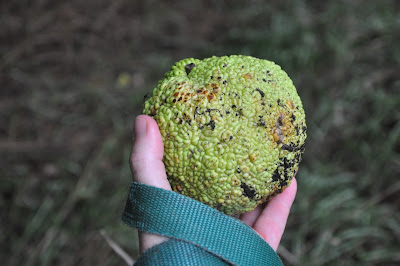 I haven't seen one of these since my dendrology days in college - 1985!  And those were specimens planted as ornamentals in a cemetery near campus, and they were small trees (key word being "small," as in 6-8' tall at most).  Where we were walking that evening, there were no "small" trees.

I looked around...and up.  And there they were - up high in the branches! 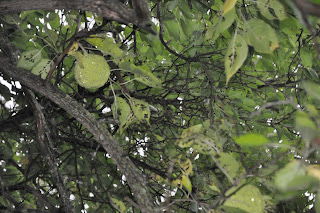 The bark is characteristically deeply furrowed.  And there were quite a number of them, all planted in a row along the road's edge.  Their presence here was intentional. 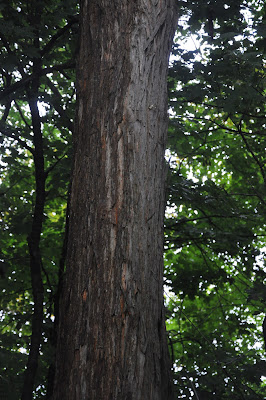 I wracked my brain to see if I could remember anything about osage oranges, and nothing came to mind, except that one of my friends referred to them as brain fruit (the knobby green balls look sort of like brains).  I asked at work - are osage oranges native to Michigan (I kind of had it in mind that they were southern trees)?

It turns out the answer is yes and no.  The osage orange (Maclura pomifera), aka horse-apple, was apparently only found historically in parts of Oklahoma, Texas and Arkansas.  How on earth did it end up here in Michigan, or anywhere else, for that matter?  It's not like a squirrel is going to grab one of the fruits, run off with it and bury it somewhere - the fruit probably weighs at least three times as much as a squirrel!  Ditto birds.  And the wind certainly isn't going to carry it off to places unknown (well...maybe some of those tornadoes, for which Oklahoma is famous).

As with so many plants, it turns out that man was the agent of its dispersal.  Not for the fruit (I'll get to that in a moment), but for the wood.  Along with black locust, osage orange was highly desired for the making of fenceposts.  It is a sturdy, hard wood, and it is slow to decay.  It is also, apparently, fairly resistant to many insects.  So, as people moved around the West and Midwest, herding their cattle and whatnot, they needed to mark their borders and keep the livestock contained.  For that, they needed fences, and the wood of this tree was ideal.  Therefore, it behooved these settlers to bring the trees with them as they moved - and seeds are a whole lot easier to pack than fence posts and whole trees (or at least they were over a hundred years ago, before haulage firms were around to cart massive loads from one part of the continent to another).

What about the fruits, though?  Are they edible?  They certainly don't look terribly appealing.  Well, I was dying to know what the inside of an osage orange looked like, and I'm sure you are, too.  So, I brought one in to work, where I just happened to have my hatchet.  A couple good whacks, and here we are: 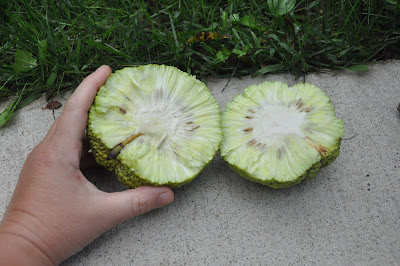 Ta-da!  Not quite what you were expecting?  I didn't know what to expect, so I would've been surprised by anything.  Essentially, it is a solid mass of...well...stuff.  The brown bits toward the center are the seeds, each of which is tethered by fibers to a lump on the outside.  Sometimes the fruits have no seeds at all.
The very center of the fruit is solid, and as we stood there marveling at it, the center started to ooze. 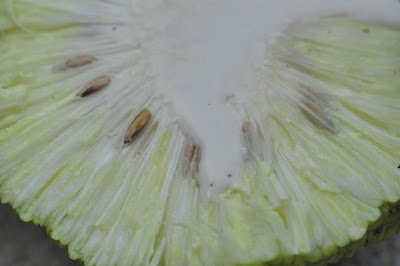 The thick white sap is a sticky latex, not unlike that found in milkweed and dandelions (I know, for I stuck my finger in it).

For the most part, the fruits are inedible (no kidding).  The literature says it's not, strictly speaking, a poisonous fruit, but if you attempt to eat it, you may end up with a serious case of vomiting.  You've been warned.  Sometimes squirrels will tear the fruits apart to get to the seeds, but I'll bet it isn't very often - even squirrels don't want to get covered with the sticky sap.

So what in the world is the evolutionary purpose of such a fruit?  Like I said, nothing (really) eats it, the wind can't blow it, animals don't carry it off to bury - so how in the world can it spread?  If the fruits just drop at the base of the tree, and maybe roll a foot or two, it isn't going to increase its range except maybe at a glacial pace.

Well...and this is very cool...a recent hypothesis  has been put forth that this fruit was once eaten by (drum roll please) a giant ground sloth!  And there were four species of these critters around during the Pleistocene, two of which (Jefferson's and Harlan's) called the Midwest home.  These guys were about the size of an ox.  Here's an artist's rendering of what one might have looked like:

(http://exhibits.museum.state.il.us/exhibits/larson/sloth.html)
And, amazingly, they ranged about the same part of the future US (sort of) as the osage orange trees!

(http://exhibits.museum.state.il.us/exhibits/larson/sloth.html)
These giant herbivores hung around with mammoths, mastodons and gomphotheres, all of which went extinct shortly after the first humans came on the scene.  Hm.

Some think that there was a now-extinct horse ancestor that also might have enjoyed the fruits and spread the seeds around, based on the fact that modern horses sometimes gnosh on the fruits.

As for me, I'm just grateful that one of these massive fruits hasn't falled from the trees as I walk or drive under them.  I imagine it could put quite a dent in a car roof, and likely break a window.  It certainly would hurt if it hit one's head.

So, what did I do with the orange after we opened it up to see its innards?  Well, the literature said they float, so I lobbed the pieces into our pond, just to see.  Lo! and behold, they floated!  Maybe Todd the Turtle would try sampling them.
Posted by Ellen Rathbone at 1:21 PM