What a beautiful day we had on Sunday - another in a serious of glorious days.  Possible rain was in the forecast, but it never materialized, which was terrific because I had a paddle planned with GREAT, the Grand River Environmental Action Team.  Every month from April through October they sponsor a paddle on one of the waterways in south central Michigan.  Sunday's trip was to Kent Lake, a man-made lake north of Ann Arbor, where the Huron River was dammed.  The lake is located in a very popular county park:  Kensington Park.  And the big draw...well, you'll see it in a moment.

Over 20 boats set out from the boat launch - canoes and kayaks both.  Other water vessels on the lake included sailboats, motor boats, pontoon boats and paddle boards, but the lake is big enough (1200 ac) that we were not crowded. 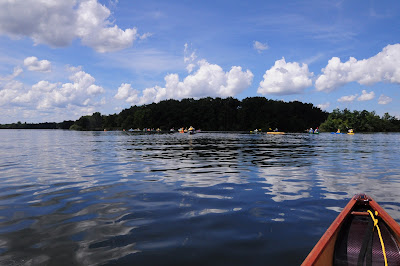 Are those vultures in the tree? 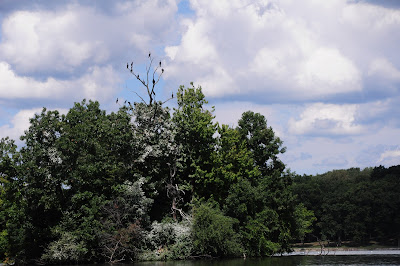 Nope - they are cormorants.  Apparently this is their place - every year these birds hang out on this tiny island, perched in this dead tree and on other branches around the back side of the island.  They were fairly oblivious to our group, eying us on occasion, but mostly getting on with their preening and sunbathing. 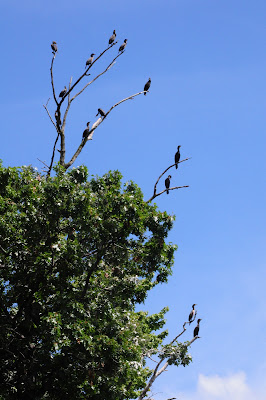 In the far distance you can see our destination:  that low band of light green. 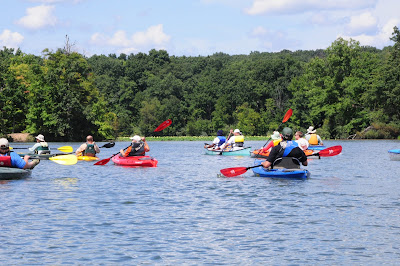 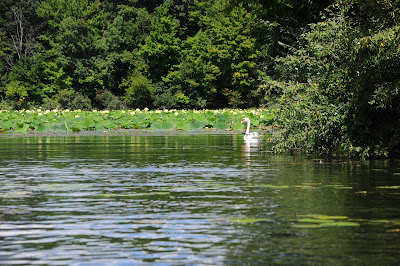 but the lotuses!  American lotus - a rare plant in Michigan, it is much more common further south.  This patch appeared suddenly in this lake about seven or eight years ago.  No one knows for sure how the first plants arrived, but it could've been via people or wildlife, people, of course, being the most likely route. 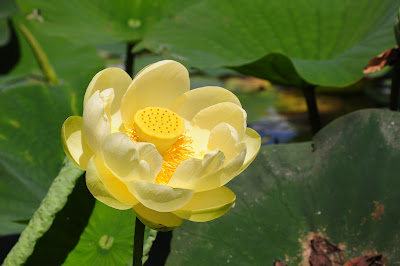 Just how big are the flowers?  Take a look below! 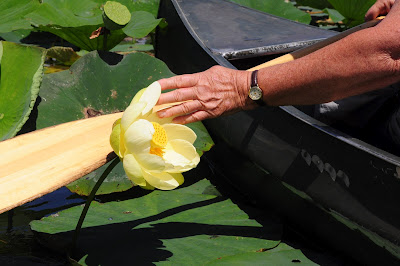 The large leaves stand upwards of two feet above the water, and the colony is quite dense. 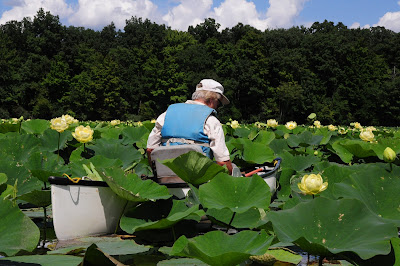 The lotus was once an important food plant to the native peoples, who ate both the seeds and the roots. 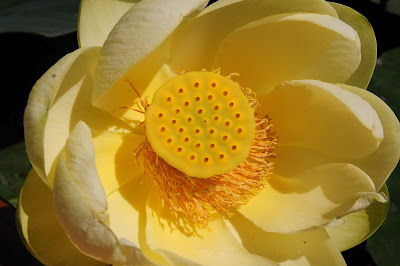 You might recognize the center of the flower, and the dried pod below, from dried flower arrangements. 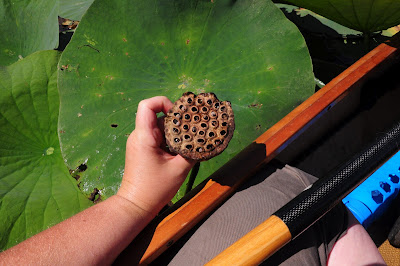 I shook out some seeds and will chuck 'em in the pod at work to see if they will grow. 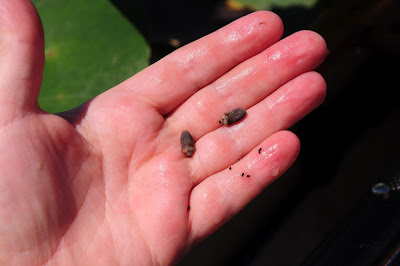 I managed to paddle through the pads and get up close to many of the flowers.  They are just spectacular. 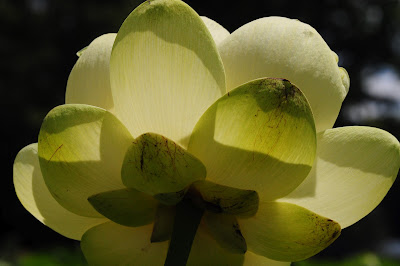 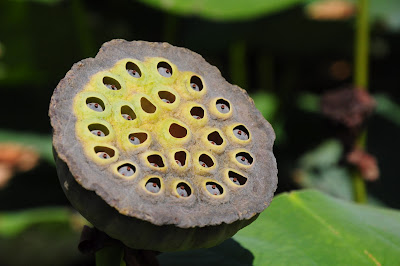 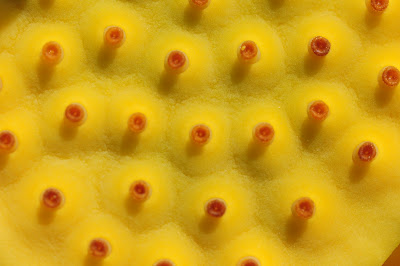 One of the really amazing things about the lotus is the leaves.  The surface of the leaf has microscopic structures that work to repel water.  It is so efficient at this that scientists are studying these structures to see how they can be copied for creating clothing that repels water.  I tried to shoot some video of the water rolling around on the leaf - not easy to do in a boat, holding the camera in one hand and manipulating the water on the leaf with the other, without tipping over.  It looks like mercury!  Remember those days when we were kids and someone would get a hold of a dollop of mercury and you'd watch it roll around on your hand or desk?  Water on a lotus leaf is much safer.


By the time I finished photographing the lotuses, the rest of the group had paddled on.  So, I took my time to tour the various coves around the islands.  I saw a number of turtles out sunning on the logs.  Most were map turtles - a new turtle species in the wild for me. 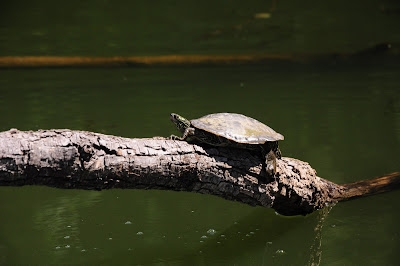 Typical of most turtles, they didn't hang around very long once they were aware of the approaching boat. 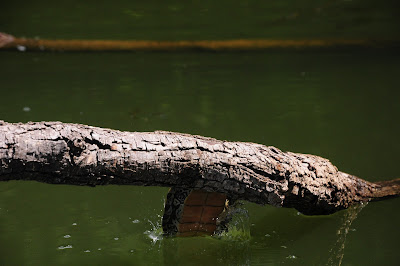 Three turtles and a duck.  Can you see all three turtles?  I only saw the big map turtle when I took the photo.  It promptly dove into the water, and then I saw the soft shelled turtle on the back end of the log.  The third turtle, which is in the middle and has its tail facing the camera - I didn't even see until I looked at the photos later that evening. 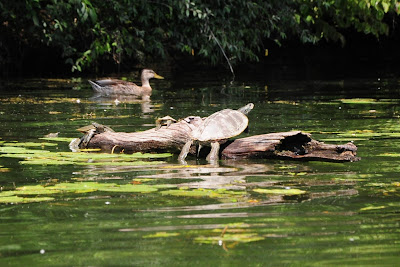 And this poor little green heron (or green backed heron, depending on your field guide)!  I saw him first in the shadows of one island and followed him for 15 or more minutes, drifting ever closer to get a photo.  He finally flew across the shallow water to another log, this time in the sunshine.  If you zoom in on the photo, you can see he's caught a damselfly. 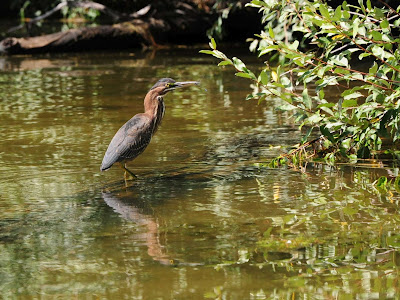 And here he is swallowing it. Gulp! 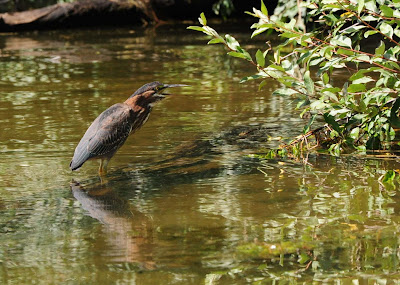 Shortly thereafter he turned his back and walked down the submerged log - just to get away from me.  I let him go.

All too soon it was time to head back.  The folks from GREAT had loaded most of the borrower boats back on the trailers and were ready to go.  We bid them all farewell and thanked them for the opportunity to come out to Kent Lake and see the lotuses in bloom.

There were lots of buds on the plants, so if you'd like to go out and see them for yourself, there is plenty of time to do so.  It's well worth the trip to see these glorious flowers.
Posted by Ellen Rathbone at 11:19 AM