Along two sides of the veg garden I have planted a variety of native prairie plants.  Things are starting to come into bloom, which, considering the heat and drought, is a small miracle this year.  Last night I took the camera out to capture a few blossoms.

Slightly flattened, either due to wind or the weight of the plant itself, is the hoary vervain.  This (usually) tall, slender plant with its tufts of purple flowers has been blooming for most of July.  You can see how the flower heads have bent upwards now that the plant is lying down. 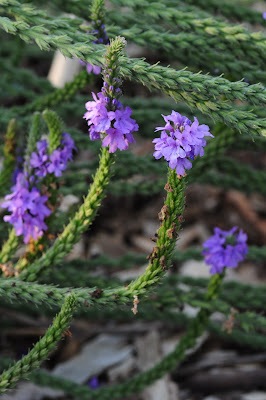 Both Culver's roots are in bloom.  Normally this prairie native stands over four feet tall.  This summer, thanks to the drought, it finally put out blossoms while still under two feet in height.  I guess it decided to forgo height in  favor of just getting some seeds made. 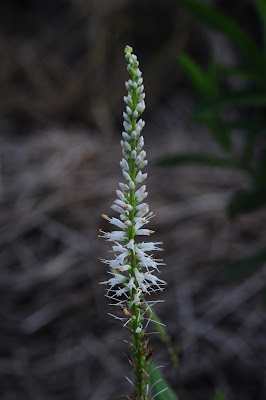 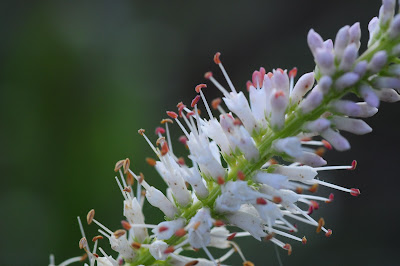 The first of the green-headed coneflowers opened this week. 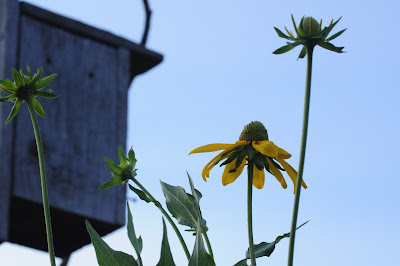 And just a short distance away the purple coneflowers are in full, glorious color.  Like the Culver's roots, these garden perennials are rather short this year. 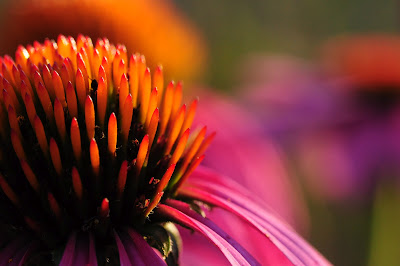 The rose mallow, which seems to struggle in the garden, has one blossom already blown, and one bud waiting to burst. 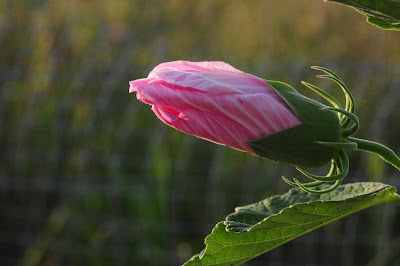 Horsemint has always been a favorite of mine.  The petals are described in Newcomb's as being yellowish with purple spots.  I've seen them with so many spots that the petals seem purple or pink in their own right.  These are definitely tending more toward the "yellowish," with colorful spots being few and far between. 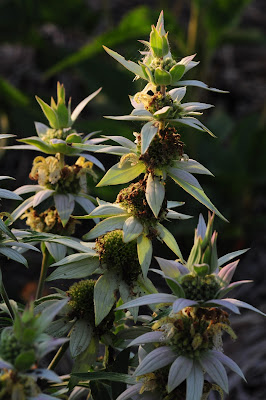 I knew a girl once who told me this plant was called dragon's tears - that's what her mom called it.  So for years, this was dragon's tears to me as well.  Now I know it is actually called obedient plant - a much less dramatic name.  I was also surprised to learn it is a native wildflower - it always struck me as a genuine garden plant - one of those that folks plant because natives are "boring."  Ah...if only they knew! 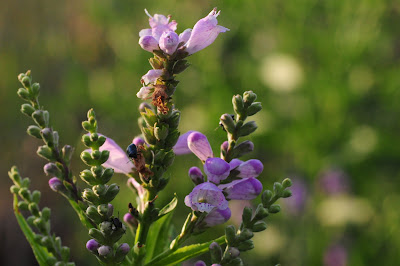 This gorgeous rose-bud-ish  flower is actually giant St. Johnswort.  I have two of these plants in the garden and this is the first bud I've seen.  I can't wait for it to blossom. 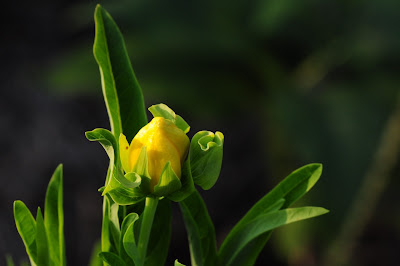 Liatris is another fairly common garden flower, but I'll bet you've rarely seen one that looks like this!  This is rough blazing star - another member of the Liatris clan, but a native of the harsh, dry prairie.  The buds are only just starting to get some color - should be starting to bloom this weekend I imagine. 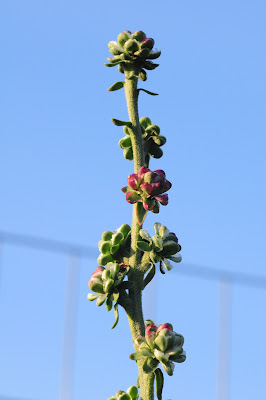 And even if this flower never had any more color than it does now, I think it is just beautiful!  However, this is the flower head and it's still only sporting tight buds.  The plant is the giant yellow hyssop, and already it is approaching 3.5 feet in height.  I am looking forward to seeing the flowers. 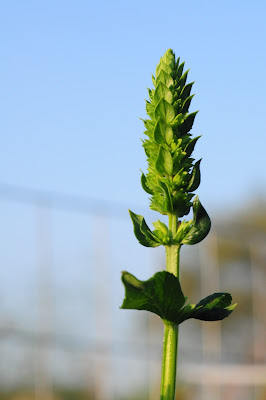 I planted this perennial because I love the name:  compass plant.  It is supposed to get quite tall, with these large, deeply cut leaves.  The flower, when it finally produces one, is yellow, looking much like the yellow coneflowers, the tickseeds, and the rudbekias that populate the plains.  It's a Silphium, a name which I also like.  This makes it a relative of my beloved cup-plant, which is also native out here and not considered an invasive like it was in NY.  The cup-plant I planted last year is still quite small - no flowers this year, but I'm sure in a couple years it will tower over the garden.  And, just because I love factoids like this, there used to be an enormous Silphium in northern Africa that was THE plant to use for birth control back in the days of the Greeks and the Romans.  It was so popular that it was wiped out - harvested to the point that it could not keep up with demand and today it is extinct. 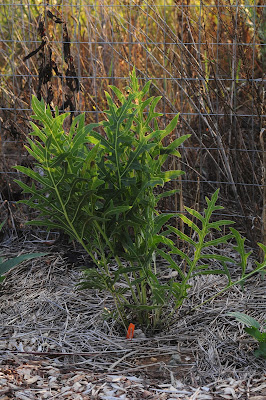 Meanwhile, the field that is part of my property sports not a single native wildflower (well, no, that's not quite true - there are a few small clusters of milkweed).  I hope to eventually convert it into native plants - when budgeting allows.  As it is, the native bees (and hummingbirds and moths and butterflies) are highly dependent on gardens around here - there's hardly a native flower to be seen for miles around.
Posted by Ellen Rathbone at 9:55 AM