While out with a group of students doing a compass exercise in July, I came across this wonderful foliose lichen: 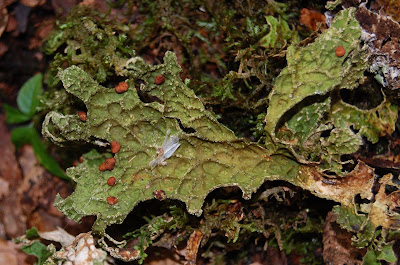 It was huge! Easily six to eight inches long, three inches wide per leaf. But I had no idea what it was.

Fast forward to last week. A friend of mine, who is a botanist of the old-school type (knows her plants all by their scientific names), knew right away what it was: Lobaria pulmonaria, or Lung Lichen. According to Evelyn, it is an indicator of clean air, and grows on high calcium tree bark. In these parts that is usually sugar maple (and indeed I found this specimen at the base of a large sugar maple). Lung lichen is also extremely sensitive to toxins, which makes it a wonderful indicator of ecosystem health. According to Wikipedia, it is often found in climax communities, such as old growth forests of the Pacific Northwest.

Here are some other interesting factoids about this lichen:

Most of us have learned at some point in our education that lichens are actually composed of two different living organisms: a fungus and an alga. Well, our friend L. pulmonaria is apparently a symbiotic organism with three components: a fungus, an alga and a cyanobacterium. The cyanobacterium serves as a nitrogen-fixer, just like legumes such as peas, beans and clover function in your garden or lawn.

All in all, this is a nifty "plant." Keep your eyes open when you are out tramping through the woods - you never know what fascinating thing you might stumble across!

Email ThisBlogThis!Share to TwitterShare to FacebookShare to Pinterest
Labels: lichens