What a great day for a paddle on the lake! The sun was out, the air was warm, a light breeze tickled the water just enough to make the humidity seem negligible. 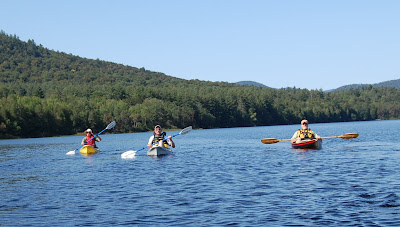 I had six people join me today for a spin around the lake. Usually I head up towards the wetlands on these trips, but today I decided to take everyone down the outlet instead, which made for a more interesting paddle as we explored all the coves and bays, got close to the vegetation, and played a bit with the current. I only got hung up on one rock - not bad.

So, off we went, exploring Graveyard Bay first. Paddlers get a great view of some of our trails and overlooks from the water. Here is the Graveyard Bay Overlook. 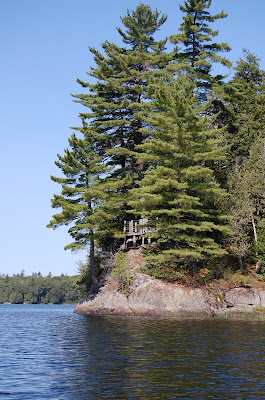 As we left the Bay, we paddled around the end of the peninsula and headed for the outlet of the lake. I was surprised that even with the high water we were able to see the unusual rock formations along the north side of the peninsula, where the softer rock has been worn away by the water, leaving miniature caverns behind. This is one of those great places for someone with an imagination: imagine you were only two inches high and had a boat to fit - you could paddle in and out of those water-filled "caves" - it would be a terrific experience! 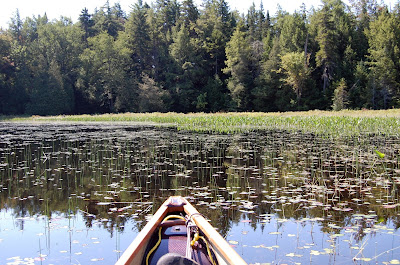 From there we mosied into the bay where the floating boardwalk crosses the marsh. No moose, but several damselflies, a few fragrant white waterlilies, and plenty of other aquatic plants. 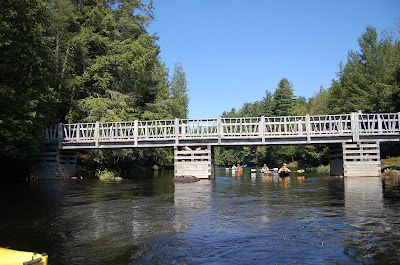 Back into the outlet, we headed downstream, under the upper bridge of the Sucker Brook Trail. The current picked up here and we had a nice drift down the outlet. We talked about beavers, warblers, and otters. I pointed out where the otters play in the winter and where the beavers have flooded the forest at the end of the Little Sucker Brook. When we reached the lower bridge and the take-out for the carry to Belden Pond, we turned around and headed back upstream. All along the way the cardinal flower took our breath away. 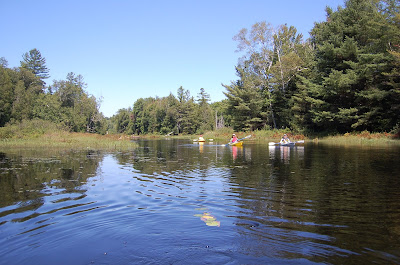 As we headed back across the mouth of Graveyard Bay, most the group opted to continue up to the wetlands at the western end of the lake, so off we went. Along the way we saw two loons, and a bald eagle took off from a white pine and reached the wetlands before we did. It was an adult - the white tail a dead giveaway.


Two more of our group turned back shortly after we entered the wetlands. The current was quite strong, but the rest of us forged ahead. Fighting the current, two of us made it over the upstream beaver dam and then cruised out over the two downstream dams. I was disappointed by the amount of flowers still in bloom in the wetland: almost none. We had a few pickerelweeds, one buttonbush, and a couple more cardinal flowers. No milkweeds, no Joe Pye weed (although it is still blooming down the outlet), no swamp candles. There were very few dragonflies, too. 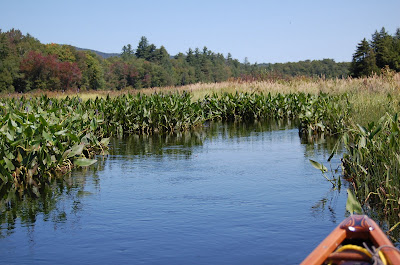 The wind now behind us, we paddled back down the lake to the beach, joining up once more with the rest of our group.


All in all, it was a great day for a paddle. The only things that could have improved it would've been otters and moose.
Posted by Ellen Rathbone at 2:58 PM

Email ThisBlogThis!Share to TwitterShare to FacebookShare to Pinterest
Labels: canoe