Another Day on the Bridge 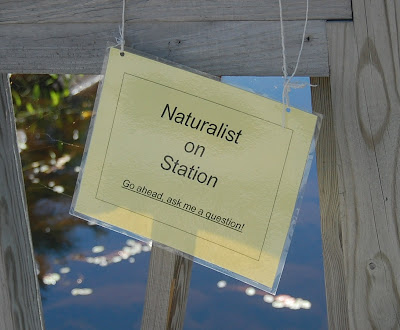 I spent a pleasant two and a half hours this morning staking out the upper bridge again. At 9:30 it was very nice outside - cool air, a warm sun, and the occasional breath of a breeze. By noon the sun was quite hot and fortunately the breeze had also been kicked up a notch. All in all, a delightful morning weather-wise. 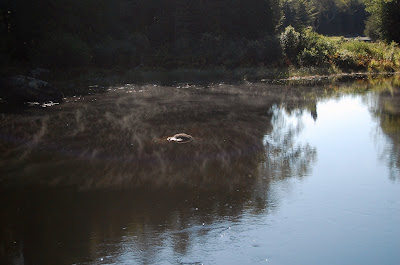 When I first arrived, mists were spooling off the shoreline and out across the surface of the water, where the breeze grabbed a hold and gave them a swirl before sending them upstream. Thanks to the breeze, the mists looked just like northern lights dancing on the water. And as fleeting as the aurora are, so were the mists. It was captivating to watch.

No much happening in the wildlife department though. No squirrels daring to cross the bridge, and most of the birds either kept to the woods (where I could hear them but not see them), or were hawking for insects above the water two bends downstream - I could just see them as the sun glinted off their wings. 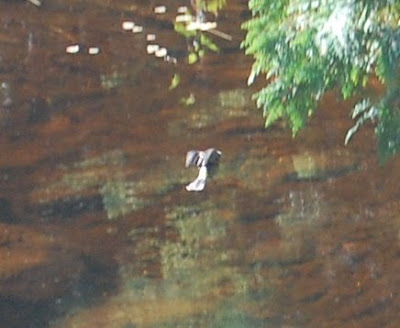 Here is our friend the butterbutt (yellow-rumped warbler) nabbing an insect before darting back into the cedar. This all happens in the bat of an eye - so I'm lucky the photo is as clear as it is!

Insects, though, were numerous. Only one mosquito attempted to snack on me, but down on the water insects by the thousands lurked. Water striders, beetles, and assorted mystery insects. At one point, the angle of the sun was just right that when it glinted off the wavelets made by the insects as they touched the water, it looked like a stadium where hundreds of flashbulbs are going off continuously. Unfortunately, this does not translate in a still photo.

I was lucky to get a dragonfly and a couple damselflies calm down long enough for me to take their portraits. Here we have a yellow-legged meadowhawk (Sympetrum vicinum) female: 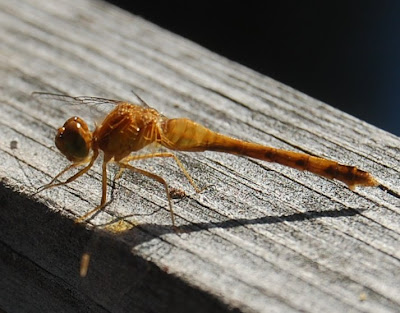 This particular dragonfly is one that flies late summer through fall, often one of the last dragonflies seen flying up in these northern climes. 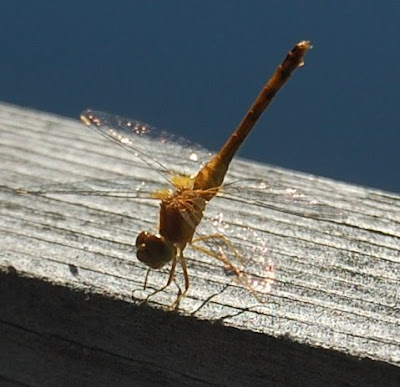 When dragonflies do these handstands (the technical term is obelisking), holding their bodies almost vertically above their heads, they are trying to cool off by presenting as little of themselves to the sun as possible. 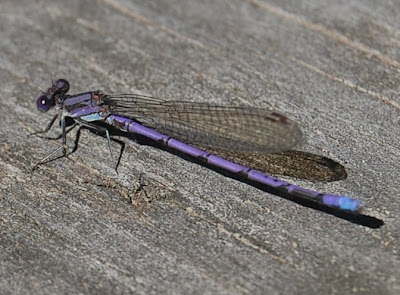 I also was able to snap a couple shots of this lovely damselfly, which I think is a variable dancer (Argia fumipennis). It was very skittish. Can you see the purple eyespots on the head behind the eyes? They look like a set of dumbbells. Eyespots can be one of the keys to identifying damselfly species. 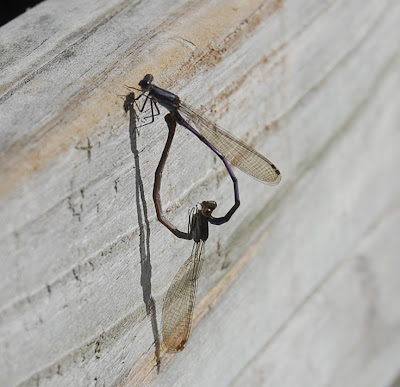 These two damselflies (species unknown, but I suspect they are also variable dancers) are mating. I kept seeing them flying around, the male clasping the female behind her head. They would alight on the bridge and if all was safe, she would bring her abdomen around to receive the sperm packet from the male. Apparently this process can take anywhere from three seconds to more than an hour to complete).


So I guess in the end is was an Ondontra morning (that's the name of the order of insects to which dragonflies and damselflies belong). Dragonflies and damselflies are the hot insects to study these days. There are several user-friendly books available now for identifying these insects (such as Dragonflies Through Binoculars and the Stokes Beginner's Guide to Dragonflies), and New York has an on-going dragonfly atlas program. An atlas (whether breeding birds or dragonflies) is basically a mapping program of where the animal in question is found. For more information on the dragonfly and damselfly atlas, go to http://www.nature.org/wherewework/northamerica/states/newyork/science/art16938.html.
Posted by Ellen Rathbone at 12:31 PM