One of the "programs" we do here is called "Naturalist-on-Station," which involves one of our staff standing (or sitting) out somewhere along one of the trails waiting to answer all the natural history questions of visitors who stop by. Today I was the NOS. I took up my place on the upper bridge that crosses the Rich Lake outlet and lay in wait, like a spider on a web. I ended up with about 14 visitors stopping by, but the neat stuff was, as always, courtesy of Mother Nature.
Wildflowers 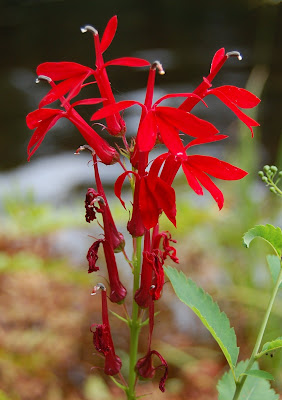 The star right now is cardinal flower (Lobelia cardinalis). It is in full bloom and out in prodigious numbers. Some visitors and I even got to watch a hummingbird zip around the flower heads to feed. Some of the warblers that were in the cedars dashed after the hummer, possibly thinking that it was a giant insect and would make a great meal. More on the warblers later. 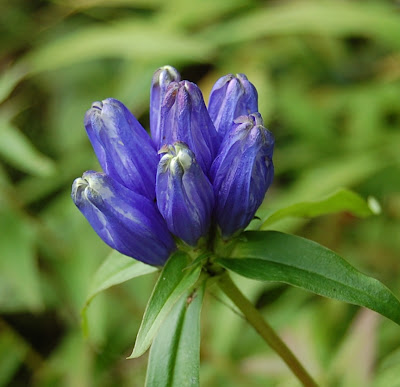 Also out in copious numbers are the narrow-leaved gentians (Gentian linearis). I always want to call this one a closed or bottle gentian, and while it looks the same flower-wise, the leaves are different. I was very surprised to see so many blooming this late in the season. They make a nice combination with the cardinal flowers.
Joe Pye weed (Eupatorium dubium) is still blooming, and the late summer standbys are looking beautiful, too: goldenrod (Solidago spp.), and asters (Aster spp.)

Birds
Lots of little birds were hanging out in the cedars. They were darting from there out to nab a passing insect, then dashing just as quickly back to the shelter of the trees. This made it very difficult to get an ID. Still, I was able to glimpse a yellow rump, so I'm sure they were yellow-rumped warblers, aka: butterbutts (Dendroica coronata). I also saw a warbler just inside the woods that as it flew gave a flash of bright blue all along its sides and back. Striped. I really wanted it to be a cerulean warbler (unlikely, but possible), but I was unable to get a close up to be sure. By the time I got the binocs out and returned to the spot, the bird had of course disappeared. In retrospect, I suspect it was more likely a black and white warbler (Mniotilta varia), which I know we have here.
Also on the list for today was a great blue heron (Ardea herodias) flying gracefully downstream as a family in a canoe paddled by, and a sanderling (Calidris alba). This little guy was constantly in motion: tail wagging, head bobbing, fluttering from rock to rock before it flew under the bridge and up the lake. A short while later it flew back under the bridge and downstream, from whence it came. 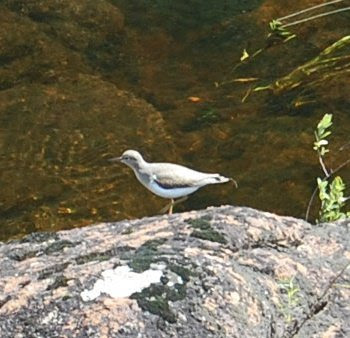 Wildlife
No moose or bears, but I had a fun encounter with a red squirrel. I was looking over the railing when I heard patter of little feet to my right. I turned my head to see a young squirrel tripping down the bridge toward me. And then the squirrel saw me and screeched to a halt. He didn't know what to do. One jerky hop at a time, he came closer and closer, but just as he pulled up parallel to me, I guess it became too much for the little guy and he turned around and scampered back the way he had come. Collecting his courage, he slowly hopped back towards me. Slower and slower. He got behind me. Hop. Pause. Hop. Pause. And then, as soon as he was an inch beyond me, he took off like a bat out of hell, making a mad dash for the end of the bridge! Success to the brave of heart!
Posted by Ellen Rathbone at 12:32 PM