Another Nifty Insect and a Spelling Lesson

I love http://www.bugguide.net/ - it is a great website for identifying insects! Thanks to their help, this lovely insect I found the other evening has been identified as a Goldenrod Leatherwing (Chauliognathus pensylvanicus), alternatively known as a Goldenrod Soldier Beetle and the Pennsylvania Leatherwing. 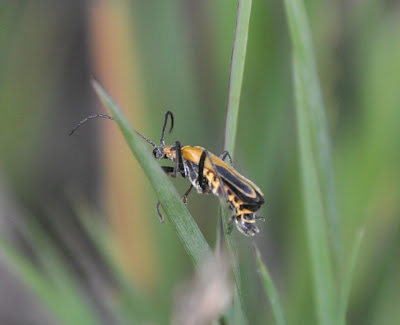 First I saw one, as it flitted around the spotted knapweed (Centaurea maculosa), but then I saw pairs of them, clinging to each other as they clung to the blossoms. 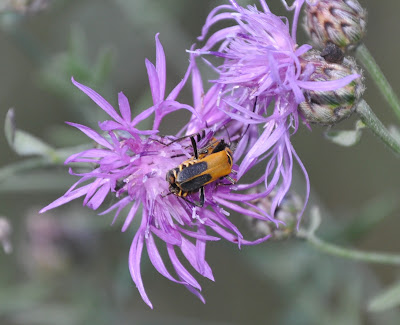 I had my work cut out for me chasing them down to photograph.

Anyway, these insects are found in old fields (or, in this case, along roadsides) where there are plenty of flowers. The adults feed on nectar and pollen, but are also predatory, supposedly eating locust eggs and cucumber beetles, although references I found could not say for sure if it was the adults or larvae that ate the eggs and beetles.

Eggs are laid in the soil, and it is also in the soil that the larvae pupate in the spring. Adults are found in late summer and into the fall, most often on goldenrod (hence the name). The ones I found this evening were all on knapweed.

Now, some of you might question the single "n" in pensylvanicus; after all, Pennsylvania has a double "n." Well, it turns out that when DeGeer named this insect in 1774, the single "n" was commonly accepted in the spelling of Pensylvania (and similar words, like pensylvanicus). Because this was so, and not merely a typographical error, the rules of scientific nomenclature dictate that it stays as it is. So, the single "n" is correct, and anyone telling you differenly is wrong. There's a very good write-up about this over at bugguide.net if you don't believe me.

Posted by Ellen Rathbone at 3:31 PM