On Saturday, during Rock Fest, I was lucky to get assigned to follow along on Paul Hai's Tour of the Tahawus Mine. I've been up to the Upper Works several times, and have looked at the old blast furnace that sits by the road, but this was nothing compared to actually getting a guided tour by someone who knows (and is passionate about) the mining history of the area and what all the bits and pieces are.


A caravan of close to 30 people followed Paul up the road to the mines (County Route 25, off the Blue Ridge Road, about six miles east of the Newcomb VIC). We consolidated people in vehicles and drove the rest of the way to the Upper Works, the trailhead parking lot for the southern entrance into the High Peaks Wilderness Area. This parking lot, by the way, was where the old charcoal kiln was located. The early mining operations made charcoal from the local trees to fuel the fires in the various furnaces.


From here you'd never know it, but just a short distance into the woods are the remains of the first blast furnace that was built in this area (c. 1844). It was a cold blast furnace. 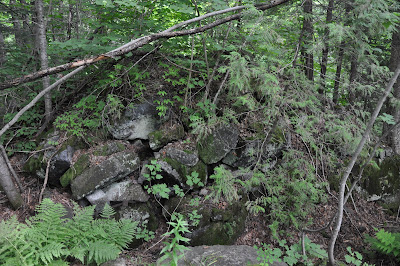 This furnace had been preceeded by a bloomery forge, but I don't know if there is any evidence of this left in the woods.


A bit further into the woods you find the remains of the wheel house that drew water from the Hudson River and used it to force cold air into the furnace, providing the necessary oxygen to get a good fire going to melt the ore. No ore pit or evidence of digging has been found in the area; they suspect that the ores were mined/found near the surface. 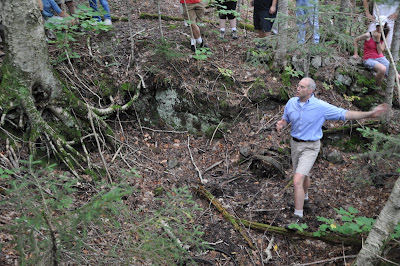 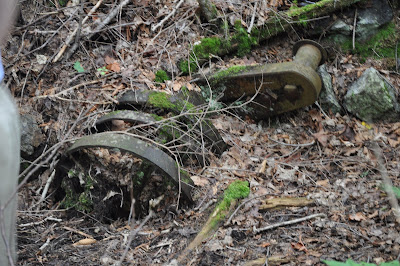 In a few short years, this furnace was obsolete (or perhaps too small to handle the growing operation). A new one was built up the road - this is the one that has been preserved and sits right along the roadside. 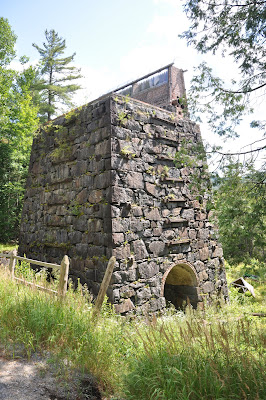 On top of the furnace is the hot blast stove, which is now protected under a plexiglass roof. This is what produced the hot air to help stoke the fires below.

Apparently this furnace is a bit of transition technology: it was built using technology for coal fired furnaces, but it used wood (charcoal) as a fuel source instead. It's also a hot blast furnace, another advance in technology - using hot air instead of cold air made the operation more efficient. Ore was brought in from across the road via a bridge to the top of the furnace (you can see the bridge foundations on the other side of the road) in ore carts. It was then crushed by a set of ore stamps, the crushed rock falling through grates and into the furnace. The furnace was kept packed full of ore, and as it heated, it separated out to its constituent parts. This furnace was commissioned in 1849 but wasn't completed and operational until 1854. In 1857 the whole operation was abandoned. 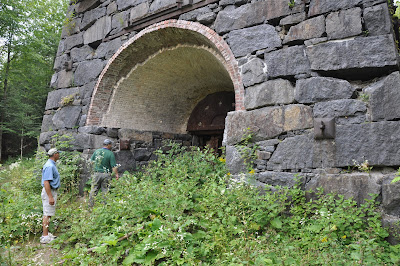 From the back of the furnace, you can see the opening through which the finished product emerged (you can see this better below, next to the STNR/TOOTS artwork). 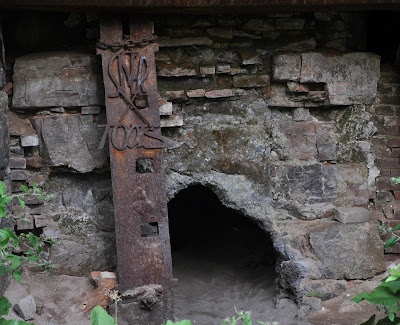 No one knows what this bit of "artwork" means or what is it from. SNTR? TOOTS?

Anyway, the molten iron flowed from the hearth into a channel called a sow, and from there into molds on either side, called pigs (apparently someone thought this resembled piglets suckling from a sow). The iron filled these troughs (the pigs) and formed bars, which were subsequently called pig iron.

Paul actually had a piece of the original pig iron; even though it is only about a foot and a half long, it is very heavy. 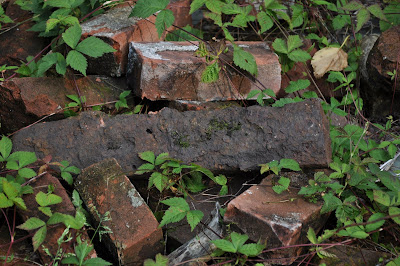 Around the site you can also find bits of slag left over from the ore separation process. 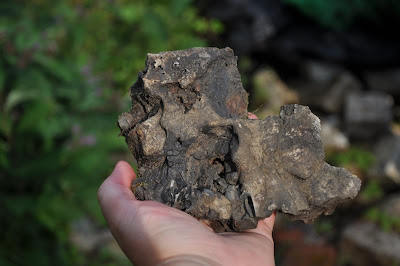 This is a shot I got looking up the chimney of the furnace. I simply stuck my camera into the opening (seen above) and pressed the shutter release. It came out pretty well. 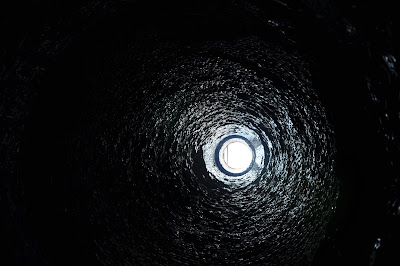 If you walk, carefully, behind the blast furnace you come to wheel house that operated the furnace. Several times larger than the original outfit, this wheel house had a dam and flume that dropped the water down over massive wheels which powered the the machinery. The water then flowed under the works and down a raceway back to the river. Paul talked about lots of things here, but the only bit that stuck in my mind was the driveshaft they made, with a 90-degree bend, that went up the hill to the furnace to operate the ore stamps. 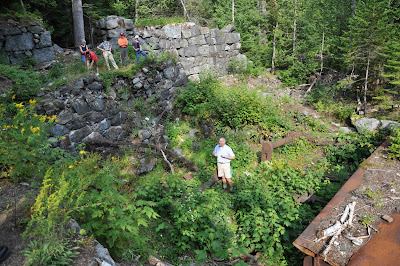 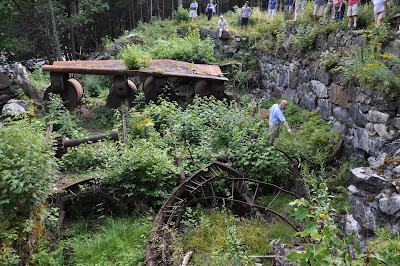 Between the "new" and the "old" furnaces, several buildings in various stages of decay line the road and dot the woods. These are the remains of the old town of Adirondac. Adirondac (aka: McIntyre) was actually a ghost town twice... it's a rare thing for a community to flourish, become abandoned, and then flourish again before being abandoned for the final time. Why was it repeatedly abandoned? The iron produced at this site was of very high quality, but not reliably so. There was an impurity in the ore that made the iron hit or miss. That impurity turned out to be titanium dioxide, which became important during WWII, and in 1941 Tahawus was reopened as a titanium mine. 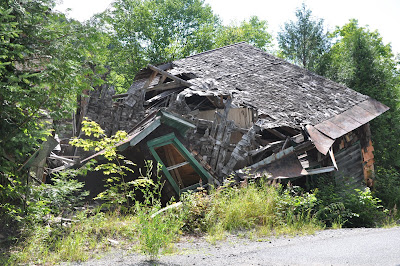 The McNaughton House has been stablized. There are plans to preserve it as part of the historical preservation of the area. 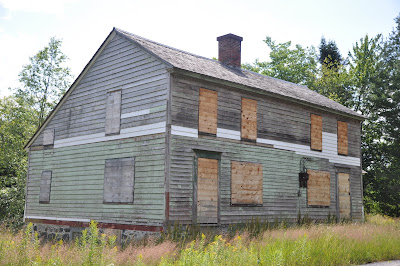 In between times, when the mines were not in operation (roughly the 1860s through the mid-1890s), the area was taken over by the Tahawus Club, a hunting and fishing club that became a resort for the affluent. The Tahawus Club still exists, but it has relocated to the other end of the road to the Upper Works.

From the Blast Furnace we drove on up into the mine proper, which is officially called Tahawus. This is not open to the public. We had special permission to be there as part of Rock Fest. Tahawus was the titanium mine...and this is where the money was. 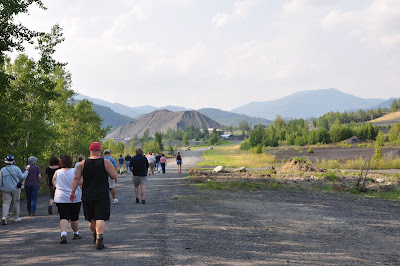 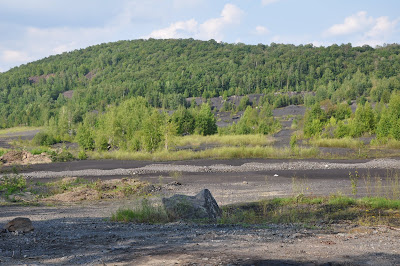 The lake seen in this shot is actually the mine pit. The mine closed in the 1980s and with the operation no longer operating, water filled the pit, creating what is likely the deepest lake in the Adirondacks. 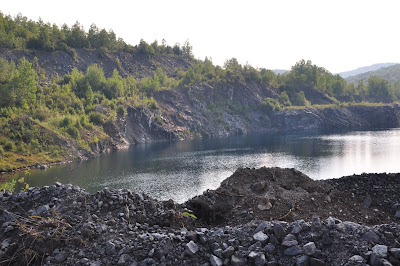 The village of Tahawus waas up along the southern "shore" of the pit (as seen on the left of this photo), and it was these houses that were moved, via flatbeds, to Newcomb when a line of ore was found underneath them. I actually live in one of these relocated mine houses. The "shore" is made from the tailings from the mine.

One of the biggest obstacles the mine faced was transportation. The quality of the titanium was (and still is) some of the best in the world, and they say there is still plenty down there. The problem, however, is getting it from the mine to the real world. Newcomb (and Tahawus) is in the middle of nowhere, the railroads no longer run, and trucks would have to drive a long way (at least the road is now paved and product would no longer have to be transported on sledges by horses). It turned out to be a whole lot cheaper to ship raw titanium from Africa to the States for processing than it was to bring it out from the Tahawus Mine. Hm...fuzzy economics, IMHO.

The buildings associated with the Tahawus Mine, and the mining equipment, have mostly been removed now. As you can see from these photos, very little is left.

If you are interested in a more detailed account of the Tahawus operation, and its future, you'll want to read the write-up at the APA website: http://www.apa.state.ny.us/Press/OSI_Tahawus.htm. We also have literature and architectural drawings of the furnace and wheel house available at the VIC.
Posted by Ellen Rathbone at 12:40 PM