Insects in the Garden

I did a drop-in program today titled "Insects in the Garden," the purpose of which was to introduce visitors to the flighted things that visit our gardens most often. I only had a few takers, but they were interested in seeing what we had.
Most of the garden's visitors today were bees and flies of one stripe or another. And even though it is technically a Butterfly Garden, there wasn't a butterfly to be seen.
As I stood there, sneaking up on insects, I finally decided to try and identify to species (!) some of the bees I've been seeing with relative frequency. Are there really many species visiting the blooms, or are there only a few? It was time to find out. 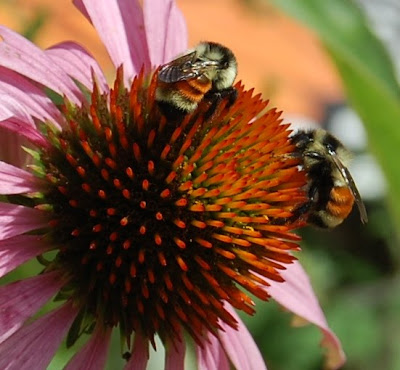 Many of the bees I've been seeing are these medium-sized, fuzzy bodied ones. What stands out are the orange sides. I paged through the photos in the Audubon Field Guide to Insects and Spiders and I'm fairly confident that these are Red-tailed Bumble Bees (Bombus ternarius). They are described as "robust and hairy," the male drones measring up to a half inch in length, while the Spring Queen may reach three-quarters of an inch. The adults sip nectar while the larvae eat honey. Like many bees, only the young, mated females overwinter, to start the next generation the following year. The field guide then notes that "unlike the honey bee worker, a bumble bee can sting many times." Hm - so much for the "bumble bees don't sting" statement I've been told for years and years. Still, I wander among the bumbles with relative ease these days and with the exception of one last weekend who repeatedly stung the tire of my lawnmower (I really wasn't trying to run it over - in fact, I gave every bee I encountered plenty of time to fly off before I mowed on). 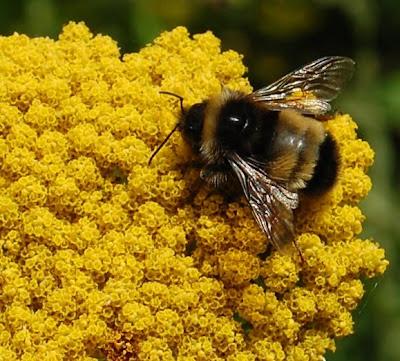 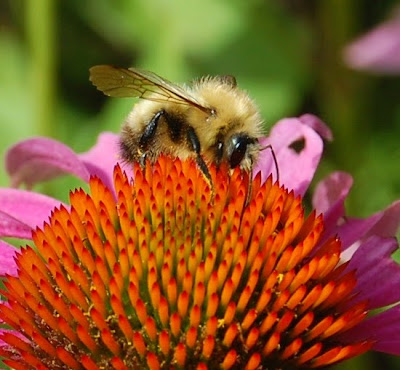 Ah, now this one is different. Note that it is mostly yellow. No red bands, no broad black band between the wings. I have no idea what species it is, though. 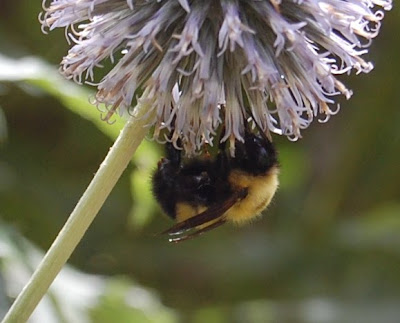 There were some bumbles out in the garden that were positively huge! Size is difficult to record on "film" unless one has a ruler handy, which I didn't (not that a bee would sit still enough for a portrait with a ruler). This was one of them, though. The globe thistle upon which it is nectaring probably measures two-and-a-half inches across. Could it be a Golden Northern Bumble Bee (Bombus fervidus)? Also described as "robust and hairy," the Golden Northern queen can reach 7/8" in length. The face and head are mostly black and it also sports a black band between the wings, although the description goes on to say that the female has a mostly yellow thorax. And the wings are smoky. Sounds pretty close, doesn't it?
Not a single honey bee was to be found, though.
Posted by Ellen Rathbone at 2:56 PM