A Walk in the Park

I had an aftershool program yesterday afternoon down in North Creek. I arrived early to get some guidance from Evelyn, who showed me where I lost the trail when I was here on Monday. And, of course, we botanized a bit. 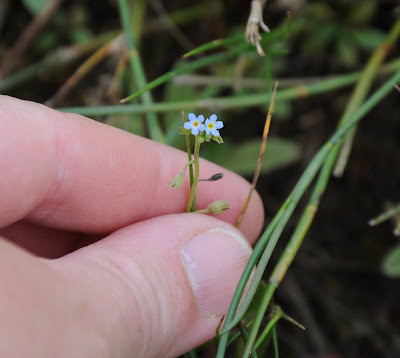 This sweet little flower is Smaller Forget-Me-Not (Myosotis laxa), a native forget-me-not, and so very very tiny! It is amazing that anyone can find them! 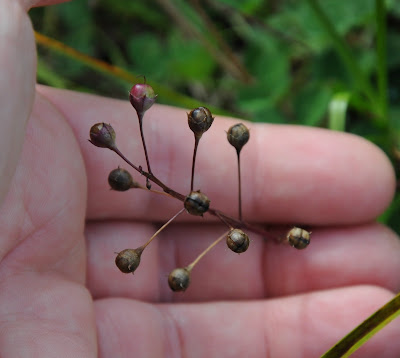 We were looking for Slender Gerardia (Agalinis tenuifolia), a small, pink, snapdragonish flower. First Evelyn spotted the seed pods. It is late in the season, so our hopes of finding a flower started to flag. 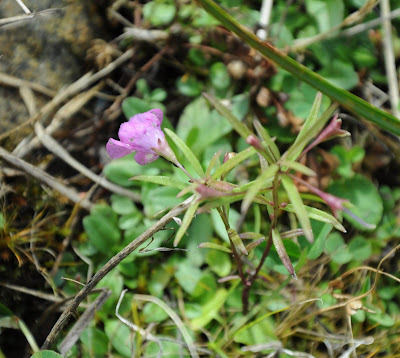 But at last she found two, one of which fell off as I moved a grass to take a photo. 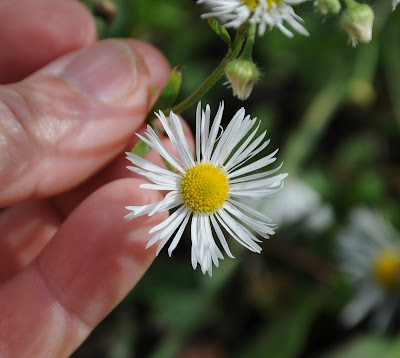 This lovely daisy-like flower I believe is Lesser Daisy Fleabane (Erigeron strigosus), also known as prairie fleabane. It is growing in a lovely clump just off the beach at the Ski Bowl. It's not listed in the Audubon Field Guide to North American Wildflowers, and only has a mention in passing (no illustration) in Newcomb's. 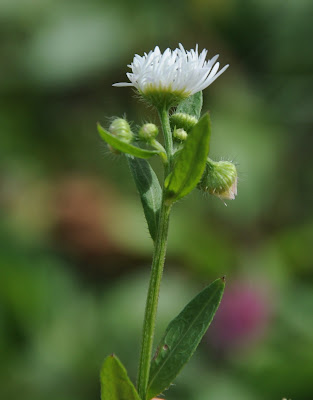 But at least Newcomb's gave a description, which pretty well fit this, the key being nearly entire leaves and stem hairs that lay close to the stem (rather than sticking out). 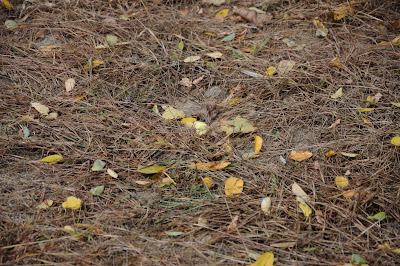 Can you find the butterfly? 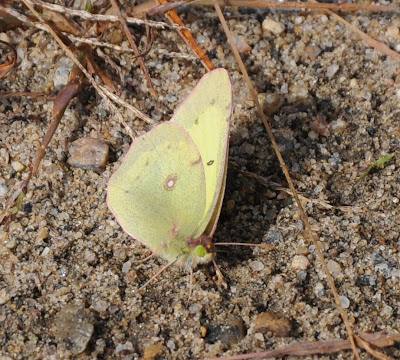 It's a Pink-edged Sulfur (Colias interior), and I had a devil of a time chasing one down to photograph! Just as I got close enough, they would fly off - every one of them! The wind had really picked up at this point, and many of these butterflies were being blown backwards. And when they landed, their wings listed to the side, like a sailboat heeled over in a strong wind. Update: I stand corrected. I was reading up on sulfurs at BugGuide.net and began to doubt my ID of this butterfly. If you look closely at the large spot on the hindwing, you will see it has a little satellite spote. This double spot is pretty conclusive that it is NOT a pink-edged sulfur. It might be an Orange Sulfur (C. eurytheme), although it could possibly be a Clouded Sulfur (C. philodice). Apparently, just to make things a bit more complicated, the two are known to interbreed. This is why I prefer flower ID - for the most part it is a whole lot easier.
Anyway, I guess the thing to look for to tell the difference between Clouded and Orange is the width of the dark band on the edge of the wings. This band is black, and it stands out like a sore thumb on the top of the wings. However, it is strong enough in color that its shadow can be seen on the underside. If you look carefully, you can see that the edge is a bit darker, and this dark area does not extend past the row of light spots. On Orange Sulfurs, this band is quite broad, and on Clouded Sulfurs it is more narrow. Based on the photos in Butterflies Through Binoculars, and my photo here, I am now leaning towards this specimen being a Clouded Sulfur. Feel free to chime in if you have a better idea. 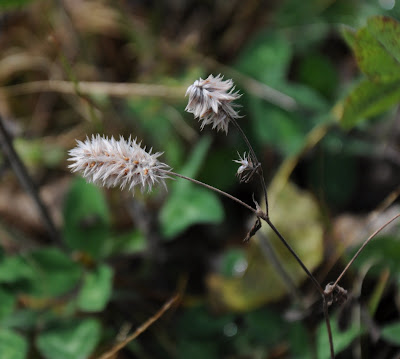 There were several patches of this fuzzy-flowered plant in the sandy "waste" near the parking area at the beach. It looks like the fur on a soggy cat because it had been raining off and on. Evelyn thought this was some non-native plant that has "bunny" in its common name. Any ideas? Update: Betsy correctly identified this as Rabbit-foot Clover (Trifolium arvense), which likes to grow in dry sandy, gravelly locations, which this certainly is. 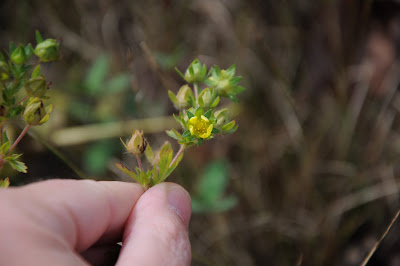 I didn't have my Newcomb's out at this point (I was trying to chase down the butterflies), so I didn't key out this flower. I thought it was a cinquefoil, but looking through Newcomb's now I'm beginning to thing that maybe it is Yellow Avens (Geum aleppicum).