Monday I met with my friend Jackie for a beautiful day in the country. It was a gorgeous day, a true Indian Summer day, and we headed for the Saratoga Apple Orchard over near Schuylerville, in the foothills of the Adirondacks. 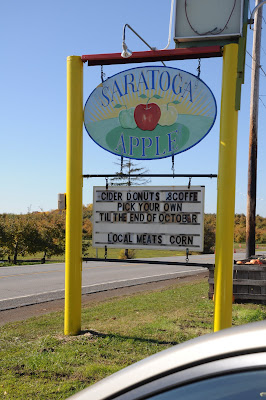 I wanted to stop here for apples because I knew they had Northern Spies, they don't spray any more than they must, and they even grow a few apples organically. Well, I loaded up a bag with Spies, then another with Ida Reds. A few Crispins and Honeycrisps filled out my purchase, as did some local tomatoes (Mmm). Jackie treated us to an apple cider donut and a cup of cider each. I am not a huge cider fan, but this was THE BEST cider I have ever had!!! I wonder if that's because they don't use fallen and damaged apples when they make it? Whatever the reason, it was very very yummy. And the donut was crisp on the outside, fluffy on the inside, and not greasy at all! Gastronomically, I'd say this was the best cider and donut I've had in my life.

After we supped (dodging hungry yellowjackets the entire time), we drove to the canal down in Schuylerville to walk along the towpath. 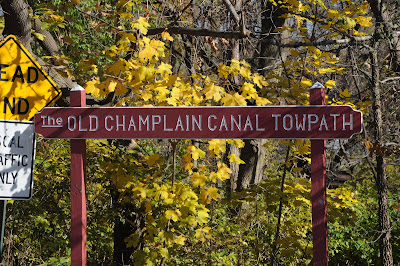 This canal, built around 1905, runs right along the Hudson River. We wondered why they put a canal here when there was a perfectly good river right next to it. We encountered plenty of interpretive signs, but none answered this question. There must've been some characteristic of the river that made a slow-moving, mule-powered canal a better option for moving boats, but they weren't tellin' us. 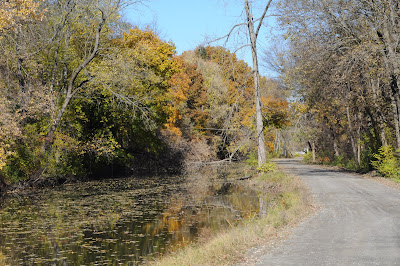 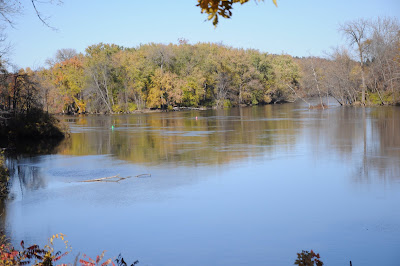 The temps soared into the 60s, the trees were near peak in color. Cedar waxwings flitted through the tree branches, and we peered at plants and insects along the way. 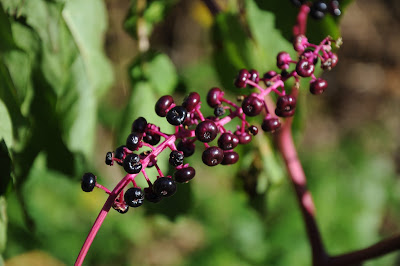 Pokeweed (Phytolaca americana) was a surprise for me. I've always considered it a Southern plant, as in Virginia and Georgia. But here it was just south of the (Adirondack) border. The berries are simply one of the richest colors in the plant world palette. 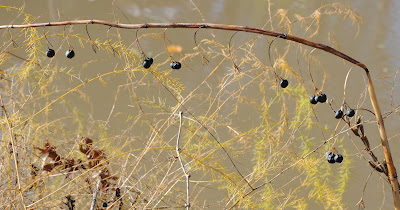 And who knew that asparagus (Asparagus officinalis) grew berries when it goes to seed? My folks grew asparagus, and often it grew tall, leggy and ferny, but I never never never saw any berries on it. You learn something new every day. 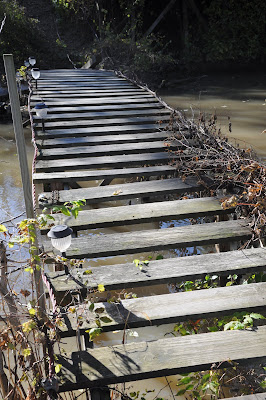 One family living along the canal built this nice little bridge over it so they could cross easily to the towpath and the river. Another family had a little raft to ferry across by pulling the raft along a rope strung from one side to the other. 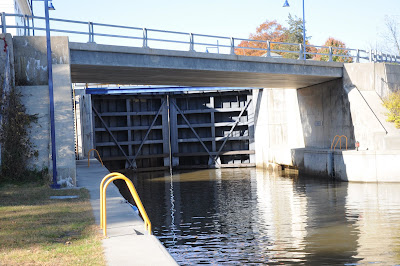 We came out at the lock, I think it was/is Lock #5, on our right. This was odd because the canal we were following was on our left. 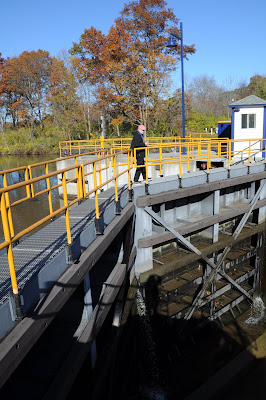 We scrambled up the bank and crossed the road. A footbridge crosses the top of the lock (when the doors are closed). I was a little nervous crossing it - being able to see the water down below through the treads was a bit disconcerting. We didn't get to see any boats go through, but one had used the lock about fifteen minutes before we got there. 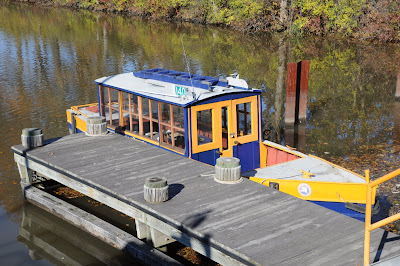 An official NYS boat was docked at the lock (locked at the dock?). It might be the lock-keeper's boat. It looks like something from many decades ago, doesn't it? There was also a small paddlewheel boat docked just upstream from the lock. Apparently they use it for canal tours. 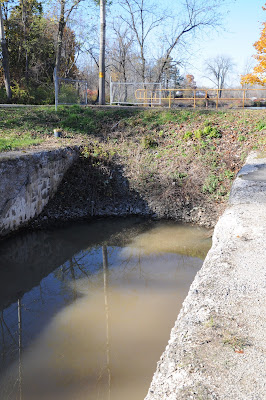 The original channel of the canal that we'd been following (on our left) suddenly ended here. Literally. A dead end. It was very puzzling. The canal where the boats were docked ran next to this bit (to our right). What happened to cause the schism? 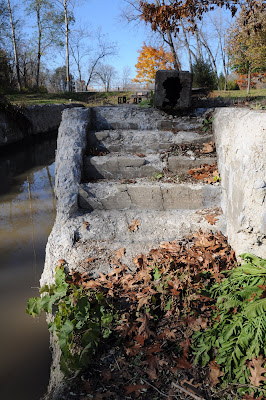 I liked these old (and crumbling) stairs that were next to the end of the canal. I wonder when they were built. Certainly not in the 17- or 1800s, but they had an ancient sort of look about them.

Because the towpath was gone here, we now followed a road that led from the lock towards the river, coming out along the way at a lovely little park. 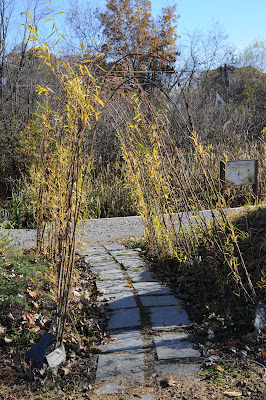 An arbor of willows leads you to a good-sized stone labyrinth, which is flanked by the bow of a boat, 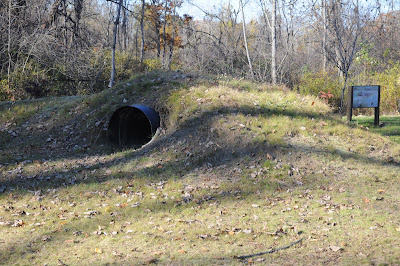 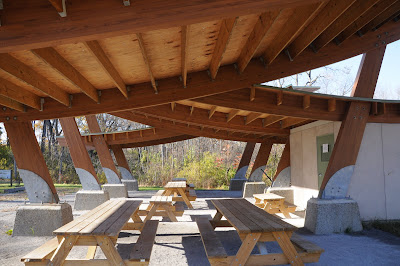 a path with some lovely tiled stepping stones, and some interesting architecture.
This park was recently reclaimed from what apparently had been a dumping grounds for local people. Those who made the park have done a lovely job with it and should be commended in their efforts. 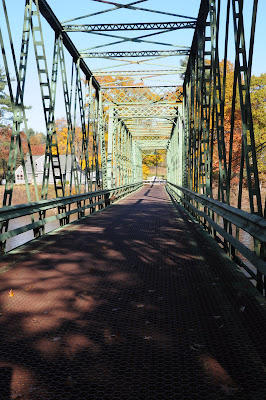 Our goal was this bridge, which crosses the Hudson River. 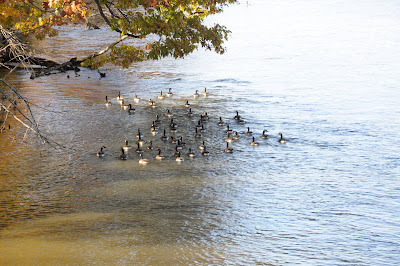 Plenty of Canada geese were taking their rest on the river upstream. 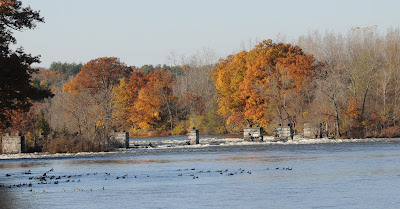 And there, maybe a quarter mile further upstream, was the possible reason for the canal: rapids. 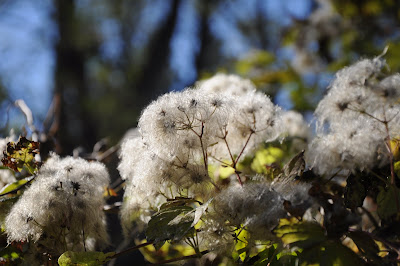 It was now after 3:00 and I needed to be headed back north. We followed a footpath back towards the lock, passing some lovely virgin's bower (Clematis virginiana) along the way. This is one of my all-time favorite plants. It was the first plant I learned as a naturalist intern right out of college, although at that time I was taught it was called Old Man's Beard.
All in all, it was a perfect day. Thank you, Jackie, for another great tour around your neck of the woods!
Posted by Ellen Rathbone at 3:36 PM