Would you believe we hit 80*F yesterday! In the Central Adirondacks! In Early April! Unheard of. Must be a new record.

The plants and insects are enjoying it, though. Mr. Mike reported coltsfoot in bloom at his barn, and he also saw "an orange butterfly with black spots." One of the punctuation butterflies? A Compton's tortoiseshell? I don't know.

Back at my house, though, I discovered the following signs of life: 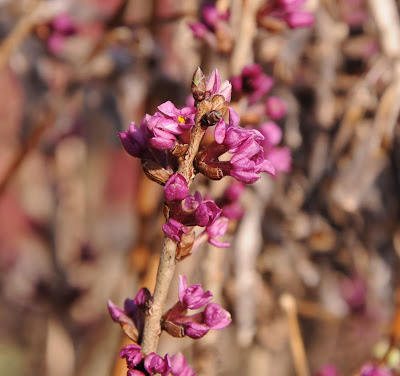 The giant pussy willow had three or four catkins "open"
(pollen now available), and they were drawing in the bees. 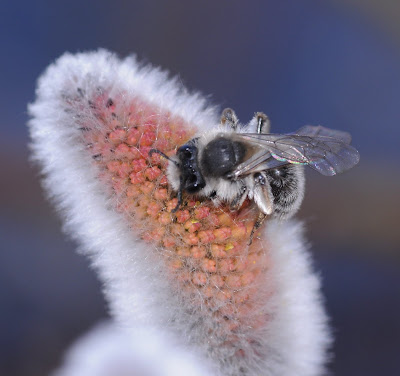 This was the giant among the hungry feeders. I think it is a type of mining bee, but I'm waiting for confirmation from BugGuide. Update: The experts say this is Adrena frigida, one of the mining bees. There are about 1200 of these solitary bees in North America. They burrow in the soil. I watched a nesting aggregation of these bees last spring, but never got any photos of them. Maybe this year. 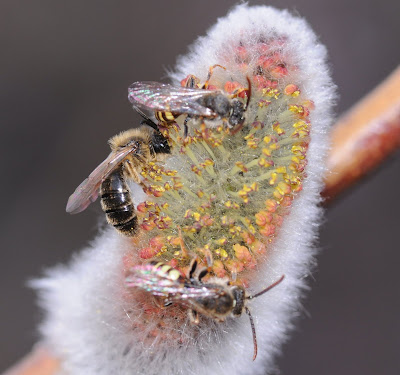 This trio were all quite focused on the pollen and ignoring each other
as well as me. Update: the big one in the middle is another species of Adrena, but the Bugnet folks couldn't give me more than that. How different it looks from the fuzzy Adrena in the previous photo. The other two are the same species as the one in the next photo. 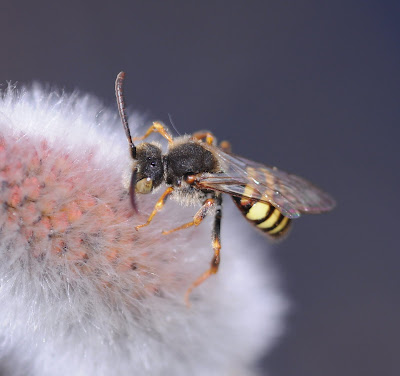 Here's one of the trio (and there were a lot of these - probably the dominant bee at this shrub). I think it is a species of sweat bee, but again, I'm waiting to hear from BugGuide. Update: and the experts say this is a male Nomada bella. Nomada are cleptoparasites of digger bees, specifically those in the families Andrenidae and Halictidae. Their larvae, which are laid in the bees' burrows, eat the pollen and nectar that have been put aside for the digger bees' offspring. Sometimes they kill the host larvae, too. As adults, Nomada look a lot like wasps. 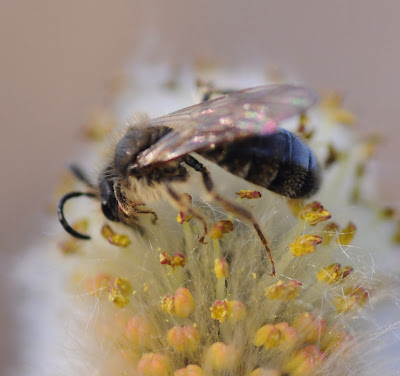 The second species of the trio. I have no idea what kind it is...BugGuide is on standby. Update: Adrena sp., as noted two photos up. 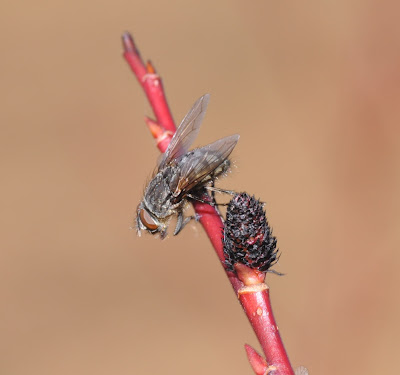 Meanwhile, over at the black pussy willow, the only visitors to its catkins were flies. Hm...I wonder what that means? 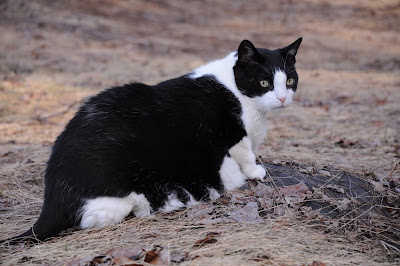 Idefix was enjoying his time outside.
This is one of the few photographs I've taken of him
where he doesn't look pissed off at the world! 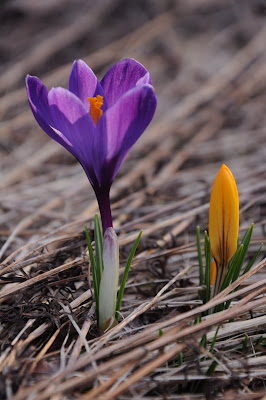 And there, in the "field" (the unmowed portion of my yard),
two crocuses (crocii?) had raised their cheery heads.

And then, to top it all off, last night, as Toby and I were walking the golf course, I heard them: the first frogs. First, it was a lone peeper, who, after two peeps clammed up. But then we came around a bend in the trail and in front of us a pocket wetland was full of woodfrog songs! As we approached, a chorus of coyotes started calling from the woods. Toby, of course, had to respond, which promptly made the woodfrogs close their mouths and submerge.

I perched on a rock and tried "quacking" to entice the frogs back, but after several minutes nothing happened. The rock was becoming uncomfortable, and Toby was eager to move on, so we left the frogs to themselves. Maybe I'll try again tonight.
And then, the cap it all off, we heard the first peents of the woodcocks, followed by their twittering flights.

Note: the spring peepers are about 20 days earlier than usual, and the wood frogs 10-20 days earlier.
Posted by Ellen Rathbone at 9:54 AM