What a GLORIOUS day today is turning out to be! When I got up, the fog was settling in nicely. I had to drive out to North Hudson to meet my Bluebird Society County Coordinator to pick up bluebird nestboxes for this weekend's workshop (Saturday, 3 April, 1:00 PM - come on out), so I took my camera with me, just to make sure no moose stepped out of the fog and into the Jeep. It worked - no moose.

But moose aren't everything. Today's star turned out to be waterfalls.

First, I was treated to these these splendid twin waterfalls that were tumbling merrily down the rock outcroppings. I was driving eastward on the Blue Ridge Road, and they were to my left, just beyond the bison farm. 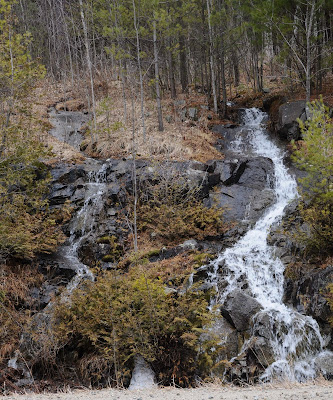 After picking up my nestboxes, I knew I had to stop and check out Schroon Falls as I headed back to the office.

If one is headed westward on the Blue Ridge Road, and if one is looking to one's left just as one drives past the Blue Ridge Campground, one will see a pull-off next to the guardrail, and way down below one will see Schroon Falls. (It's harder to see it if you are driving eastward.) 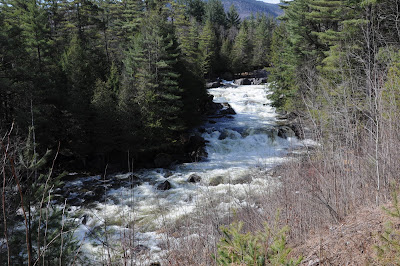 With the winter run-off and spring rains, the water is flowing very nicely right now. 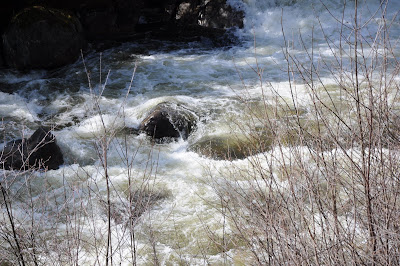 And while it was oh-so-beautiful to look it, it was tough as the dickens to photograph. The sunlight was just too bright, so if I exposed for the brilliant water, everything else was black as pitch. If I exposed for the trees and rocks, the water was a glare of white. The Happy Medium was not putting in an appearance at the Falls today. 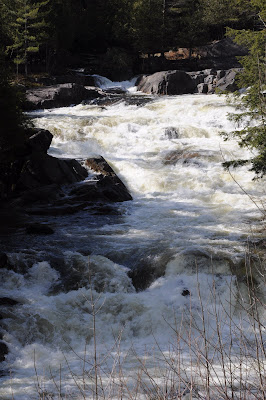 There's a footpath that runs upstream from the "parking area," which I've never taken before. Since it was such a beautiful day, and I had the camera with me, I decided to see how close I could get to the falls without killing myself. 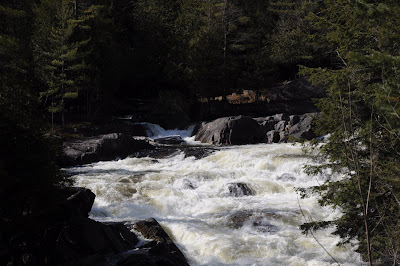 The answer is right down to the water's edge! 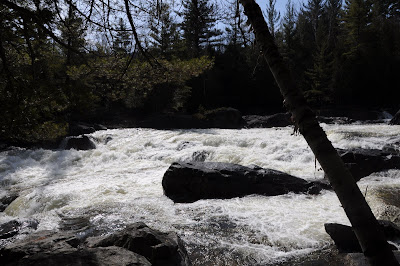 There are lots of water-worn boulders along the edge that were high and dry today, so I could get pretty darn close. In fact, I could've dipped my toes in the rushing water if I'd had a mind to. I didn't...I'm smarter than that. 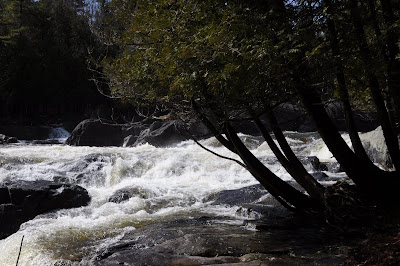 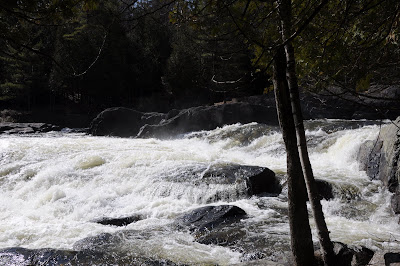 I really wanted to catch some of the sprays as the water pounded downstream and slammed into the rocks. Mostly I was unsuccessful, but even so, one can still feel the power of the river. 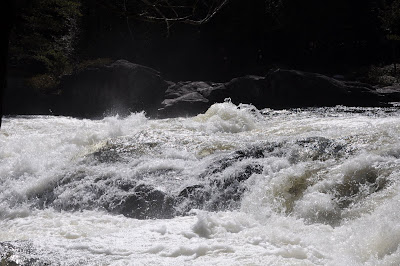 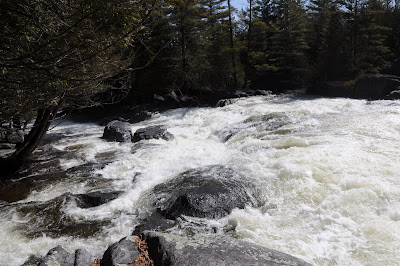 Something about the sunlight, the water, and probably the geology, made this one swell of water an amazing bottle green. 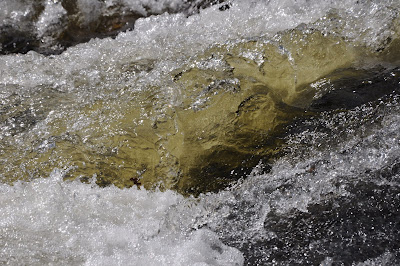 I took about 900 shots of this rock with the water splashing up against it, trying to get ONE that captured the action and feel of it. 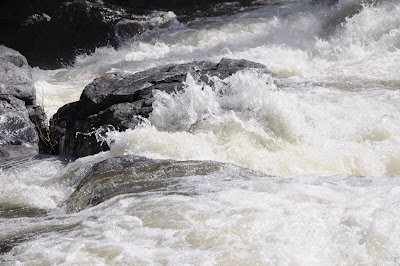 I think the monochrome shows the drama best. 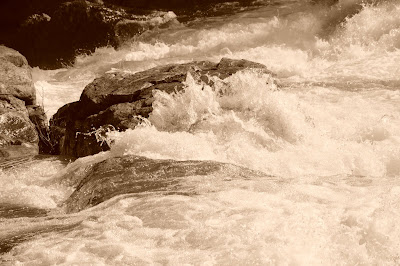 Lots of summer folks stop by the VIC and ask for directions to waterfalls. If the summer is dry, even our most spectacular waterfalls can be rather non-descript. But if you come in the spring, you can almost be guaranteed a good show at Schroon Falls, and also at Buttermilk Falls over in Long Lake. These are the two waterfalls closest to Newcomb that are easily accessed by vehicle, and well-worth the show.
Posted by Ellen Rathbone at 12:49 PM

Email ThisBlogThis!Share to TwitterShare to FacebookShare to Pinterest
Labels: waterfalls