A Grand Day Out

Can't say Sunday dawned sunny and bright, because it didn't.  And it didn't turn that way at any time during the day.  In fact, it went from partly cloudy to all cloudy to simply grey and overcast to rain.

Still, that didn't keep us inside.  Nope.  We had planned to pre-trip GREAT's paddle on June 9, from Vandercook Lake to Ella Sharp Park - paddling the Grand River, and so we did.  This stretch of the Grand empties into Vandercook Lake, which is surrounded by houses (I rented The Hovel here when I first moved to MI) 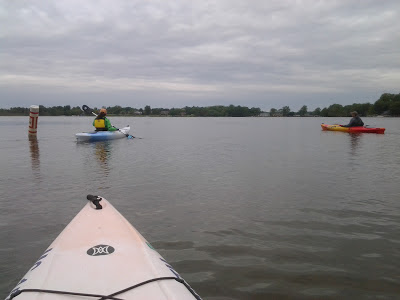 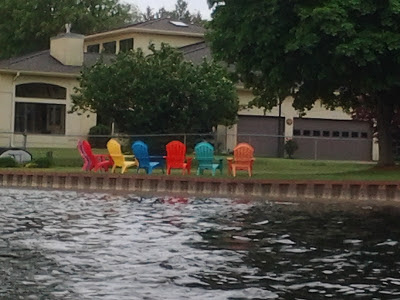 and then passes under the causeway that is Brown's Lake Road, taking us into Brown's Lake (equally populated by houses - many of which are McMansions). 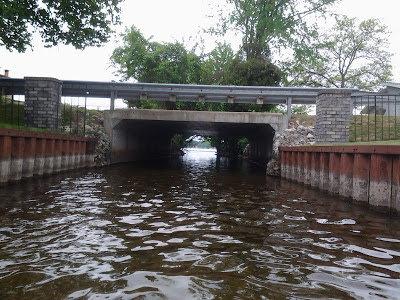 At the far end of Brown's Lake, the river turns northward and becomes more of what one expects of a river: 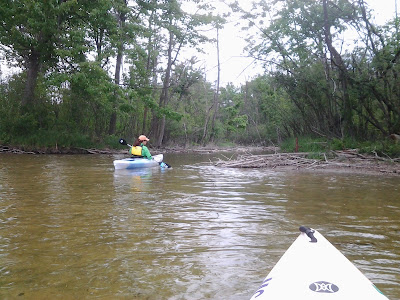 Eventually we found ourselves on a lovely pond (they call it Williams Lake), which only had one or two houses on it.  Ahhhh.  It was so lovely.  And no, it wasn't quite twilight.  By this time it was between 8:30 and 9:00 AM.  Yes, it was overcast and grey, but my phone, which was the source of all these photos, does not do well with lighting, so we have either washed out or dramatically dark images.

The spatterdock was juuuust starting to bloom, and was about the only spot of color we saw this morning (those chairs above being the exception). 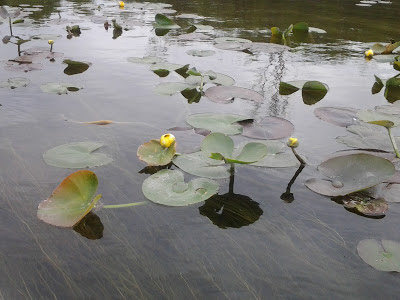 We wound down stream, through wetlands, under bridges, and past many a well-kept lawn as the river passed through neighborhoods and "wild" lands alike.  (Well, as wild as one might expect in the city of Jackson.) 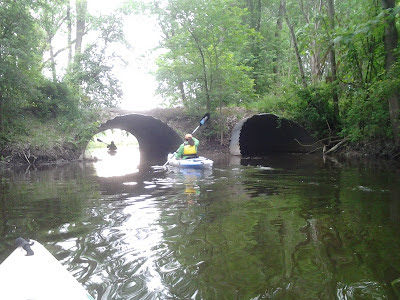 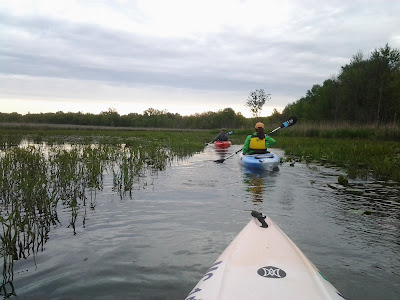 We encountered many (and I do mean many) areas where we had to scramble out of the boats to get around or over dams or blowdowns.  We learned how to stand in the boats while we climbed onto fallen tree trunks, having a seat while our boats were dragged underneath or over the tops of the trunks.  In a couple places we had to go through the mud.  As you can see, it is very rich mud.  The perspective of cell phone cameras leaves a lot to be desired - my feet are not really that tiny on the ends of gigantic legs. 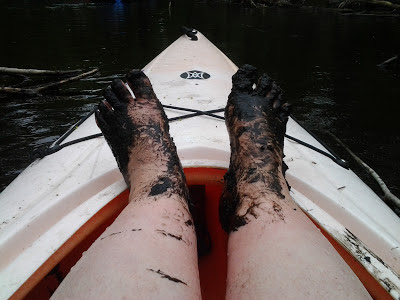 And then, when I was downloading the photos from the camera to the computer, I thought I had transferred them all and deleted them (permanently) from the phone, only to discover as I was uploading to the blog that about half of them never made the transfer.  >sigh<

Still, I have the potential to redeem my photography in a couple weeks when we plan to paddle this again, when we'll potentially have another 80 people in tow, provided GREAT's crack river-clearing team gets through there first and clears out the many blowdowns.  Then all we will have to contend with is low water (thank goodness I was borrowing one of Quite World Sports' kayaks this day...and it's now been raining for two days), and 3 or so dams, one of which we can shoot over if there's enough water.

As the crow flies, the put in and take out are about a mile or so apart, but the paddle took us over three hours, thanks to all the scrambling we had to do, but also to all the bends in the river.  It is a very lovely stretch and I highly recommend it (water levels and blowdowns providing, of course).

And many many thanks to Kat from QWS who a) not only provided the boats, but also jumped into the water at every obstacle and, along with fellow GREAT member and QWS staffer, Rick, b) helped us hoist ourselves and our boats through each blockage along the way.

Shameless Advertising:  If you want to paddle at Vandercook Lake and check out this stretch of the Grand River, stop at Quite World Sports, right there at Vandercook Lake Park, where you can rent a kayak or paddle board and go exploring.  It's a great deal ($15 for 2 (or was it 4) hours or $25 for the whole day).  Kat and her staff also teach folks all sorts of paddling techniques and you can sign up for a variety of classes.  A great place for beginners to start!
Posted by Ellen Rathbone at 5:22 PM