What a Difference a Week Makes!

Last Tuesday, I made a promise to one of our volunteers at work to take her out to NanWeston Preserve this last weekend to see the wildflowers.  It was the least I could do for someone who gave up a guided tour with one of our naturalists to help me out with a school program.  I suspected there would be one or two new things blooming since the previous weekend, but I wasn't prepared for quite the change I saw!

When we first reached the entrance, where last week bloodroot was a common as dandelions in my yard, there wasn't a single bloodroot flower to be seen!  The spring beauty was still hanging in there, though, 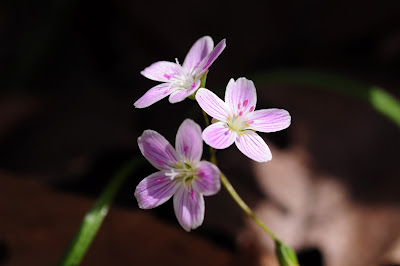 as were the rue anemone. 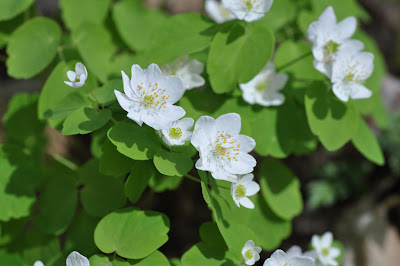 Many more violets had poked up their cheery heads.  My friend Jackie, who knows violets like the back of her hand, would easily identify all the ones we saw.  All I could do was take a stab at it.  I believe this one is downy yellow violet. 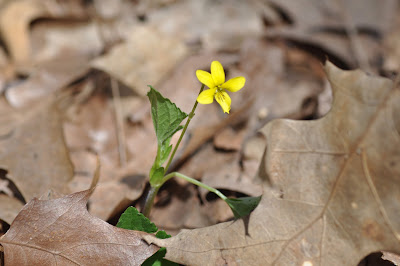 And this one most likely is the common blue violet. 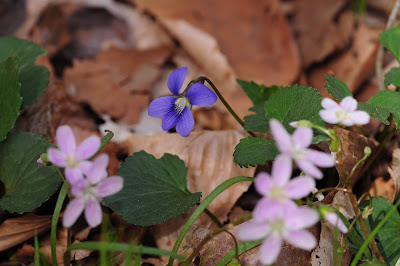 A week ago the mayapple was juuuuust poking up out of the duff, each umbrella-like leaf still closed down.  Today they were all wide open, although the flower buds were still tightly closed.  With the warm weather we are having again this week, however, I don't imagine it will take too much longer for them to be in bloom. The spicebush peaked, and now their leaves were starting to open.  A yellow haze still remained in the understory, but it was nowhere near as pronounced as it was last weekend. 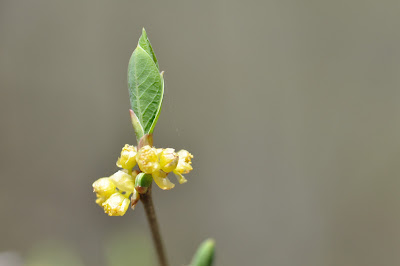 And all the leatherwood flowers had also been traded in for new green leaves. 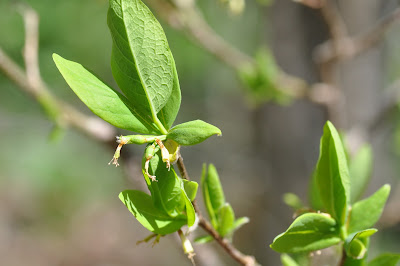 I found one blue cohosh that still sported purplish flowers, 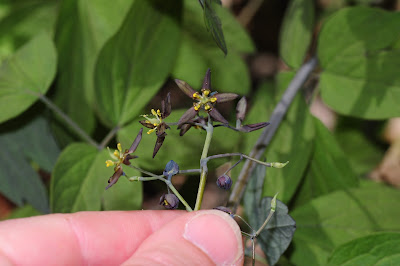 but most were greenish yellow by now. Update:  It appears that botanists have now determined that these are actually two separate species of blue cohosh.  The purple one above is listed as Caudophyllum giganteum, and the yellow one below is C. thalictroides (whereas my Newcomb's lists just the latter species name and refers to it having either purple or yellow flowers).  Seems like birders are not the only ones to fall into the categories of lumpers or splitters when it comes to determining species!  Thanks, Jackie! 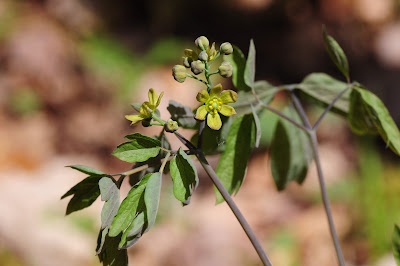 As we crossed the long boardwalk, we noticed just this one grass in bloom, and its flowerhead was simply writhing with insects! 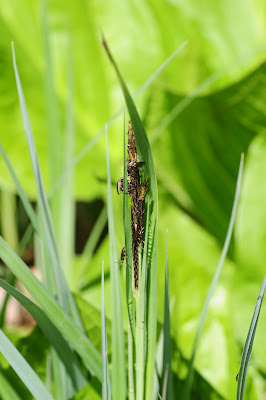 One lone beetle was out on a leaf.  It reminded me of a tiger beetle, but I suspected that wasn't it.  I sent the photo off to BugGuide.net, and in less than three minutes I had an ID:  Donacia, a genus of long-horned leaf beetles.  There are about 29 species of these in northeastern North America.  What a handsome fellow it is. 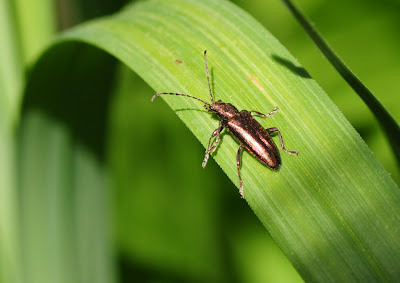 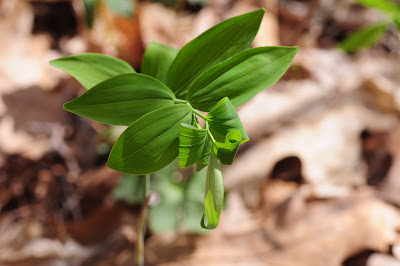 Moving on, we found large-flowered bellwort just starting to open. These were barely leaves a week ago. 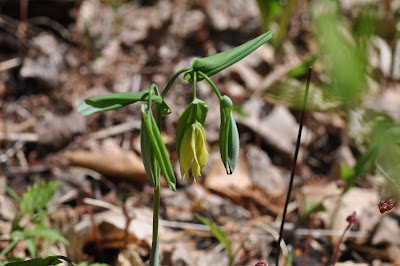 As predicted, the dwarf ginseng was blooming nicely by now. 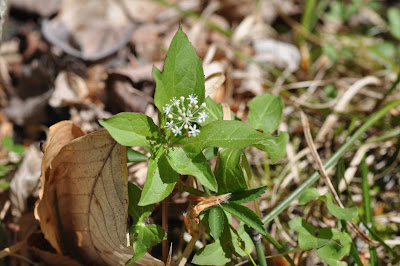 Sadly, the Dutchman's breeches had peaked and gone, but we did find some squirrel corn now in bloom. 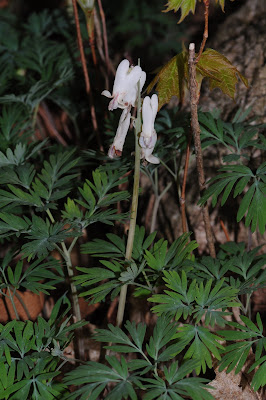 And whereas last week cut-leaved toothwort was all over the place, this day we only found regular old ordinary toothwort, the leaves of which reminded me of strawberry leaves. 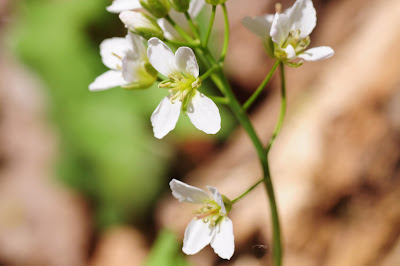 We hit the trillium bloom right on the money, though.  All throughout the woods were vast patches, carpets of these lovely white flowers.  Ahhhh. 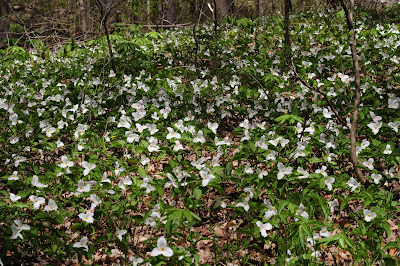 The wild blue phlox was just starting to appear.  We found maybe a dozen plants this afternoon. 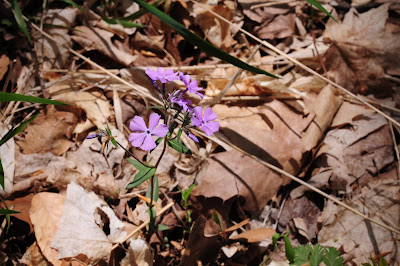 And one of my favorites, miterwort, was also just starting to open.  The delicate white flowers look like snowflakes if you see them up close.  Go ahead and zoom in on the photo if you can. 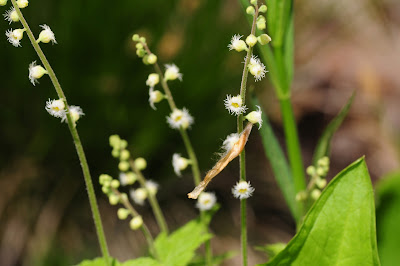 We also saw our first oriole of the year this afternoon, and, as if it was a sign of good things to come, a small red fox trotted across the road in front of my car as we drove out to the preserve.  It was a good omen.

Having seen so much change in just one week, I am sorely tempted to go back again this weekend!  I will be in Kalamazoo on Sunday at a native plant nursery (Hidden Savanna), looking to add some rare treasures to my property at home, namely milkweeds.  Rare milkweeds?  Have I got the right word there?  Indeed.  Michigan used to be home to several species of milkweed, some of which are so rare they are hardly ever found any more.  I am going to do my bit to try and reestablish them in my field.  So stay tuned...
Posted by Ellen Rathbone at 6:40 PM