About 80 of my closest friends and I hit the water on Sunday.  It was GREAT's first paddle of the season (the actual first one being cancelled not once, but twice, due to high water). GREAT is the Grand River Environmental Action Team, and as of last month I am a board member of this group of paddling enthusiasts. 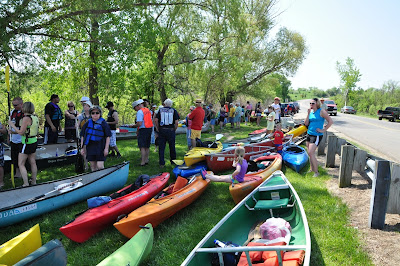 Once a month, from April until October (ish) they host paddling trips on area waterways, often the Grand River, to encourage people to get out and know their local rivers, lakes, ponds and streams.  With familiarity comes a sense of caring...and then we can get people to help clean these waterways and protect them.

Sunday's trip was from the Goose Creek Grasslands, a Michigan Nature Association nature preserve over near Cement City, to Columbia Lake (or is it Lake Columbia?).  It was a short paddle, and a good way to start the season.  The morning was sunny and soon it was well into the 80s.  Before the evening began to cool things down, we had soared into the 90s.  Bleh.  But on the water it was pleasant, thanks to a pretty constant breeze.

When one goes on a GREAT trip, one first must sign in.  Many participants are boatless, and GREAT has many canoes and kayaks that it loans out...free of charge!  With each boat one also gets paddles  and PFDs - safety first. 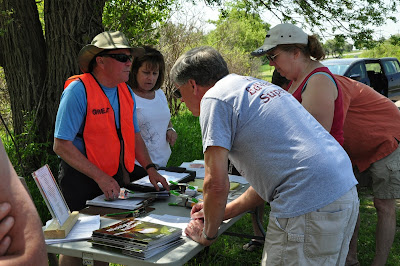 Sometimes pooches come paddling, too.  This is Jozy - she remained a land lubber this day, although she had her share of time swimming in the cool waters. 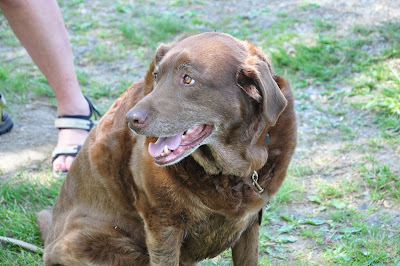 Our trip this day started off with a talk from MNA's executive director, Garret Johnson, who told us a bit about the Goose Creek Grasslands.  These 70-some acres are a nifty habitat called a Prairie Fen, which is rather rare these days, since many of their original locations have been drained over the years for agriculture and development.  With rare habitats come rare plants and wildlife.  And while there is no formal trail here (yet), there are t-posts that mark where a trail will eventually go, which will help those who want to come out and see some of the beauties that call this place home.  I heard the word "orchids" mentioned, so I will definitely be back here in June/July to see what orchids are here! 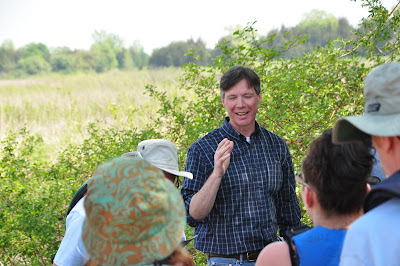 Then one-by-one, boats went into the water and paddlers were launched. 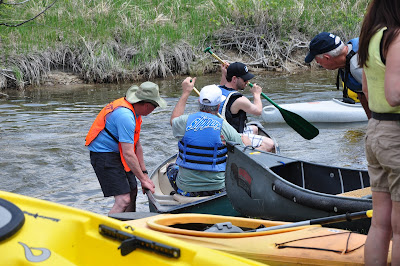 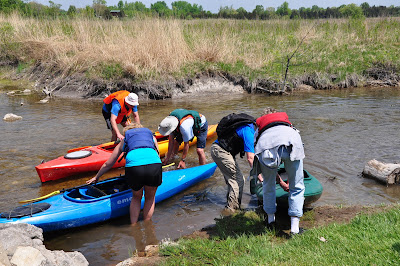 Sometimes it took 'em a few moments to figure out which way to go. 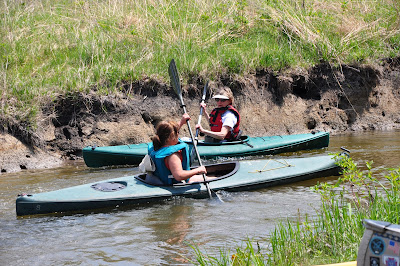 I was in the role of sweep boat, so I was bringing up the rear.  This is my favored position on these paddles - I can take my time to do some photography, and I get to help out anyone who is truly having a difficult time paddling and is falling behind.  Luckily today no one fell into that category!

I'm not sure what made these holes in the bank.  I'd suggest bank swallows or something along those lines, but these were all under water a few weeks ago.  A rodent, perhaps? 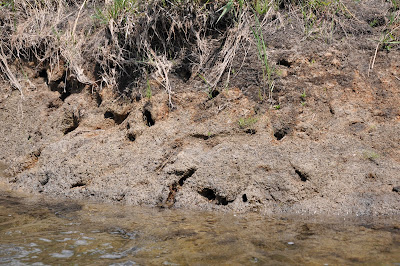 And here is the view from the water.  The majority of the paddle was along a very windy creek, with prairie fen to the sides.  In many places the water was quite shallow (despite the rains of April). 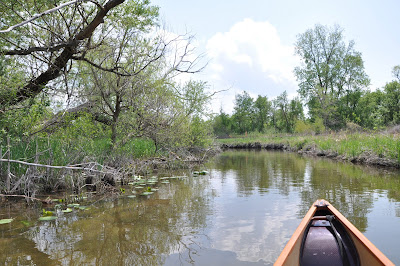 Lots of red-winged blackbirds were nesting along the edges.  Males and females both expressed their displeasure at our disturbance. 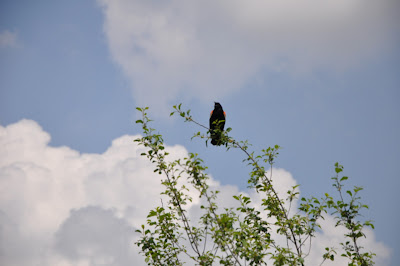 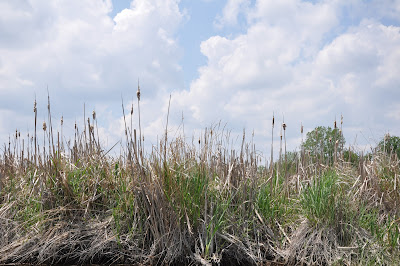 The emergents showed their muddy tops, which were well below the water even a couple weeks ago. 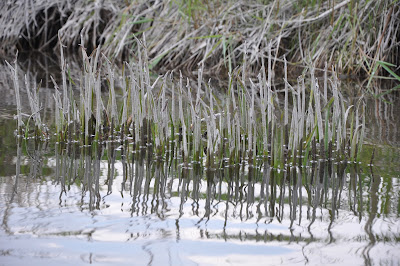 You just never know what you'll find along the water's edge. 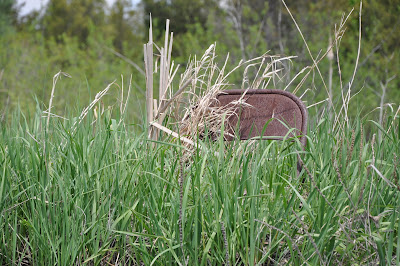 We are still in the season of woodland flowers, so grassland species are not yet ready to bloom.  Still, some of the trees and shrubs had some things for us to see, like these willow catkins going to seed. 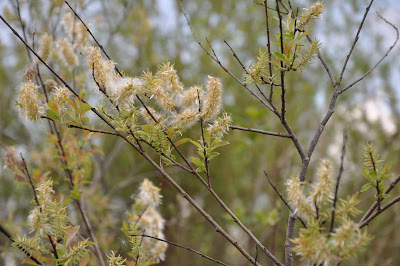 Private property borders the creek along both sides.  It was kind of fun to see some of the structures folks have built so they can come down and enjoy the water's edge. 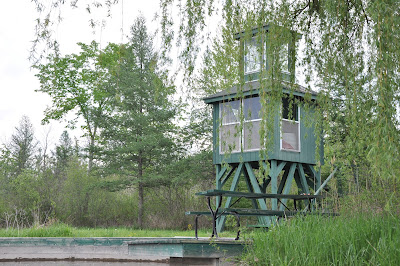 Eastern kingbirds were busily catching insects.  This one perched and gave us a good long chance to snap its portrait. 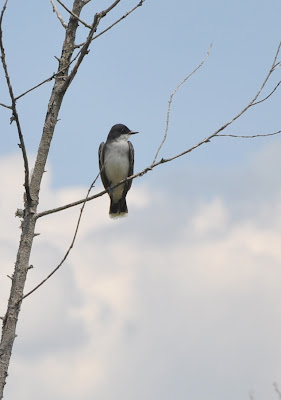 Spatterdock buds were tightly closed.  And we only saw a handful of dragonflies and one damselfly. 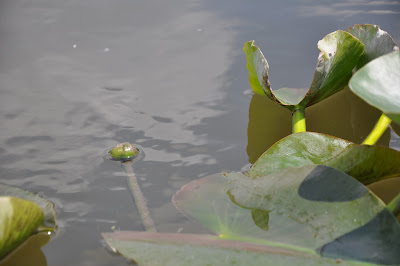 These three black labs were certainly enjoying the creek - they were all drippy and eager to greet us, the last of the paddlers. 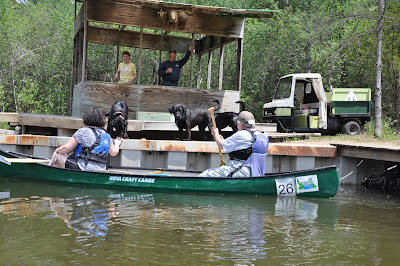 Eventually we came to some more wooded areas.  Erosion was quite evident. 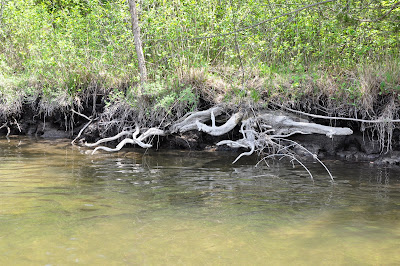 Our Rivermaster, Kat Kulchinski, waited to guide our boats under this old trestle bridge.  There were some potential hazards and she wanted to be sure everyone hugged the left side to avoid getting hung up on old pilings. 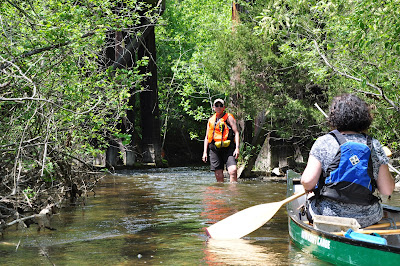 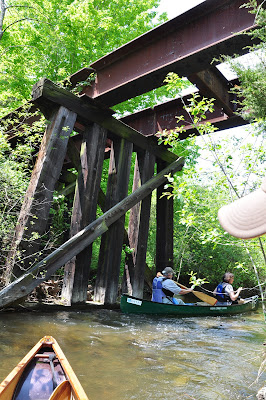 Some old bones rested next to an old cinder block. 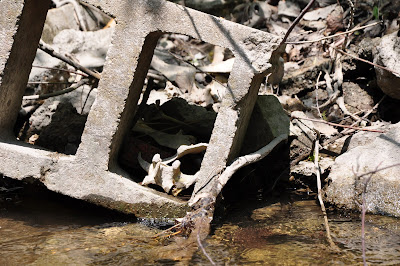 Like I said...you just never know what you will find along the water's edge. 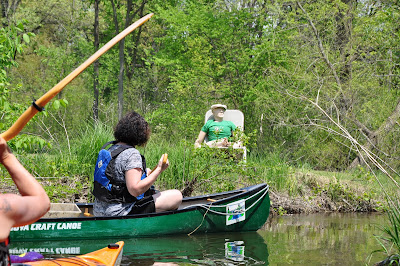 All too soon we were back in "civilized" territory. 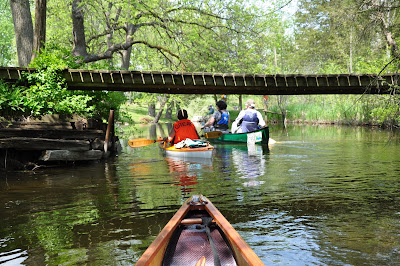 A low stone dam was the only real obstacle we had to avoid.  Some folks chose to go over... 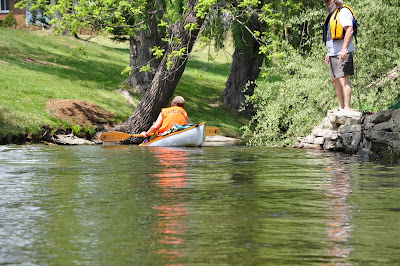 but seeing the rocks from the other side, and knowing how Kat had to rock her boat to get over them, I'm glad I opted to carry my Spitfire around! 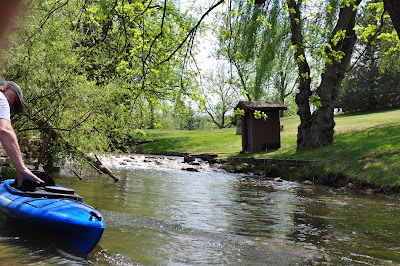 And within moments we were entering Columbia Lake. 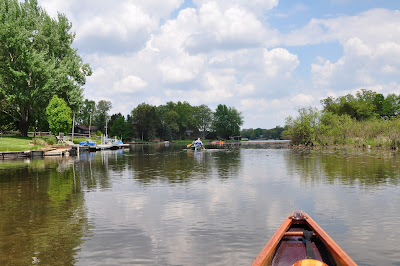 Like many a lake in this country, it is surrounded by homes, cheek by jowl, many of which are McMansions.  Give me a wilderness lake any day. 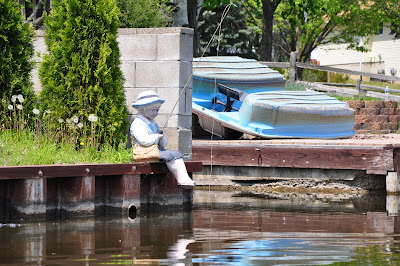 We had the generous permission of the Lake Columbia Association (?) to use this boat launch to take out.  The rest of the time it is for private use only. 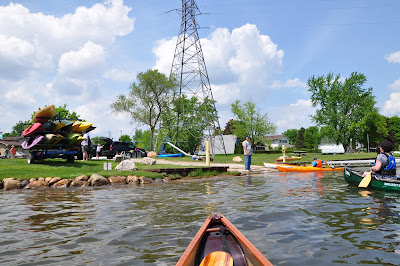 And so our paddle came to an end.  We were on the water maybe a couple hours, so it wasn't too trying for a first time out.  I've left my boat on the car since next Monday the goils from GREAT are doing a pre-trip paddle along next month's route.  But, I may take it down...cloudy, stormy weather is in the forecast this week and having it up there really does nothing for my car's mileage!  :)
Posted by Ellen Rathbone at 4:47 PM