When the pine siskins are mobbing the feeders, they do a wonderful display with their wings and tails, fanning them out and flashing their hidden colors, which are really quite beautiful.


So this morning I thought I would attempt to capture it "on film." Well, wouldn't you know that the birds decided to be civil today! I finally ended up with two shots, however, that do show the colors. 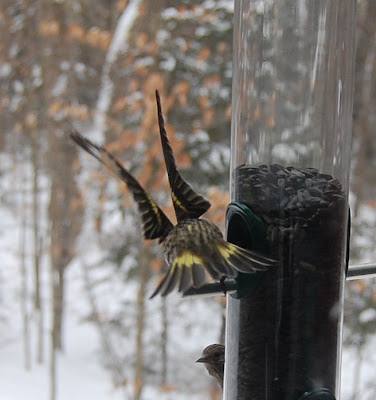 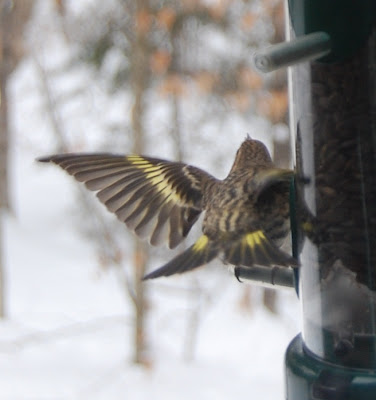 As I sat there perched on my desk, waiting for the perfect shot, I marvelled once again at how the siskins sit and gorge at the feeders. And they were throwing an awful lot of seed on the ground. Now, I'm willing to believe that there are plenty of dud seeds in a bag, but it seems they were tossing out twenty for every one they ate, which seemed a bit excessive. And then suddenly, all the birds were gone. I had noticed the occasional chickadee flying up from the ground under the feeder, so I craned my neck to look directly down from my window, and there were the siskins, and chickadees, feeding on all the seeds on the ground. Could it be that the siskins, whom I had previously categorized as greedy pigs, were being altruistic and casting seed upon the ground so others could eat as well? HM. Every story has more than one side.
Posted by Ellen Rathbone at 11:29 AM