You never know what you will encounter when you go out the door and into the "wild." You might stumble across unusual tracks, or hear the song of a woodland bird that is new to your ears. Maybe a new flower is in bloom, or a large hatch of mayflies occured. Perhaps the new light of dawn is bathing the world in gold, or a full moon appears like a search light across a snowy expanse. The possibilities are endless and it's all free for the taking!

Well, here is a recent strange encounter: bizarre growths on the side of a birch tree. Actually, strange growths on two birch trees. It's been a while since my "Forest and Shade Tree Pathology" course, and since I wanted to be sure I identified the causative agents correctly, I sent photos and an enquiry off to Professor John Castello, the current pathology professor at SUNY ESF. Here are our findings:

This is the first one I came across. The black growths seem to erupt from the bark of the birch like some alien bursting forth (which, in a sense, I suppose it is). 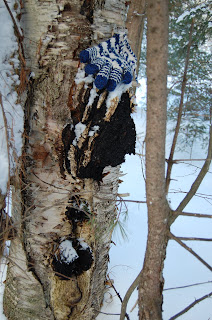 Part of what grabbed my attention was the shear size of the thing - I placed my glove on the upper-most growth to act as a reference for size. Maybe it's a burl in the making. Hm. 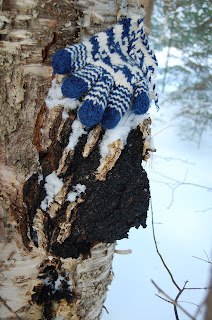 I had an email from Professor Castello this morning identifying this as the "sterile conk of Inontus obliquus." So I zipped on-line for information on this fungus. Apparently it is very common on birch species, although it has also been found on alder, hickory, beech and hophornbeam.

The black "stuff" that is erupting from the trunk is fungal tissue "erupting from bark cankers" (this from http://www.pfc.cfs.nrcan.gc.ca/, a forest disease website from Canada. The tree's trunk is often thickened at the site of the disease, where the tree reacts like a body with cancer: rapid reproduction of wood and bark. There are fertile fruiting bodies, but these are annuals (where as the black bit is perennial) and are difficult to find due to rapid deterioration from insects and weather damage.

The bottom line is that this fungus causes a very severe white heart and trunk rot - not good news for those in the timber business.

One website(http://www.wholelife.com/) I found claimed that Inontus obliquua has medicinal properties. According to the article, written by Kahlee Keane, "This birch fungus known as chaga or "tsyr" has been part of Russia's traditional medicine since the sixteenth century. In recent years its therapeutic qualitites have been validated by such people as Dr. Kirsti Kahlos, a pharmacognycist at the Huinveristy of Helsinki who has been looking at the action of a triterpenes called inotodiol found in chaga. Kahlos and other recsearches have found this constituent active against influenze, inflammation of the stomach and intestines, as well as specific tumors."

So, there you have it.

The second birch tree had an entirely different appearance. It looked as though steps were growing from the trunk all the way up the tree, alternating from left to right. 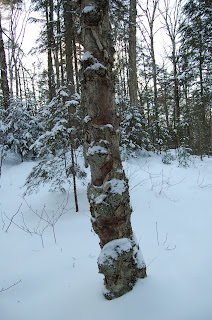 Up close, the bark had been stretched and broken into patterns that immediately brought to mind the growth pattern of turkey tail fungus (Tramedes versicolor). 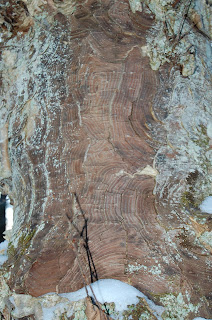 From the step-like swellings along the trunk new twigs seem to be sprouting. 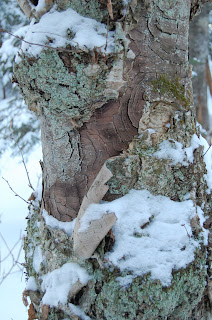 Professor Castello suspects this is the same disease...perhaps the black fungal tissue just hasn't erupted from the trunk yet.