Every summer we are visited by a photographer who shares with us his photographs and his stories. He somes up from "down below" and spends the summer up here camping and snapping photos.

Last summer he watched a red fox for many evenings. One of the things he noticed was that the fox had one leg that was all bloody. Eventually, the fox turned up with the leg missing...possibly chewed it off to stave off infection, or to remove a limb that was no longer useful. Here is one of his photos of the fox: 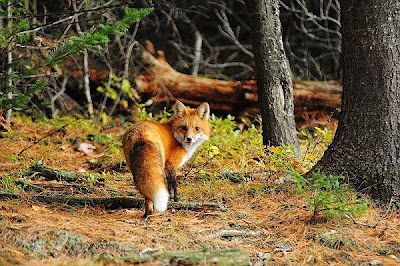 If you really look at it, you will note that the fox's hips are slewed at an angle...just enough to get the one remaining hind leg centered under the body. Many animals that end up with three legs actually do very well. Note how healthy this fox's fur is - moving as a tripod is certainly not slowing it down! Hopefully it made it through this winter as well.

Red foxes (Vulpes vulpes) are rather common up here, although we also have grey foxes (Urocyan cinereoargenteus), which I have only seen out the other end of town. Sometimes the difference can be difficult to ascertain, because the body fur of each species can show great variation. What, then, is the fail-safe clue? The red fox, whether it is red, blonde, or silver-black, always sports a white tip on its tail. The grey fox (which can often look reddish) has a black tip on its tail.

The most interesting fox tails I have found, however, are at the doctor's office. In the hallway, as you walk to the examining rooms, he has a rack (like a coat rack) hung with various animal skins (where else but in the Adirondacks, eh?). The red foxes he has hanging there have rings on their tails! I've never seen the like before or since. Very odd.

Many thanks to George for letting me share his fox photo with you all.
Posted by Ellen Rathbone at 1:40 PM