Friday (yesterday) was a great day to be out! Today should be good, too, but it was -14 when I got to work this morning, so I think I will let it warm up a bit before I take my chances.

Snow conditions, despite the mixed precipitation earlier in the week, are actually quite good (no crunching). I was breaking trail most of the way yesterday, but it was only a few inches, so it was not a trial. For those who are interested in skiing, I am thinking the conditions are pretty good.
Tracks. Yesterday was a great track day - lots of stuff. The down side was that I couldn't figure out what they all were. We had the usual suspects (deer, squirrel and mouse), but then there was this other set of tracks, all over, that I just had the hardest time with. Conditions were not good for toe/foot patterns to show, so I couldn't count toes, and could only just barely make out any heel pad in only a very few tracks. The gait didn't fit any of the "preferred gaits" for our regular animals. The behavior didn't fit any of the animals I tried to make it out to be. So, here are some shots of the mystery tracks and my thoughts on what might have made them.
At first I was thinking large canid, but the stride was too short (stride length at a walk can give you a rough idea of the size of the animal). Also, foxes and coyotes usually travel at a trot and this gives a very characteristic pattern: an almost straight line of evenly spaced holes in the snow. These tracks were doing more of a 2x2 pattern. 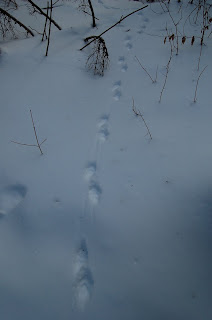 Every time the animal detoured to shurbs or trees or logs, it passed under or through them. Had it been a fox or coyote, one would expect to see yellow snow at these locations. No yellow snow. At this location, the animal appears to have stood up on the side of the little hummock on the left, perhaps to look around and get a better idea of the surroundings. 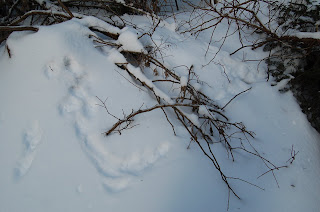 I took lots and lots of photos of the tracks at every location they turned up, and finally got a shot that showed (when I got inside and looked at it on the computer) some foot patterns. The strong crecent-shaped heel pad suggests fisher. 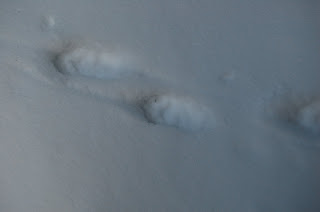 While I tend to be used to fishers using a loping pattern (1x2x1), the 2x2 gait is very common for members of the weasel family. Also, weasels have scent glands all over, so this might explain the animal's travels under and through vegetation.

Here are some tracks by another member of the weasel family: the river otter. Note the definite tail print at the base of the tree. 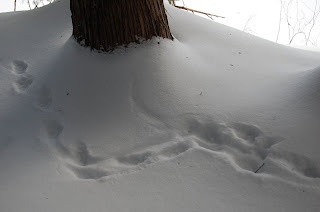 The other highlight of the trek was along the Sage Trail. I had about reached the half-way point (where the Santanoni Connector joins the Sage), when I heard the tell-tale laugh of a pileated woodpecker. I stopped and listened. I decided to backtrack and see if I could find it; I didn't have to go too far. In the distance I could see it climbing a tree in search of insects. It passed to the back side of the tree and out of sight. Then I saw what I thought was a second pileated on the next tree over! I couldn't confirm that it was a second bird because the first one was no longer visible, so, I watched and waited. I kept thinking how much it reminded me of a pterodactyl! Must be the pointy head. After about five minutes or so, luck was on my side: the first bird reappeared. I have never seen a pair of pileateds together, so this was very exciting. I took a couple photos, but I was so far away that you really have to look for the birds (dark blobs in lower left and upper right corners of the photo below). I tried to move closer, but that was enough to scare them away. Still, it was a good find. 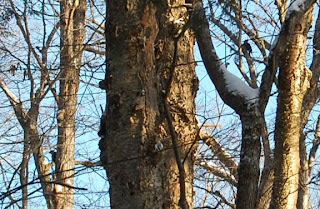