The mid-1900s found the Adirondack Park chock full of kitschy amusement venues, most of which are no longer around. The North Pole is still in operation up in Wilmington, and the Enchanted Forest (or is it the Magic Forest?) down in Lake George is open summers. The rest, however, have faded away into the dust of time.

Not too far from Newcomb, just off Exit 29 from the Northway, is/was FrontierTown, a little bit of the American West in the Adirondacks.

Many of the folks in Newcomb (and no doubt the other nearby villages) held summer jobs here, dressed as frontier folk and making memories for tourists.

Today, all that remains is the empty main building, the train depot, and a couple small out-buildings, little more than walls and roofs.

I was meeting my County Coordinator for the NYS Bluebird Society this morning to drop off unsold nestbox kits, money from sold kits, etc. Our meeting spot was the FrontierTown parking lot. I got there early, so I wandered around taking photos. 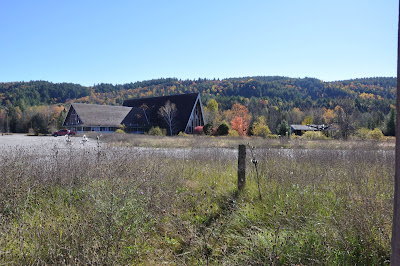 Of course, I couldn't pass up photographing the milkweed, which is at its prime right about now. 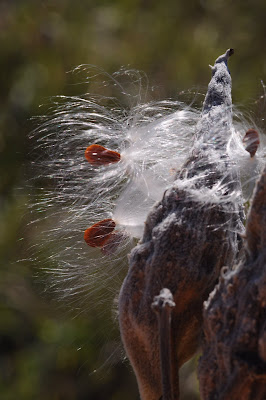 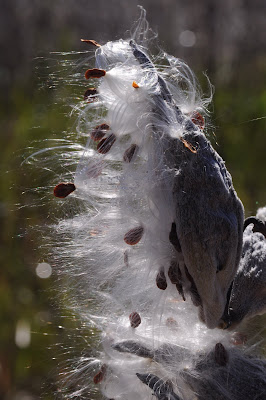 This was the first building I encountered. Was it a jail? A storage shed? 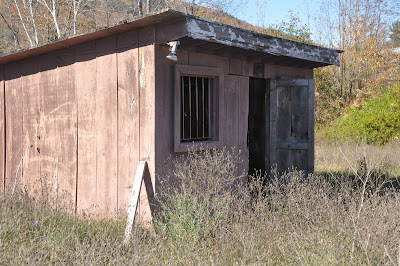 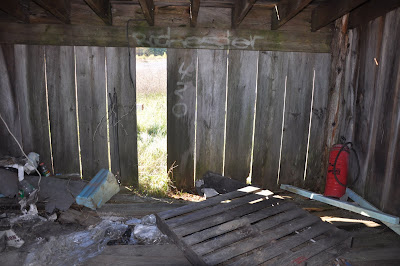 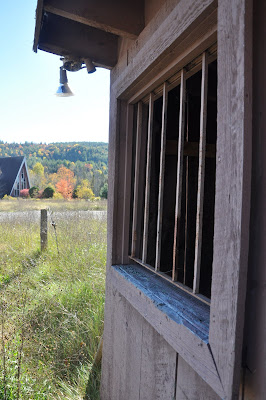 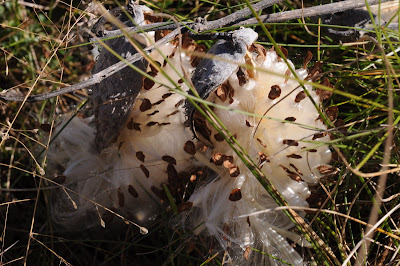 A small pond graced the property, surrounded by a split rail fence. 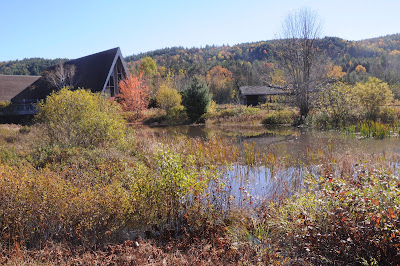 Some of the fence rails were simply coated with lichens! 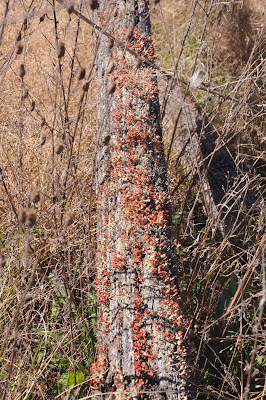 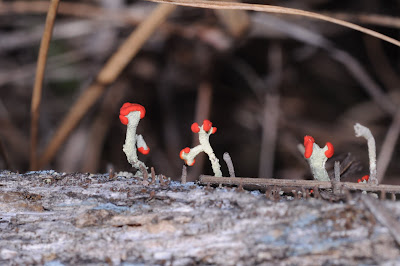 I walked around the pond and crossed the little bridge (which has seen better days). 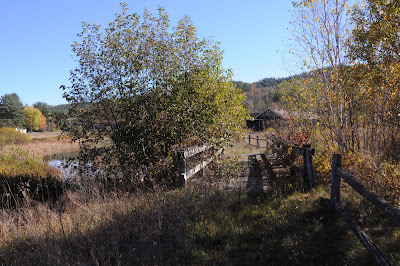 Along side the "trail" were what looked like railroad ties, albeit small railroad ties. Did they have a little train ride here? 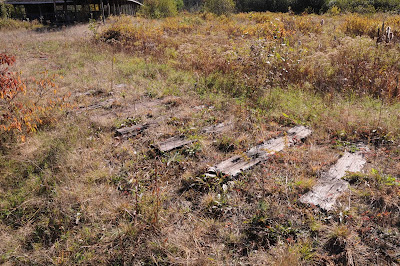 Sure enough, following the tracks, they led right to what had been the train depot. There are no trains running here any more. 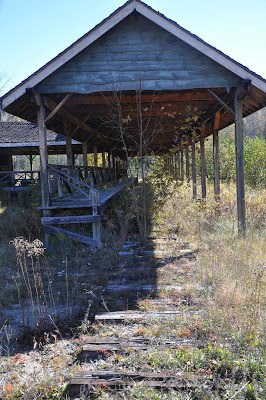 There's plenty of vegetation, though. Why, it's a regular ghost town! Minus the actual town. 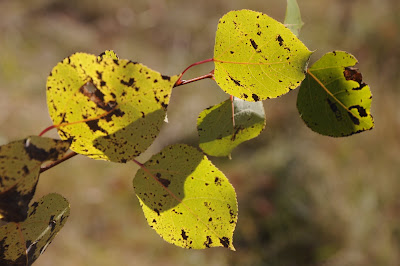 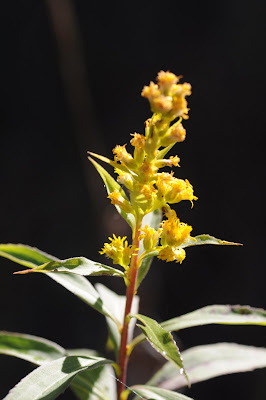 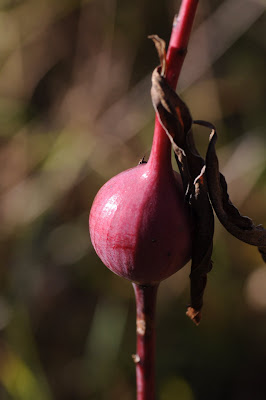 I continued past the depot toward the main building, with its tall triangular form. 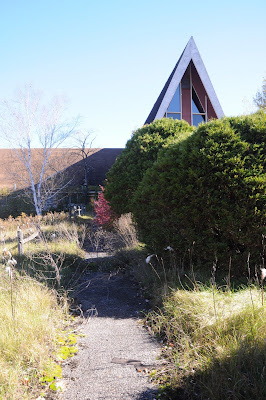 The remains of a wagon rest against the building. 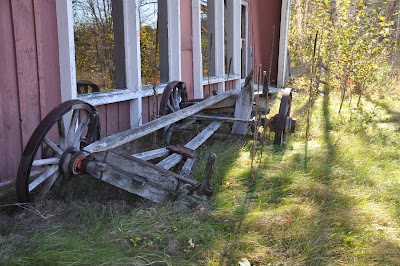 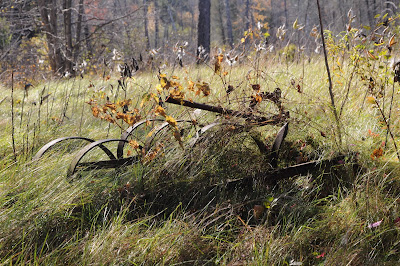 The glass had been shattered on the door that led into the Triangle, so I poked my head and camera inside. There appeared to be a stage inside. Did they have shows here? Perhaps they held dances? 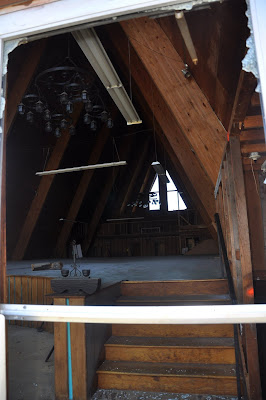 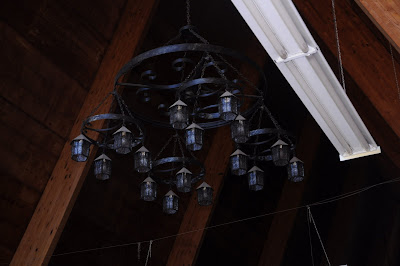 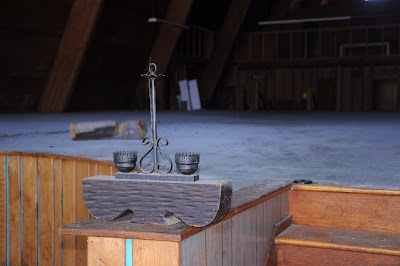 A fire hydrant lurked nearby, almost swallowed up by the vegetation. 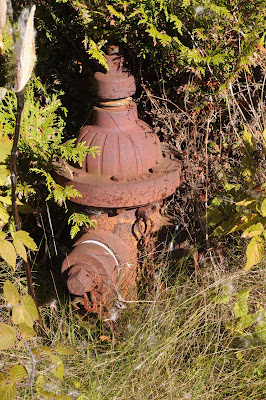 I headed back toward the train depot. 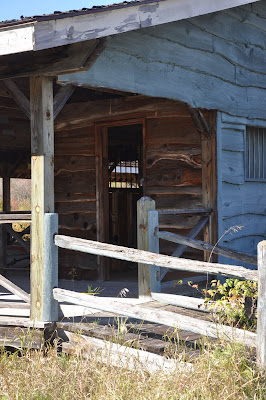 How very sad it all looks today. The original signs are still in place, warning visitors to be careful on the rides. Today I suppose they apply equally well to visitors like me who are just poking around. 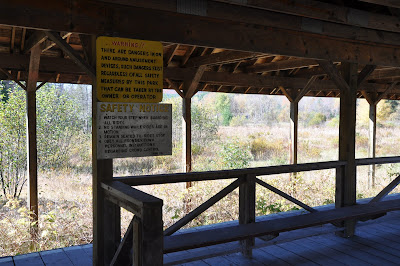 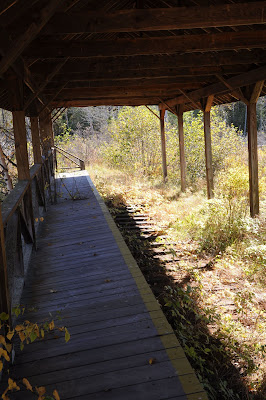 Soon Kathy rolled into the parking lot and my wandering came to and end. I gave her my bluebird stuff, we swapped a few stories, and then we went our separate ways.

I never got to visit places like FrontierTown when I was a kid. Oh, we did Disney World out in California when we lived there, but I was too young to remember. I do remember asking to go to the North Pole when we visited Lake Placid, but we never did.

The place I always wanted to visit was down in the Mohawk Valley: Petrified Creatures. I was really into dinosaurs when I was a kid, and this place had 'em. Well, I guess what they really had were fiberglass replicas, which I've heard weren't to accurate. We would pass Petrified Creatures every time we drove to my grandparents' house in Gloversville. Every time I would ask if we could stop, but we never did. I finally stopped asking. I can still remember seeing the neck and head of a brontosaurus and the ridged back of a stegosaurus peeking through the trees, behind the perimeter fence. Like all such places in the Park, Petrified Creatures is nothing more than a fenced in patch of trees and weeds today. An era has passed. The nostalgic side of me is sorry I missed them.
Posted by Ellen Rathbone at 12:41 PM