The Dry Marsh Trail at Waterloo

A busy day is on the docket today. My schedule had a house viewing in the morning, after which I thought the dog and I would take in another nature trail in the Waterloo Recreation Area. After returning home, I would have a couple hours to relax and take care of the animals before going in to work for an owl program. I am signed on to lead one of the trail walks after the indoor portion, during which we plan to try and call in some owls.

So, at 9:00 I loaded Toby in the car and off we drove toward the Waterloo Recreation Area, which was also where the house I wanted to see was located. A small house, on almost three acres, but located in an area surrounded by preserved land, including a preserved grassland just down the road.

As we left the viewing, I saw something one just doesn't see every day - a Hunting Club out for a morning jaunt. 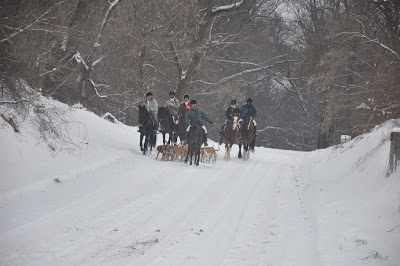 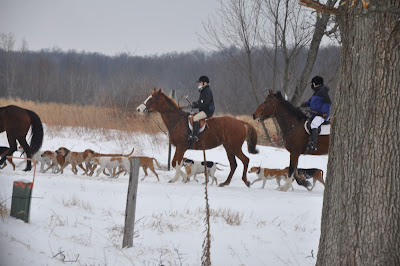 Not a hundred percent sure where I was going from there, we took the scenic route (not quite getting lost), ending up in Munith before turning around and backtracking.  Finally, I found the entrance into the park and located the trailhead for the Dry Marsh Trail. 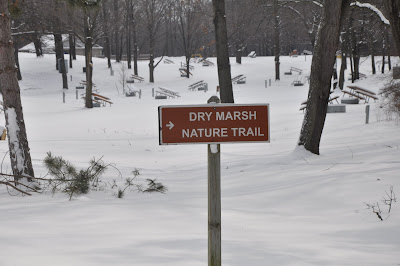 I love wetlands, so I was interested in seeing what this had to offer.  It is only a half-mile loop, but I had great expectations.

I rigged Toby up on his ski-joring harness, much more comfortable for him than his usual collar and leash set up, and much easier on me, since the rig attaches to a hip belt that I am wearing.  Frees up the hands, don'tcha know. 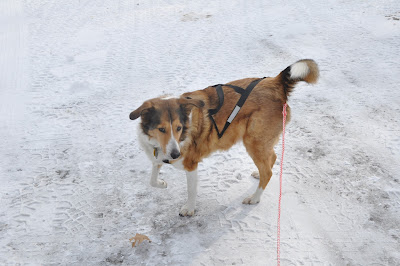 We saw an enterprising soul camping!  Winter camping...not for the faint of heart. 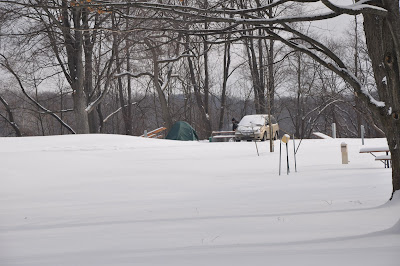 So, here we are, at the beginning of the trail.  It looked like only one or two others had been this way, but not too recently. 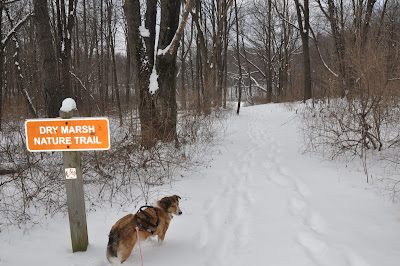 In short order, we came to what was apparently the "dry marsh".  It looked to me like an ice-covered pond. 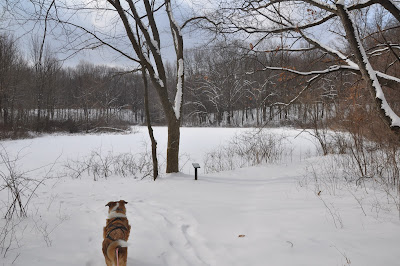 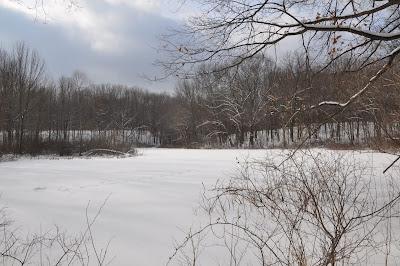 Although the previous walkers had forged out across the wetland, I opted to stick to the trail.  We weren't alone, for a deer had passed this way only moments before we arrived.  I'd like to claim that my prodigious tracking skills are of such monumental quality that I can determine time of passage from the tracks, but sadly, my skills are not of that caliber.  I knew the deer had recently been here because I saw its retreating hindquarters flashing through the trees ahead of us. 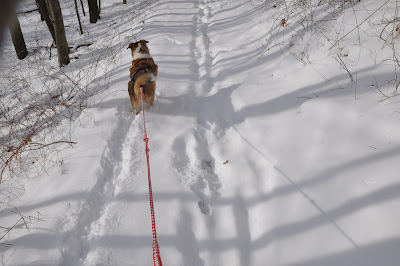 Tangled vines lined the trail in great quantity.  I was intrigued, until I discovered... 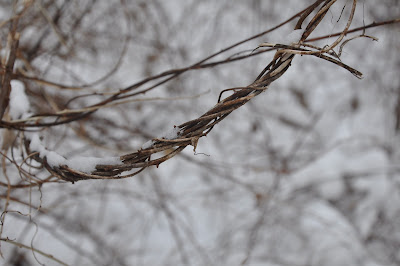 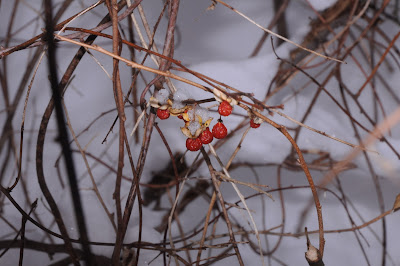 And here is an example of why this vine is problematic.  Look at how it has wound around this young sapling.  As it grows, it will strangle the tree, eventually killing it. 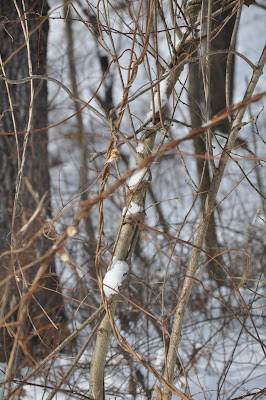 The trail looped around the end of the pond, um, marsh, and climbed up a steepish hill.  Now walking along a bit of a ridge, we had a nice view of the wetland below.  I imagine in the spring or autumn that this is a rather lovely little trail. 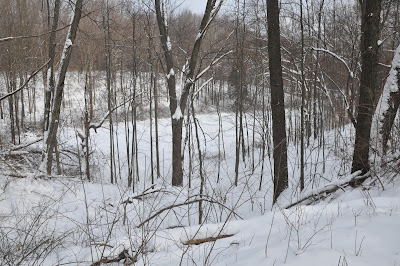 The only other thing of note we encountered was this tree.  Looks like it is rather popular with some of the local woodpeckers.  Around here, there are several species of woodpeckers (and their kin).  Downy and hairy woodpeckers are common, but we can also add flickers, red-bellieds and pileateds.  As noted in a previous post, there are red-headed woodpeckers in the region, too.  The black-backed and three-toed, however, remain further north, where the habitat tends toward boreal forest. 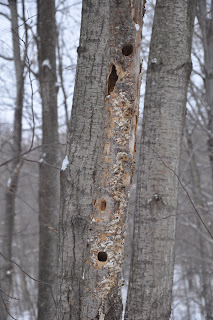 In all too short a time, we found ourselves back at the trail head.  This had to be the shortest half-mile I've every walked!
Posted by Ellen Rathbone at 3:08 PM

Email ThisBlogThis!Share to TwitterShare to FacebookShare to Pinterest
Labels: trails