Now here's something you don't get to do every day:  tour a city's composting operation.
I was at a meeting this afternoon with the Jackson Area Outdoor Coalition, and after the meeting, we all convoyed over to the city's composting project, which is operated by one of the Coalition's members.
This operation has been going for only a few short years (four?).  Every fall they collect all the leaves raked from the lawns of Jackson's citizenry.  The city park caretakers also bring in trees that are removed from parks, streets, etc.  All of this is composted at this one operation, creating some really nice compost/mulch. 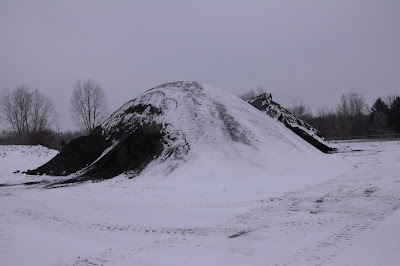 So, here' the tour.  This pile is the Stump Pile, composed of chopped up stumps that are removed from the ground when trees are taken down. 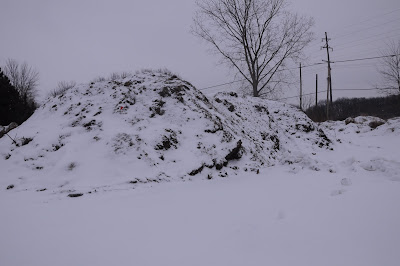 The next pile is wood chips, the remains of many trees and branches that have been ground up into small bits.  This is good for mulching gardens, but it is also added to the soil mixture they make (more on this in a moment). 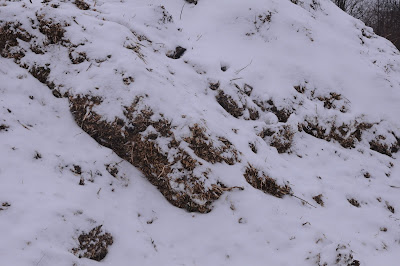 Here we have the newest pile of leaves, complete with leaf bags, collected this last fall. 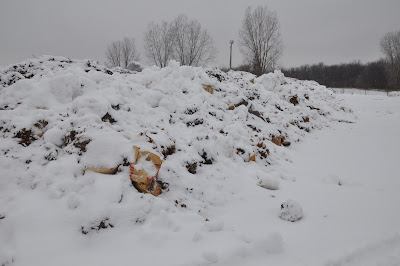 The leaves are piled into long rows, called windrows.  Here they sit and bake.  As they say, "compost happens," and here we see it in action.  All one has to do to make compost is collect organic matter, put it in a pile, and let it cook.  It will naturally heat up  - all a part of the process of decay. 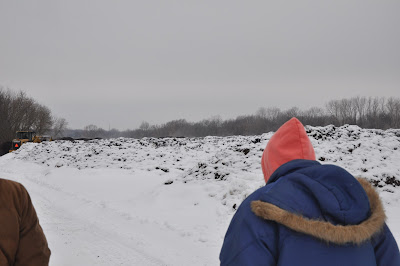 For the unbelievers in the group, Tom brought along a thermometer to read the internal temp of the leaf piles. 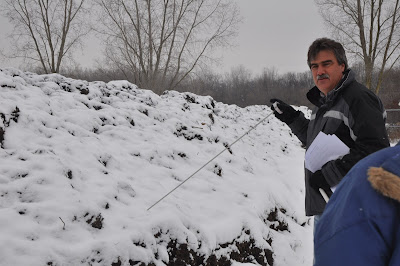 Within a minute, on this 19*F day, the thermometer soared to over 120 degrees.  When the piles reach 130-140*F, they are at about the hottest they will get.  At this temp all seeds are killed (no quackgrass to sprout from this compost), and many impurities are also negated.  It is now that the piles need to be turned over. 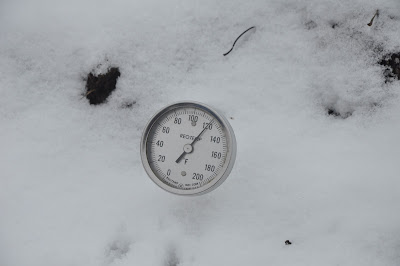 And here we see it in action.  The piles get turned over once a month (we had good timing).  Look at that steam rising! 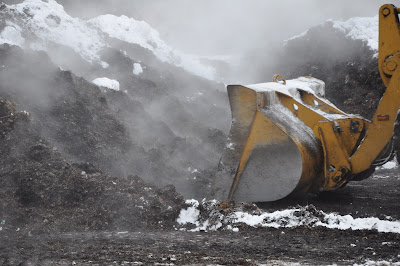 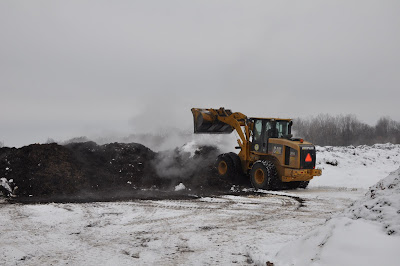 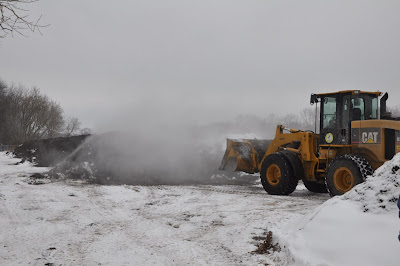 Tom grabbed a handful and we all felt it.  It was pleasantly warm, and surprisingly dry!  They like it when there is new snow when they turn the piles, because this adds much-needed moisture to the compost.  This helps the decaying process proceed a bit faster, and helps bake things well. 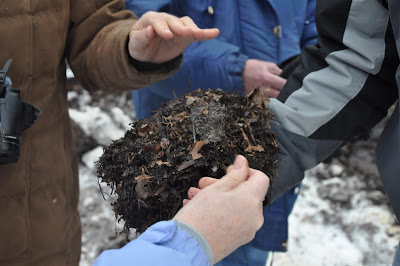 In about 15 months, a mountain of black gold is produced.  Here in Jackson, this compost is available to the public at a VERY reasonable rate.  If you live in the city, you can get one cubic yard free.  After that, it is $10 per cubic yard.  If you want it delivered, there is also a delivery fee.  If you live outside the city, but within Jackson County, you can still get the compost, but you don't get any free.  Starting some time in April, once things warm up, you can drive up on a Friday and collect compost to take home with you.  Don't wait, though, for by June it is usually all gone! 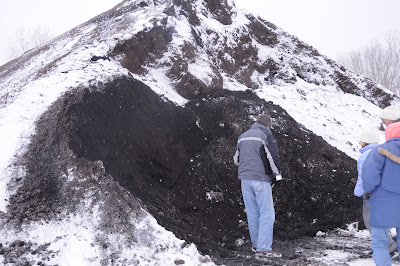 They also set some aside and mix it with the wood chips and some topsoil, creating really good soil for planting.  This mixture is used to fill in where stumps are removed when trees are taken down.  See - the whole process is recycling at its finest! 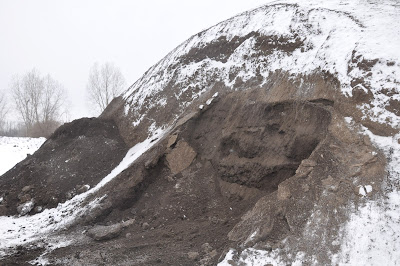 Concerned about contaminants?  Tom says they screen the mulch/compost several times, removing plastic, car parts, cans, etc.  He also told us how this compost has been proven to ameliorate contaminated soils.  Consumer's Energy has built a new building in the city on a site that was VERY contaminated with all sorts of bad chemicals (I heard them say something about chromium).  About twelve inches of this compost was added to the site, probably as part of the landscaping and as filler.  Tests now show that many of the contaminants are gone - or at least exist now in greatly reduced concentrations.  The city has even gotten calls complaining about the number of earthworms on the sidewalks after a rain - if there are worms living in those toxic soils now, they must be greatly improved.

So, I know that where ever I finally end up with a home, I will making a call to get a truck load of this black gold delivered to my land so I can work it into my soil for my veg gardens of the future.
Posted by Ellen Rathbone at 9:44 PM

Email ThisBlogThis!Share to TwitterShare to FacebookShare to Pinterest
Labels: compost