When one thinks of outdoor winter activities within the snowbelt, wading in streams and rivers in search of aquatic invertebrates isn't usually the first thing that jumps to mind.  Nonetheless, that was on today's agenda: a winter stonefly search in the Grand River Watershed.

This semiannual event is held by the fine folks who work for the Jackson County Conservation District, and is sponsored by several environmental organizations, including the Dahlem Conservancy, which hosted today's workshop.

We started the workshop indoors, receiving a brief overview of the the target insects:  winter stoneflies.  These insects are rather unique, for they emerge in the winter.  Although many of our aquatic invertebrates are active in the winter (as you will see below), these are among the few that actually "emerge" during this chilly season.  There were two families of winter stoneflies:  Capniidae, the "small winter stonefly", and Taeniopterygidae, simply called the "winter stonefly". Of the two, the former is considered much more common, and, just as a point of reference, I wrote about these last winter (see here; you will have to scroll about halfway down the post).

These aquatic insects actually hatch in late winter or early spring.  Things warm up a bit, they migrate a whole meter or so downstream to a rockier location, and enter a period of suspended animation called diapause.  Here they hang out for upwards of six months (summer) and wait for the water to cool off again in the fall.  The cooler temps awaken these sleeping beauties and they begin an aggressive regimen of feeding.  All fall and winter they feast, and come late winter/early spring, they change into adults and emerge (again, see photo previously posted, as noted above).  The cycle begins again.

Paul, the aquatic entomologist in the group, brought in a couple buckets of material from the stream running through Dahlem's property to give us an idea of some of the creatures we might encounter. 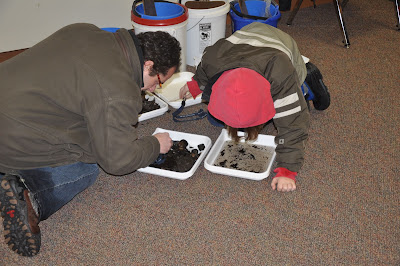 There weren't any stoneflies in the sample, but we did find some terrific critters. 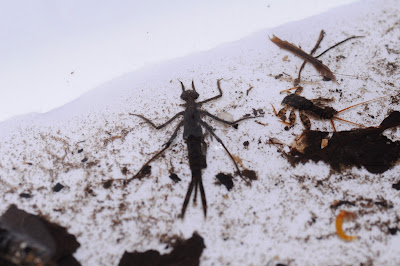 A gigantic damselfly nymph; in all my years of pond and stream studies,
I've never seen one this large. 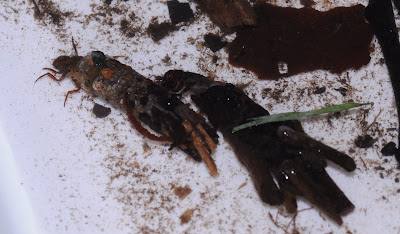 Two impressive caddiflies peeking out of their cases:
one made of sand and tiny stones, the other made of vegetation. 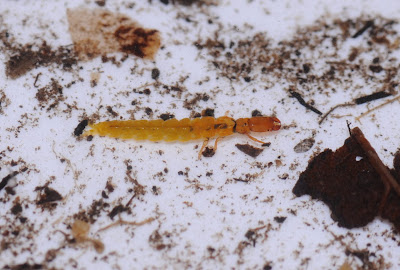 This brilliant yellow caddisfly is case-less; likely a fingernet caddisfly.
They get their name from the fine mesh nets they weave to strain
debris from the water as it rushes past; this is their food. 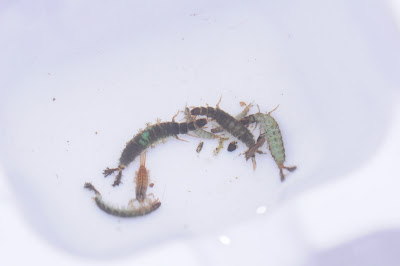 We found these greenish caddisflies at our sample site, but I'm including them
here along with the other caddisflies just so you can see all the variation.
I'm guessing these are common netspinner caddiflies, which have
branched gills on their sides, fluffy projections from their nether regions,
are often found outside their protective cases, and
when captured tend to curl up in a "C".

We had 22 people at the workshop, a record number, and each was assigned to a team.  There were four teams in all, each assigned a different stream or river for sampling.  My team headed south of Jackson to the little village of Liberty.  Our body of water:  the Grand River. 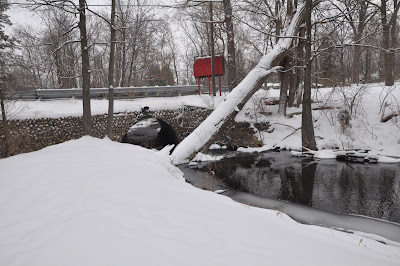 I know, it doesn't really look all that grand, but this is the headwaters region, so the river is more of a stream at this location.

Looking upstream we see the dam that holds back the waters of the mill pond. 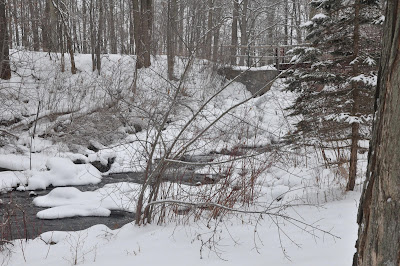 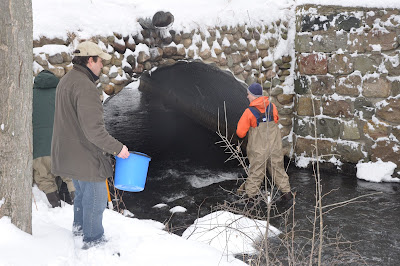 Even though winter stoneflies are especially adapted to living in icy cold waters, humans aren't.  Two of our members donned chest waders and headed into the water.  Their job was to capture stoneflies (and any other aquatics that ended up in their nets).

Working their way slowly upstream, they scraped their nets along the bottom of the stream/river, kicking over rocks, ruffling up vegetation. 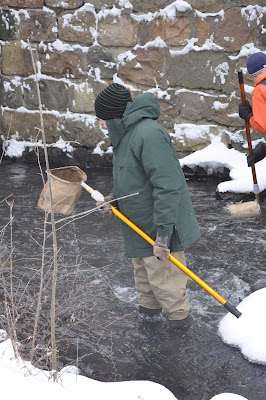 All sampled matter was transferred into a bucket... 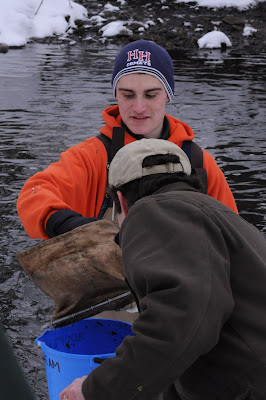 ...then brought to shore and emptied into trays.  Using tweezers, we poked through the sampled debris and snagged any wiggling creatures we found.  These were transferred to... 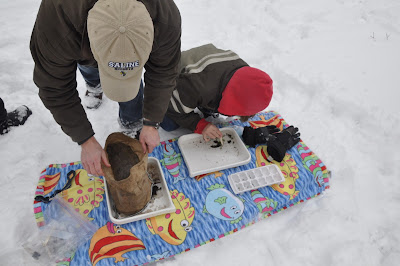 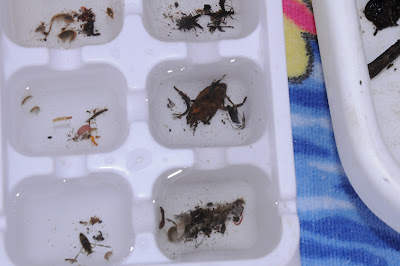 And here it is, the star of the day:  a Taeniopterygidae stonefly. All in all, our group found five of these critters.  We didn't find any of the smaller (and more common) species.  In fact, of all the stoneflies found today (upwards of 50), only one group found a single Capniidae stonefly. 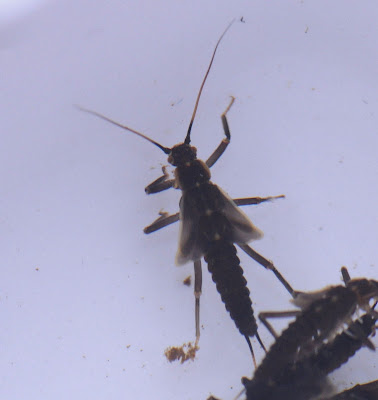 We found two kinds of mayflies.  Here is a sample of the flat-headed mayfly: 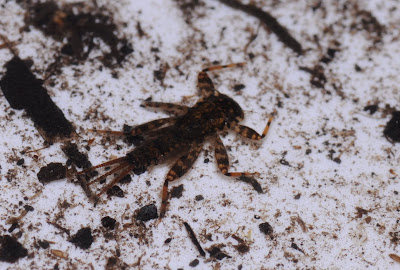 And here we have another mayfly, possibly a brushlegged mayfly (the front two legs are quite fluffy at the foot ends).  Brushlegged mayflies also have a distinctive cream-colored striped down their backs.  It obligingly spread all its gills out for me in this photograph. 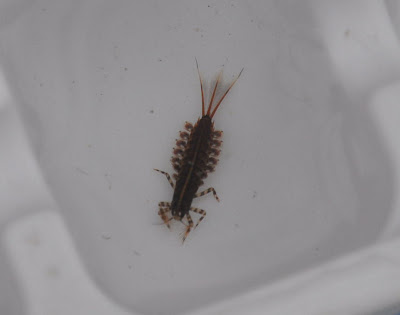 The curled up creature on the right below is a scud, or side-swimmer.  It looks kind of like a shrimp.  In fact, it is a crustacean.  Interesting factoid:  the word "scud" comes to us from Norway.  The Norwegian word is skudda, which means push.  (Hm...is this also the root for scooter?)  And, as one might guess, the name "sideswimmer" refers to the way it swims:  on its side.  A bit of a no-brainer, that.

The one on the left is an isopod.  These are essentially aquatic sowbugs, those multi-legged land crustaceans you find rippling their way through your garden soil. 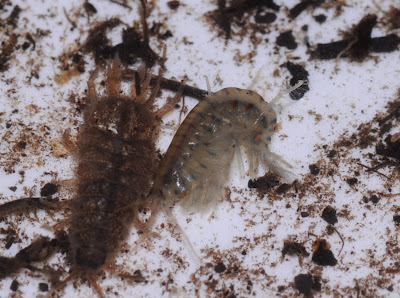 Here are a couple more isopods.  There are about 130 species of isopods in North America.  I haven't made a study of them, so there isn't too much I can tell you about them.  On the whole, they are essentially omnivores, mostly consuming small particulate debris, but not disinclined to nibble on other living things should the opportunity present itself.  Apparently some species develop a fondness for watercress, potentially wreaking havoc in commercial watercress beds. 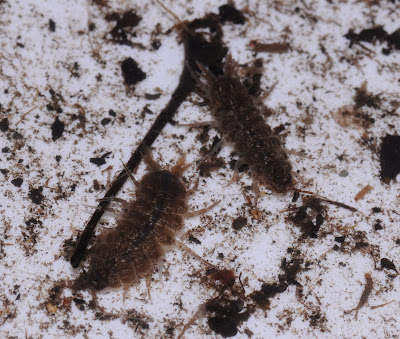 We hauled in two backswimmers.  This one was quite large, and had quite an appetite, as you will see in a moment.  Backswimmers, as their name suggests, swim around on their backs, using their long legs like oars in a rowboat. 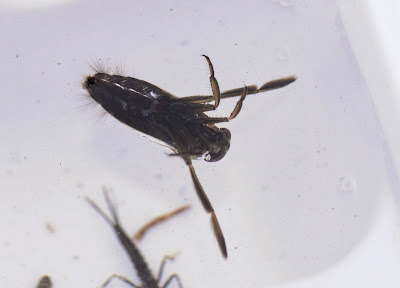 Look at all those find hairs on the foot (out behind the insect - completing a stroke)!  They must create a lot of surface area, greatly enhancing the thrust of each stroke.  Also, if you look at its back, which is below (remember, it is swimming on its back - upside-down), you will see it looks like it has a clear bubble attached to it.  That's because it does.   Here's what it says about the air-storing abilities of these insects in A Field Guide to Common Freshwater Invertebrates of North America:  "They breathe by taking an air store underwater.  The air store is held in two troughs with fringes of hair on the bottom side of the abdomen.  Additional air is carried under the wings and between the head and thorax." 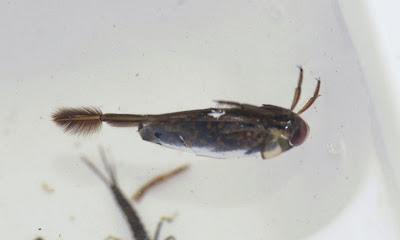 This fellow was rather aggressive and before long it had discovered a damselfly cowering in the bottom of the ice cube cubicle.  It dove down and snagged it - an easy meal.  Using its beak-like mouthparts, it pierced the soft body of its prey and sucked the life out of it.  The empty husk was later discarded.  And yes, if they object to someone handling them, these insects are known to use their beaks to bite the hand that holds them.  I hear it is rather painful.  Just ask the damselfly.  Oh, wait...it's too late for that. 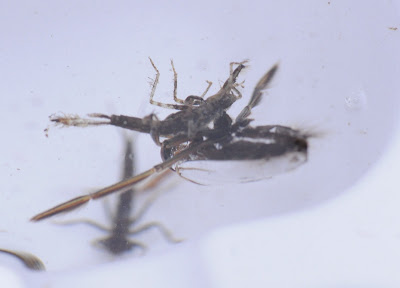 We also caught this small giant water bug.  Giant water bugs can get close to three inches in length, and like the backswimmer above, it is a fearsome predator.  It, too, has a piercing mouthpart that sucks the life out of its victims.  It was placed in the ice cube tray in the same cube as the backswimmer.  It couldn't have been too hungry, for even though the legs of these two predators tangled more than once in the cramped quarters of the cube, it never seemed interested enough to attempt to eat its compatriot. 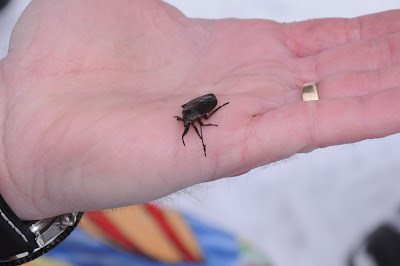 We spent about 45 minutes sampling, gathering over 15 families of insects, including many blackfly larvae.  It was a pretty good haul. 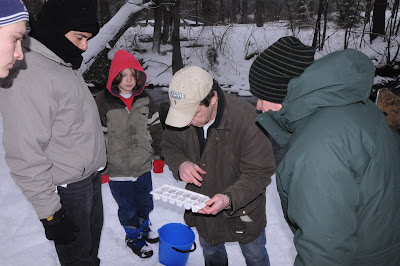 Our final conclusion:  the water is pretty clean.  In fact, all four teams came back with good results.  Everyone found at least a few stoneflies, and one group had over 30!  Not a bad way to spend a cold winter's day.
Posted by Ellen Rathbone at 9:21 PM