We begin today's adventure with a glance out the kitchen window. Lo! and behold! it is one of the rogue neighborhood cats. Hey! You! 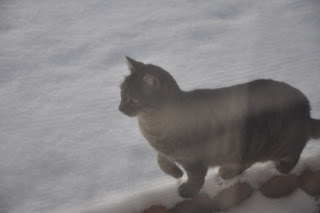 Yes, I'm talkin' to you! Where do you live and why do you skulk around my house? Are you eating the birds at my feeder? 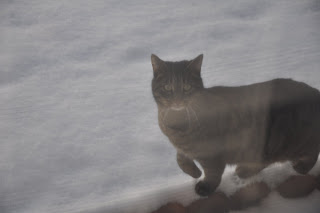 Some quick detective work has turned up the hide-away. I thought things were suspicious with that board cocked at an angle. I nudged it back into place the other night, only to find the next morning it was back in this position. Hm. Seems to me that this is where the cats (there are two that I know of - the little tiger above and an orange and white fellow) are sheltering. Could this be a source of the fleas? 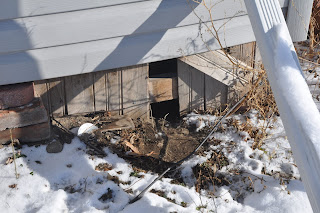 Anyway, it is a glorious winter day here in southern Michigan. I got up late (after all, the sun doesn't really start to get up until well after 8 AM, so why should I?) and the sun was shining for all it was worth in a blue blue sky. I decided the dog and I needed to check out some nature trails. 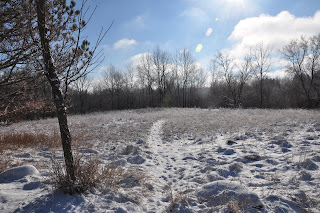 We headed over to Ella Sharp Park, which is only a couple miles away. I drove around until I found what looked like a trail going into the woods. This would be our destination.

Even though it was already about 11:30, the trees and plants were coated with thick crystals of ice - hoar frost. 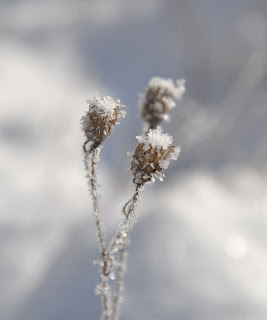 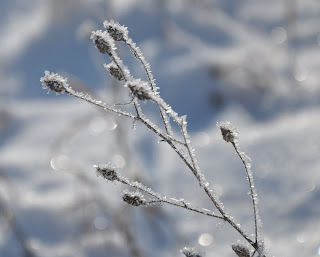 We found some Asian bittersweet along the trail once we left the field and entered the woods. This vine seems to be ubiquitous here. In just three weeks I've already seen it more often than I have the rest of my life! 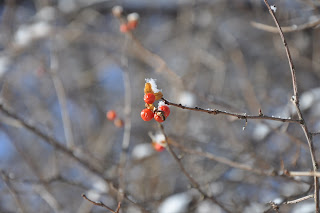 We mosied into another field. There were times where the trail under our feet was snow on ice, so I suspect this might be one of the area's many pocket wetlands. 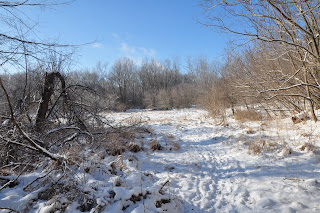 Even the tops of the trees were still frosty. Back in the Adirondacks, this frost would have burned off by this time of day. It looks like Michigan is the perfect place for us late sleepers! 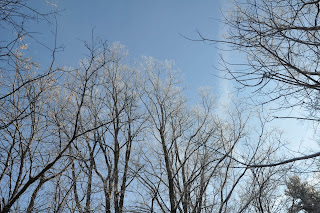 Even more common than the bittersweet is the honeysuckle. Much of the trail passed through arched bowers of the stuff. It's lovely, yes, but so invasive...as noted by the sheer numbers of plants here. 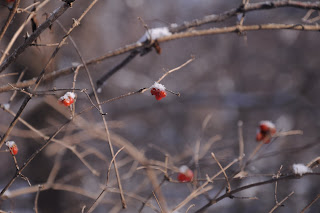 So many of the trees have lovely silhouettes. I attended a meeting of the local photography club this week. One of the things they do is assign certain topics for photographs to be viewed and judged at the next meeting. Silhouettes are on the list for the meeting in two weeks. So, I thought I'd give it a try since the sun was so cooperative this morning. However, I think the sun was just a little too bright...it was difficult to get any really good shots (but not for lack of trying). 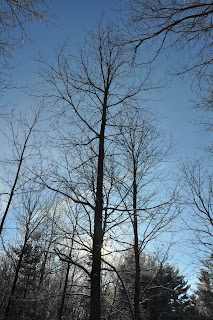 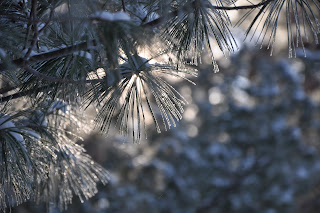 
We've had some strong winds lately, which blew the snow from the last day or two into some interesting patterns along the sides of trees. 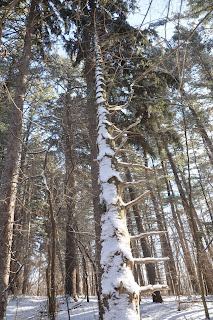 I've been told that the Grand River flows through Ella Sharp Park. Could this be it? 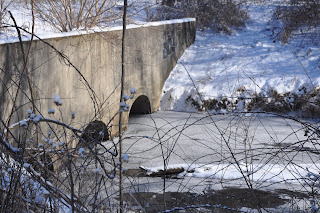 Toby's trying to form his own opinion. 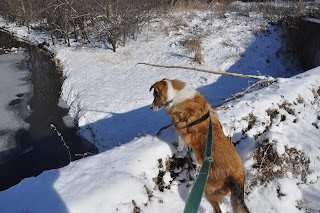 About an hour later we arrived back at the car. How bare it seems without a license plate on the front - Michigan only does plates on the back. 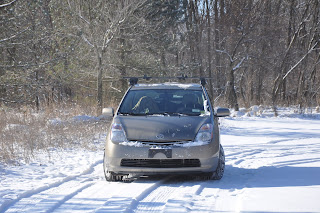 This afternoon I am off to "work" to attend a program on Winter Bird ID by one of our staff naturalists. While my birding skills are probably better than those of the average Joe, I find myself stumped by most sparrows and other LBJs - little brown jobbers. Sputzies, as my dad calls them. I hope to pick up a few good tips.
Posted by Ellen Rathbone at 12:47 PM