When I got in to work this morning, I found myself immediately headed back outside. One of the staff was out sick and his Tuesday Morning Walkers were there for their walk, but had no leader. So, I was drafted. I stuck my belongings in the office, grabbed my camera and binocs, and off we went.

I was a little trepidatious because I haven't walked the trails since this fall, and that was once in October when I came for the interview, and once in November when I was house-hunting. And Gary's been doing these walks for a couple years. He's quite a knowledgeable naturalist and I couldn't imagine that I, the newbie, would have anything new and exciting to impart to the walkers. But, one just never knows.

It was a beautiful crisp winter morning. The snow is mostly gone, but there is plenty of ice on the water. 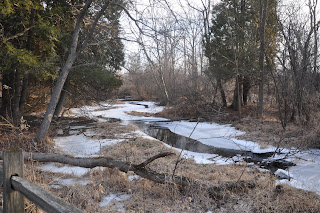 We found some goldenrod galls, which I dutifully cut into in search of larvae. Two had holes on the outside, a pretty good indication that a chickadee or some other small bird had gotten there first. A third one, however, yielded a brown larva. It was either dead or a pupal case. The wind blew it away before I could make a close examination, though.

The woods around here are just full of oak trees, so I had everyone find an acorn cap. Soon I had them all blowing shrilly on their new acorn cap whistles. I usually do this with kids, but even adults have fun making these cheap noise-makers.


WARNING - what follows may be too gruesome for some people.


Our best find of the day was this partially eaten mouse. It hadn't been dead long (day-wise, not minute-wise). The spinal chord was severed, and only a little bit had been eaten. 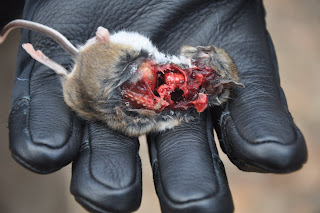 What could have done this? Canids were out - they'd just swallow a small morsel like this whole. We considered a raptor, which will often snap the neck of its prey, but why would it leave it behind? Then someone suggested a weasel. Hm. This is a very good possibility. Weasels bite their victims on the back of the neck, and sometimes weasels don't eat their prey. Whatever the reason, it was a nifty find.

The next question was: what kind of mouse is it? I've addressed this a couple times in the past: deer mice and white-footed mice can be difficult to tell apart. 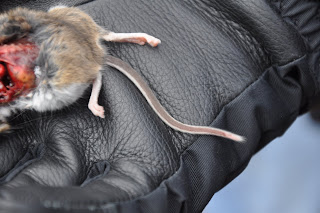 Deer mice, however, do have a definite bi-colored tail: dark above and white below. They also have a small tuft of white hairs at the tip of the tail. The deer mouse's tail is usually a bit longer than the animal's head+body length, where as the white-footed's is slightly smaller. I didn't get this measurement, but the tail coloration is leading me to believe that this is a deer mouse.

So, you just never know what you will find when you go out for an explore. You might not find anything that strikes you as "wow," but then again...maybe you will.
Posted by Ellen Rathbone at 7:23 PM