Again, for the faint of heart, be warned:
what follows are photos of the deceased.
Last Tuesday, while out with the Tuesday Morning Regulars, I spotted the remains of a fox squirrel just on the far side of the trail's railing.  Being me, I had to scramble over the railing and get closer - a photo op for sure! 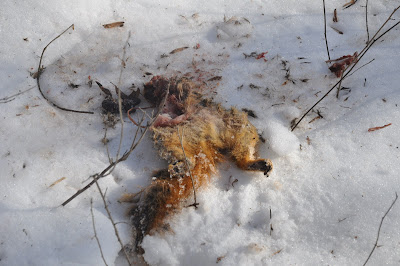 Whatever had ended this squirrel's life had done a pretty good job of eviscerating it.  The undesirable bits were left to the side, and the remaining skin had been partially turned inside out.  A clue to the perpetrator, perhaps? 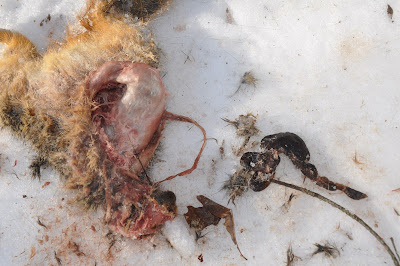 So, imagine my surprise today to find this: 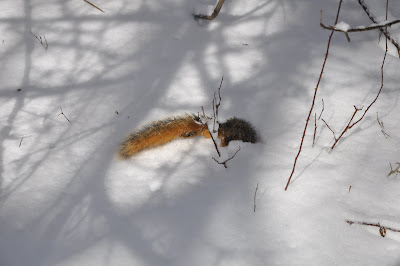 Now, I was pretty sure this wasn't a squirrel concentrating really hard on digging up an acorn frozen into the ground.  Nope - it had to be another past-tense squirrel.  We all had to get photos of this unusual sight, and then I went to pull it out. 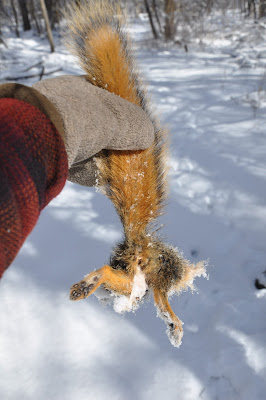 Oops!  There wasn't anything "in" to pull "out" - it was merely the nether region of this squirrel lying on top of the snow.  On top?  With no snow on it?  Then this must've landed here fairly recently.  Hm.  What happened?   Based on the good condition of the tail, this wasn't the remains of the same remains I found last week - this was a whole new squirrel.

I pocketed the body (or what was left of it) and took it inside for further investigation.  Here was what we found - a series of paired holes: 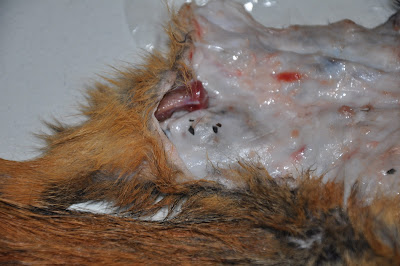 Our conclusion?  Raptor.  We surmise that some hawk probably picked this squirrel off the side of a tree.  It then grabbed the flesh of the animal and pulled it loose from the skin - the tips of the beak pinching (putting holes in) the skin as it did so.  Grab, tug, grab, tug, grab, tug - and then fling the unwanted portion (skin, tail, back legs) away.  This would also explain why there were no signs of a predator around the discarded skin (no tracks, no wing marks).

We got to see the foot up close, too - what a beautiful structure it is! 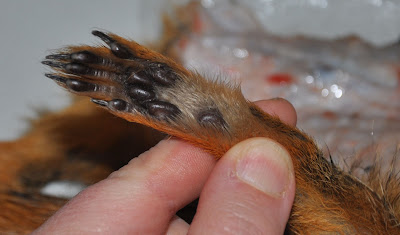 And note the stunningly rich coloration of the fur.  That's a fox squirrel - no doubt about it. 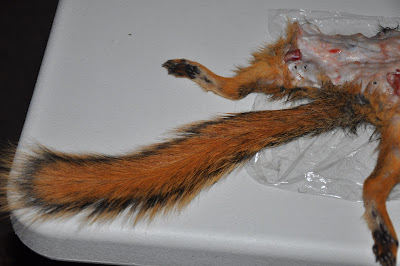 Ah - the joy of being a naturalist.  Who else would find such a discovery so fascinating?  I love my job!
Posted by Ellen Rathbone at 8:08 PM