While driving back from a school program today, I heard the end of a blurb on NPR about there being spectacular northern lights tonight.  Could it be?  I would have to go somewhere out in the country, away from the glare of the city lights, to check them out!  Where would I go?

AH - of course - there is the property I'm looking at possibly purchasing out south of Grass Lake, north (-ish) of Napoleon.  It's rural country - farm country.  If there was any place nearby to see an auroral display, this would be it.

I forgot that tonight is the full moon.  This became apparent immediately as I drove eastward out of the city:  the glare of the moon was as strong as the street lights and the headlights of on-coming traffic.

I pulled in to the driveway of the old farm house and stopped.  It was too early to see anything, so I decided to take the dog for a walk, and to pace out the boundaries of the property, to get a rough idea of just where they were.  A bit over four acres - that's a good-sized chunk of land!  We walked up the dirt road, hopping in and out of the field edges, until a dog chased us back from whence we came.  Then another dog set up the alarm as we neared the property, so we detoured into the field.

When we returned to the car, I put Toby inside and set up my camera.  It was still too early for northern lights, so I decided to capture the full moon behind the gnarly tree in the yard. 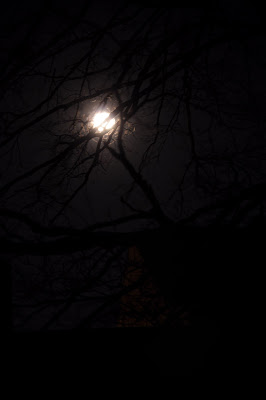 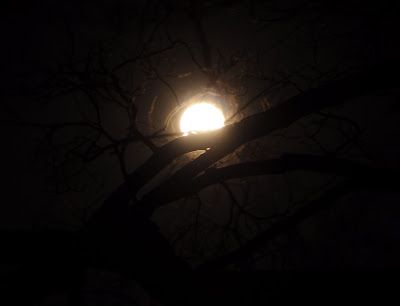 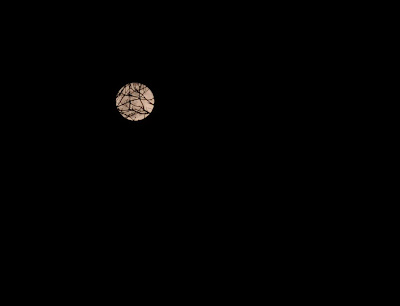 I didn't quite capture the images I wanted.  Too much of my photography is simply done by guessing.  I really should sign up for a course and learn how to actually use the digital camera.

Next I turned my attention to the stars.  Orion was putting in a good appearance to the south. 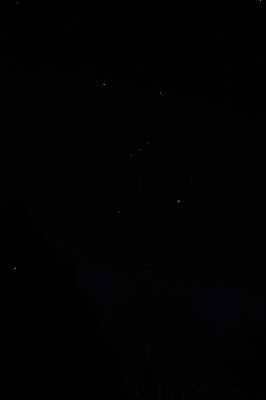 A little enhancing of the image on the computer brought out the stars (and trees) a little better. 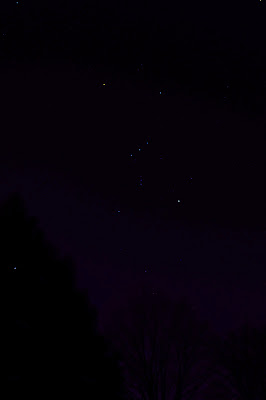 I was hoping for a sky full of stars, like the sky back in the mountains.  I miss that sky, with its millions and millions of stars.  The sky out here at the farm house held no more stars than what I see from my hovel in the city.  Still, that is probably because of the full moon, whose beautiful light completely washed out the sky.

I stuck around for about an hour, but the wind was blowing mightily, and the dog was not happy sitting in the car and waiting.  The temp was dropping and since I have to be at work tomorrow, I decided to call it quits.

If anyone sees the northern lights tonight, I hope photos are taken and shared!
Posted by Ellen Rathbone at 9:42 PM