A Face Only a Mother Could Love?

A friend of mine is a wildlife rehabilitator (a rehabber), and you just never know what animals she might have under her care when you visit. Birds are one of her specialties, but she also does small mammals like minks, squirrels and raccoons. 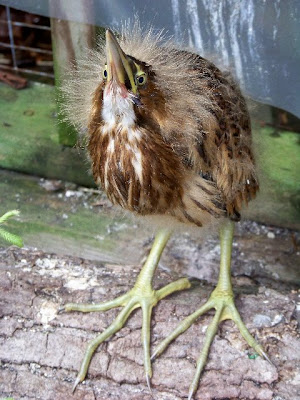 Check out those enormous feet!

Here is a close up of that wonderful face (don't you just love the "bad hair day" and the way he peers at you around that upward-pointing beak?): 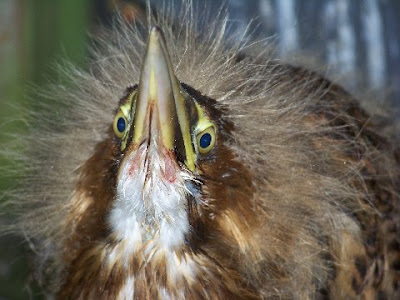 This is a baby American bittern, a member of the heron family. Someone brought it in, claiming it was "found abandoned." Because bitterns are difficult to locate, finding a nest and plunking this little guy into it in hopes that it would be adopted wasn't an option, so the rehabber had to take it in.


Too often a well-meaning person sees some baby animal and thinks it is abandoned, when in fact the parents are likely nearby, waiting for the human to go away before they move in to continue their care for Junior.


If you find yourself in such a situation, you should follow this dictum: If you care, leave it there. For example, let's say you found an "orphaned" baby robin sitting in your yard. You should leave it alone, but keep an eye on it. Chances it fledged early and the adults are waiting nearby with food. They will continue to care for it. If you have been watching it (continuously) for two or three hours, and no adults show up, then you should place a call to your nearest rehabber for advice and a possible pick up.

If you want to read more about bitterns, zip over to the Adirondack Almanack and check out the piece I wrote for them:
www.adirondackalmanack.com/2009/06/american-bitterns-groovy-little-heron...

Ammendment: It seems the Almanack's archive for June (the bittern piece was 3 June) doesn't go back beyond the 23rd. So....I will reprint it for you here:

You just never know what will dash in front of your car up here in the Adirondacks. The other day I was driving towards civilization, cruising past a couple marshlands, and a bittern flew across the road in front of me. The American bittern (Botaurus lentiginosus) is one of those really cool birds that few people get to see, thanks to its solitary nature and its stupendous blending capabilities.

A member of the heron family, the bittern stands about two feet tall. Like all herons, it has long skinny legs and a long, spear-like bill, which it puts to good use catching its prey. Chances are, if you see a bittern it will be busily hunting. Not that you can tell, for it will be standing stock still, waiting for food to come by. When a fish, frog, snake or yummy-looking insect gets too close, the bittern’s long neck snakes down quick as a flash and the unlucky food item is snared. After a killing bite, or a vicious shake, the food is swallowed head first.

If, however, the bittern sees you first, it will likely go into its blending act. Bitterns are denizens of wetlands (bogs, marshes, wet meadows), and they hang out where emergent vegetation is tall (cattails and bulrushes). When they feel slightly threatened, these small herons thrust their beaks straight up towards the sky, exposing their striped necks and breasts. Now, instead of seeing a bird-shaped thing, you see a collection of plant stems, for the stripes are tan and blend right in with all the surrounding vegetation. If you look closely, you may see the two bright yellow eyes peering back at you around the sides of the beak – a bizarre sight if ever there was one.

But the best (and strangest) thing about this bird, in my humble opinion, is its vocalizations. Pliny, that great philosopher of old, thought the bittern (that would be the Old World bittern, not the American bittern) sounded like the roar of a bull, which in Latin was/is boatum taurus. From this we get the genus name of bitterns everywhere: Botaurus. I’ve listened to bittern calls, both recordings and in the wild, and to me they don’t sound at all like a bull. For me the sound brings to mind the soundtrack accompanying a slow motion drop of water hitting a pond. Others claim it sounds like congested plumbing. Some of the bittern’s additional common names are suggestive of the sound: thunder-pumper, mire-drum. In order to make these strange sounds, the bird’s throat/neck goes through some stunning contortions; a friend commented to me that when he witnessed this he thought for sure the bird would give itself whiplash. To hear the bittern’s call, follow this link http://www.allaboutbirds.org/guide/American_Bittern/id and look down the left side of the website for the button that says “Typical Voice”; press play.

If you want to hear (or see) a bittern yourself, hie ye to a nearby wetland with tall emergent vegetation around dawn or dusk (take your bug shirt). Find yourself a comfortable spot near some cattails and water, and wait. If bitterns are around (and they are fairly common), you are bound to hear them “booming” before too long. If you are really lucky, you may even catch sight of one as you peer into the cattails. Beware; it might just be peering back at you.

Posted by Ellen Rathbone at 2:48 PM