New Plant for Me and a Warning 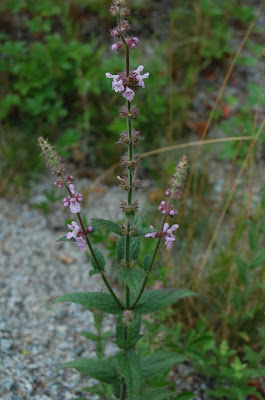 I've walked by this plant for a couple weeks now, meaning to ID it and photograph it. Today I drove to it on my way to work an keyed it out: Purple Giant Hyssop (Agastache scrophulariaefolia) - what a great species name, eh? 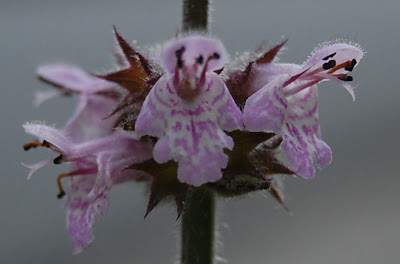 I knew it had to be in the mint family, for it had a square stem (major clue). It was also extremely hairy. The flowers are mostly gone now, but a few were still clinging to the raceme.

Goldenrods are just starting to open, a sure sign that the summer is well underway. And yet, I tend to think of them as end-of-summer plants. We also have Queen Ann's Lace opening now, adding a nice touch to the roadsides and fields.

Oh...the sugar maples are already starting to change color between Newcomb and Long Lake. Hm...I wonder what kind of color we will have this fall, thanks to the rain and overcast skies of summer.
******************
And now, the Warning: Last night a friend called me to ask about Wild Parsnip (Pastinaca sativa), which she found (one plant) along the river. She was very concerned because she had just heard a report on the news out of VT that this invasive plant was on the move and dangerous to encounter. I told her that it's all over at the scenic overlook here in town, and she was surprised. "Should we post a bulletin and alert people?" she asked.

So, with a nod to Edna, I am posting it here. This is what wild parsnip looks like: 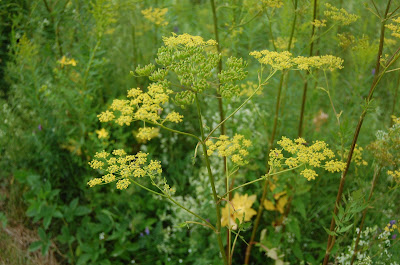 It is an alien invasive and it can be dangerous. It is in the carrot family, with leaves that remind me of celery, and has a greenish-yellow flower that is similar in shape to Queen Ann's Lace (to which it is related).

The problem with wild parsnip is that it can cause phyto-photo-dermatitis. In other words, the chemcials in the plant's juices can make your skin super sensitive to ultraviolet light and therefore make your skin burn upon exposure to light. Think extreme sunburn.

"The chemicals in the plant that cause this problem are called furocoumarins. When absorbed by your skin, they're energized by ultraviolet light, causing a breakdown of cells and skin tissue. This leaves you with a red, sunburn-like area. (Don't think you're safe on a cloudy day - you can still get burned since ultraviolet light is present even on cloudy days.) Once exposed, your skin will turn red within 24 to 48 hours. In many cases, after the skin reddens, blisters appear--some of them pretty big. Sometimes the area that was burned takes on a dark red or brown discoloration that can last for as long as 2 years.

"Parsnip burns often appear as streaks and long spots. Can you guess why? It shows up where a juicy leaf or stem dragged across the skin before exposure to the sun. The good news is, while it might hurt for awhile, the burning feeling will go away in a day or two. This is different from poison ivy where the itching can last for weeks." (dnr.wi.gov)

I've been walking around wild parsnip for years and so far haven't had any problem with it. Either I have been lucky enough to actually avoid the plant, or I've only had it touch my clothes. The dog doesn't seem to have suffered any from his contact with it, either. That said, it is never wise to take chances, so avoid this plant when you can.

If it is growing on your property and you want to remove it, you need to cut the root off below ground. Use a sharp spade or a dandelion fork, and wear gloves, long pants, and long sleeves. If you have a lot of it, repeated mowing with a brushhog should keep it under control. Be sure to cut before it flowers - you don't want the flower to produce seeds and spread.
Posted by Ellen Rathbone at 12:20 PM