Afternoon with the Blue Jays

It was a sunny afternoon and the Jays were in the 'hood. I couldn't resist a) watching them extricate peanuts from the peanut feeder and b) trying to capture it "on film." So, here we go... 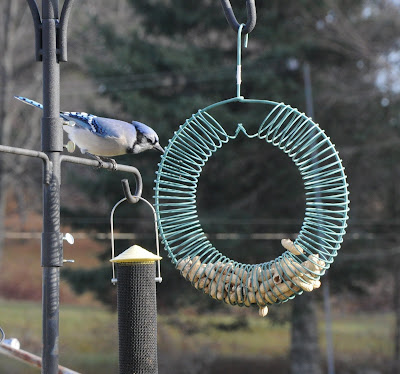 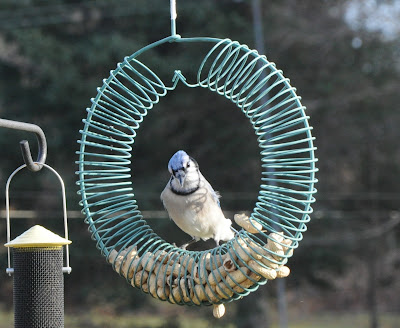 Step Three: Make sure there are no spies around to steal your technique: 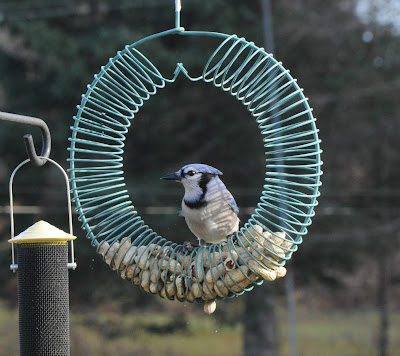 Step Four: grab the biggest nut you can find and pull. 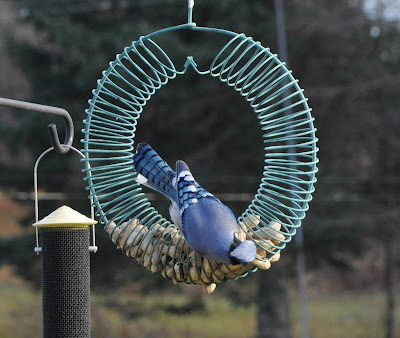 Step Five: Fly away with the bootie! 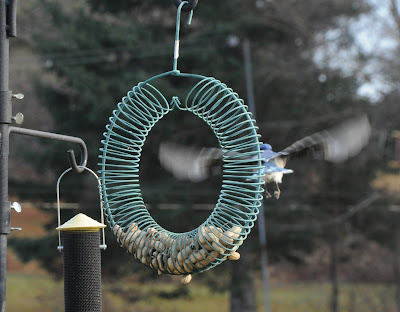 Sometimes the rest of the family shows up. Things can get out of hand. Sharing is not in their vocabulary. 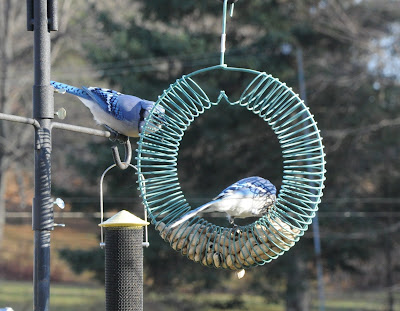 It's MINE! Go away and find your own peanut feeder! 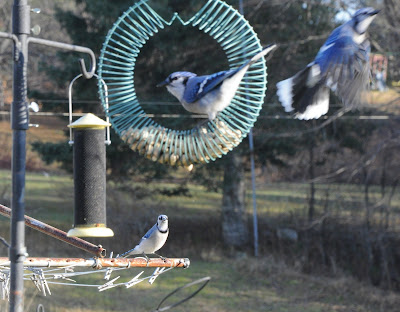 Sometimes you cannot get a hold of a whole nut, and you have to work your way through the shell instead. 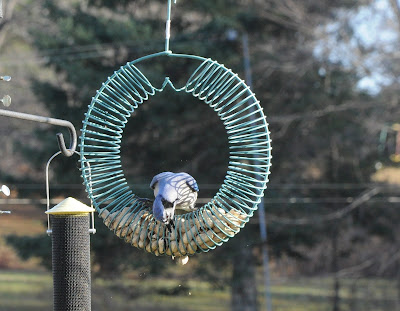 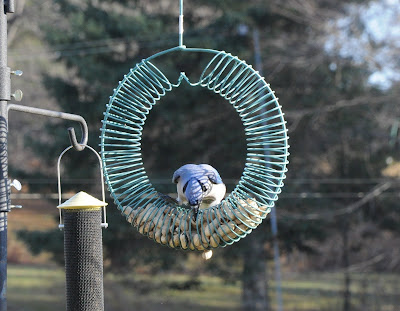 Success!!! Swallow the nut whole and grab another. 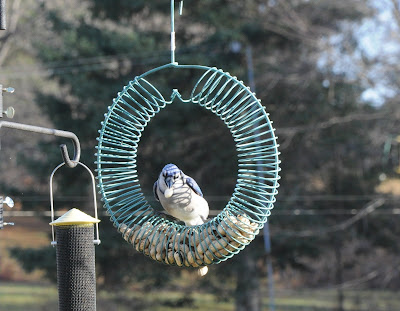 The clean-up crew is always on hand to grab any nuts that fall on the ground. 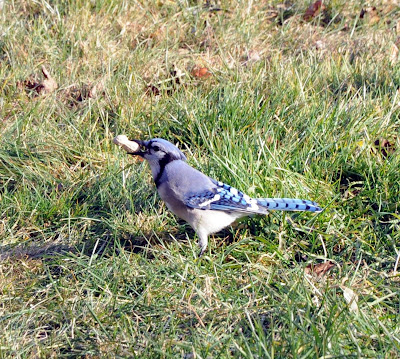 Blue jays (Cyanonsitta cristata) are amazing birds. Members of the Corvid family, which includes crows and ravens, they are highly intelligent. You can see this in the way they assess situations, especially if food is involved.

Lots of people don't like Corvids. Instead of seeing highly intelligent birds, they see "mean" birds. We have to keep in mind that terms such as "mean" and "cruel" are human labels. We really shouldn't use them to describe animals and their behaviors.

One of the things that many people don't like is that Corvids have been known to eat eggs from other birds' nests, or even nestlings. Blue jays are not exempt from this habit, but the greater part of their diet consists of nuts, seeds, grains and insects. I think eggs and such make up less than 1% of their diet, and it's probably more of an opportunistic thing, rather than a regular habit.

One of the really cool things about blue jays is their gular pouch. This structure is essentially a sac that is located beneath the bird's tongue and extends down the throat to the upper portion of the esophagus. The purpose of this pouch is storage, and anyone who has watched jays at their feeders will readily agree as to its effectiveness. Blue jays can stash two or three acorns in this pouch, and then carry a fourth in their mouth and a fifth at the tip of the bill. Just imagine how many sunflower seeds they can haul off! If you don't believe me, set out a tray with seeds on it and count how many the bird inhales before flying off. You can see a pretty full pouch in the photo of the jay protecting the feeder from it's sibling(s).

Take a good look at the last photo, the one with the jay on the ground. As I continued to watch this bird, it tried to swallow that whole peanut, shell and all! I guess it thought that if it could swallow an acorn, then a peanut would surely fit! I don't think it succeeded before flying off.

Do blue jays migrate? This is actually a great question, to which the answer is yes, no, and sometimes. Studies have shown that young jays are more likely to migrate than adults, but sometimes adults do, too. In addition to this, a jay may migrate one year, but not the next, and then maybe the third year it will...or not. There is apparently no way to predict if or when jays will get the urge to see what's beyond the horizon.

And just like every zebra has different stripe patterns from every other zebra, apparently blue jay masks are all different. Some biologists believe that this variation allows the birds to recognize each other as individuals. See...I told you they were highly intelligent. I'd be willing to be that without a lot of study most of us would never notice the differences from one jay to the next. Hm...I see an afternoon project in this...
Posted by Ellen Rathbone at 11:57 AM