Another Night in the Cold

Okay, I promise this is the last set of night sky photos...for a while.
I scoped out viewing locations on the golf course last night while walking the dog. The spots I thought would be good, weren't so hot, and I ended up in a very easily accessed spot, on a bit of a slope, with great views of Santanoni Mountain.
When 8:30 rolled around, I loaded up my gear. With my ISO set at 3200, I was able to take shots no longer than 15 seconds, which cut down immensely on the blurring.
The big dipper was glorious over Santanoni: 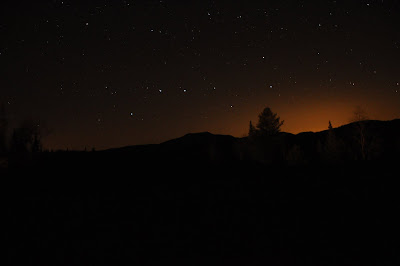 The Milkyway is always spectacular: 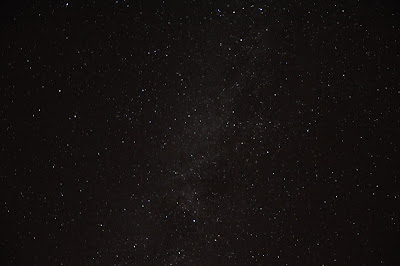 It was too early for Orion to be up, so I went back home to wait. About 10:30-ish I opened the back door to let the dog out in the yard, and Orion was up enough for me to get this shot: 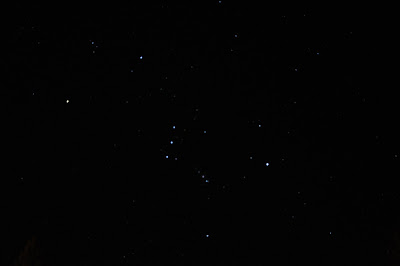 At 1:30 AM Orion had gained enough altitude that Sirius, the nose of the constellation Canis Major, was visible. But, it was late, I was only up because the dog wanted to go out, and I wasn't about to set up the camera again. Maybe later in the winter when Orion rises earlier and Sirius is visible by 8:00 PM.
In fact, I find winter to be the best time for stargazing. I suspect it is because the atmosphere is clearer - low humidity. I've also read that pollutants are reduced in the winter sky. Whatever the reason, on a clear night in winter the stars are absolutely stunning. It is also the time of year when easily recognizable constellations are visible: Orion, the Dippers (although the Big Dipper is technically an asterism, an easily recognized shape that is part of a larger constellation, in this case Ursa Major), Cassiopeia. The only downside of winter stargazing is the temperature.
Posted by Ellen Rathbone at 10:15 AM