Following the Path of the Beaver

Yesterday I decided to get on record the current status of our "new" beaver pond. With camera and lenses in tow, I schlepped down the Sucker Brook Trail and out around to the "Beaver Bridge." 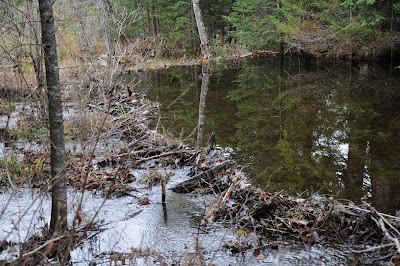 Activity at the bridge proper didn't seem to be much different than it was a month or two ago, although the low dam on the side did seem just a wee bit more substantial than it was. The biggest change was how much water was now flowing into the woods below this low dam. 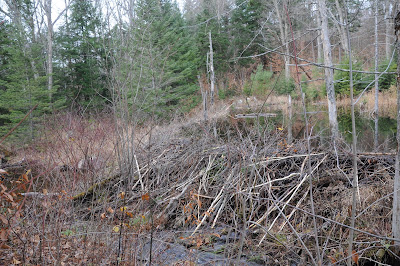 I walked up the spur trail to the pond. The beavers have done quite a lot of work, not only repairing the old dam, but also expanding its reach. 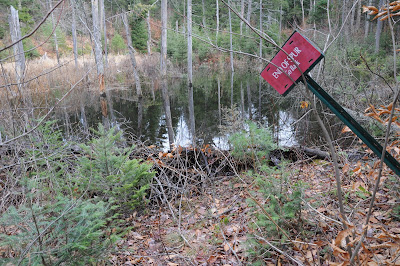 This is where I photographed frogs way back in June and July. The marshy pond edge with its assorted vegetation is now part of the dam project. All vegetation is submerged. I wonder how the frogs feel about the change to their neighborhood. 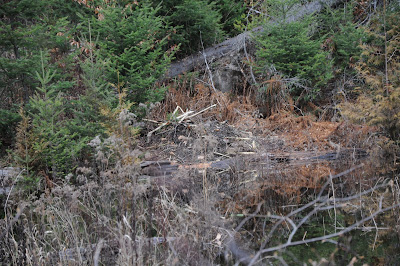 On the far side of the reconstituted pond, I could see what appeared to be the outer portions of a lodge built into the shoreline. 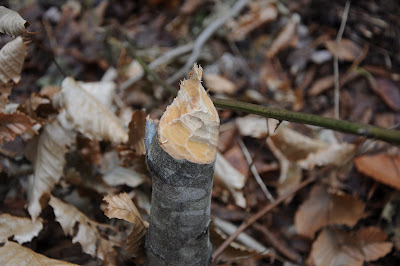 I was determined to get closer, so I began my trek around the pond. Beaver activity was prevelant everywhere I looked, from gnawed-off stumps, 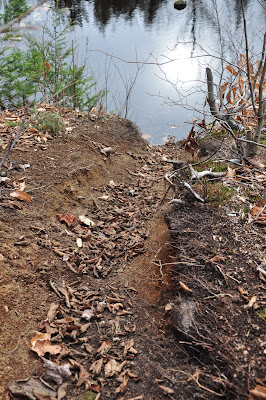 Beavers build ponds for a couple reasons. One is to make the water deep enough to allow access to food supplies stashed under the ice in winter. If the water is too shallow, it freezes solid from top to bottom, sealing the rodents in their lodges and effectively cutting off all access to the larder. The other reason is to reach food that has yet to be harvested. Beavers can make quick work of edible trees in an area, and once the immediate food sources have been harvested, they must forage further afield. A beaver on land can be an awkward animal, and its ability to escape danger is severely limited. So, in order to improve its odds against any would-be enemies, the beaver wants to stay near water, where its aquatic agility quickly turns the tables in its favor. With this in mind, the beaver digs channels leading to the next available food sources. These channels fill with water, making escape and transport much easier. Of course, one can only dig channels just so far...after a while it becomes more efficient to simply move on to new feeding grounds and start a whole new construction project: dam the stream, build a pond, put in housing, and harvest the timber. 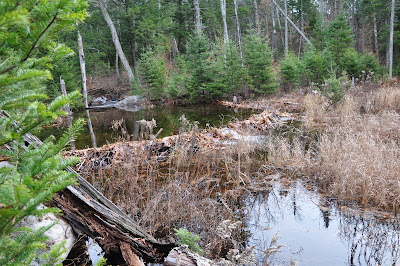 Our industrious beavers have been very busy. First, they built the lower dam next to the bridge. Then they moved upstream and repaired the old dam, reflooding the pond. Now they have also built a low dam where the Little Sucker Brook enters the "new" pond. And I found one more small dam further up the stream. 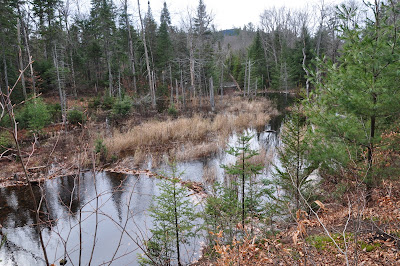 The pond turned out to be a lot more extensive than I had originally thought. Here we are standing up near the inlet, looking back across the new upper dam, with the bridge and Sucker Brook Trail juuust visible among the trees in the distance. I'd estimate the pond is between one and two acres in size. It's hard to believe that only a few short months ago Edna and I were standing on dry ground here, looking at black fly larvae in the Little Sucker Brook as it ran through the former pond. You can see the stream's course here, but it is now much deeper and wider than it was this summer. 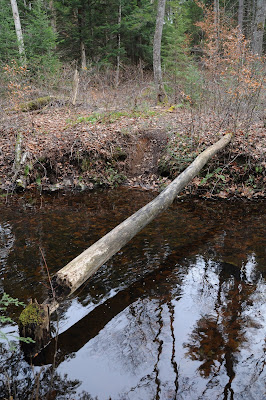 I was impressed, and amused, to see that some time in the past a beaver felled this tree neatly across the stream/brook, creating a nice little bridge. The beavers obviously use this bridge to cross the stream without getting wet (the bark is all worn away by their clawed feet), but as you can see by the eroded trough on the far shore, they also drag stuff down the bank and into the water. 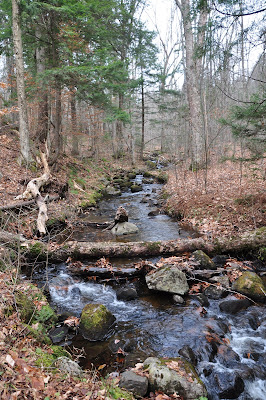 Moving far enough upstream I found a log I could cross to get to the other side; I wasn't really looking forward to bushwacking my way back to the trail through all the witchhobble I'd already come through - the stuff is well-named. 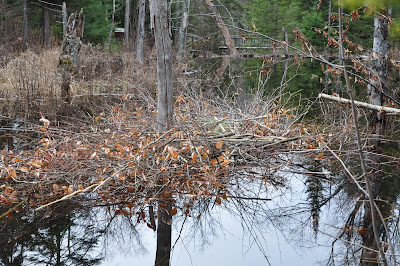 Near the bank lodge was what I suspect is the beavers' larder. A snarl of beech sticks was bunched around the base of a flooded tree. Presumably the pile extends well below the water line, otherwise the beavers will likely be unable to access this food stash once ice and snow fill the pond. 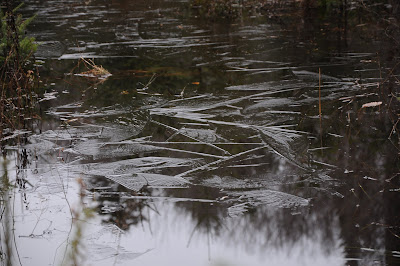 The day seemed fairly mild to me (turns out we had a high of 35*F yesterday), and most of the balls of ice crystals that were scattered on leaves and patches of shady ground earlier in the morning had melted. But here around the pond I not only found unmelted ice pellets, but also graceful ice feathers and fans on a part of the pond the sun hadn't yet reached. These forms always bring to mind the skating frost faeries in Disney's first Fantasia movie.
Posted by Ellen Rathbone at 2:17 PM

Email ThisBlogThis!Share to TwitterShare to FacebookShare to Pinterest
Labels: beaver