I heard a red-winged blackbird calling "conker-REEE" a couple weeks ago, so I wasn't totally surprised to see this lone male at my feeders this morning. He was helping himself to the blackoil sunflower seeds, oblivious to the other greedy visitors who flew in and tried to bully him away. 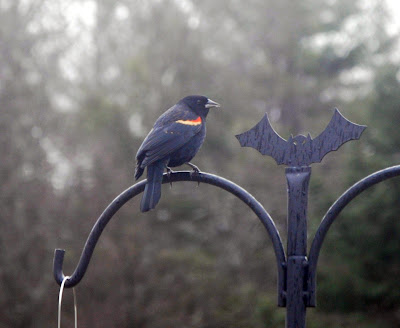 Yes, those bullies were evening grosbeaks. They have been in the neighborhood for a few weeks now, but this is the first I've seen them at the feeders. They even chased the blue jays away - a real feat! If you look closely, you'll also see a brave chickadee and a timid goldfinch in the photo (and the blackbird, clinging to the blue feeder). The goldfinches finally gave up at this feeding station (even though the nyjer feeder was not being used by anyone else) and went to the nearby peanut feeder, where I was unable to photograph them (wrong angle, being so close to the house). 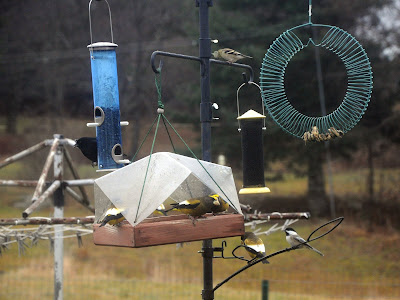 Despite their bullying nature, and their hoover-like feeding habits, I do like evening grosbeaks. They come into their full glorious colors by mid-winter and are such a joy to see at the feeders. Between them and the blue jays, it can be a very colorful sight. Now, if only I could entice our pair of cardinals to come to my feeders...

Although, now that I think of it, I haven't heard the cardinals in quite some time. I wonder if they've finally given up on Newcomb as simply too cold. HM. I thought we had gotten up to two pairs in town, but maybe they've moved on to greener pastures (or maybe our growing feral cat population took 'em out). I'll have to keep an eye and an ear peeled for them.
Posted by Ellen Rathbone at 9:49 AM