If you find yourself walking by a wetland in November, and that wetland happens to have alders (like speckled alder, Alnus rugosa), you are bound to find some that look as though someone has wrapped long-fibered cotton around parts of the stem. I've seen some where these fluffy bands of white were four to six inches long. Very odd. 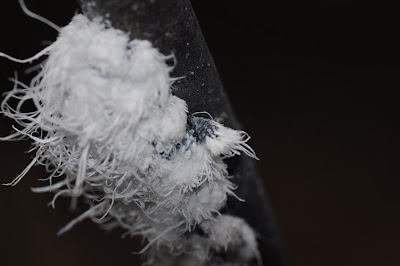 Well, you aren't actually looking at cotton, nor is it some sort of fungus or exudate from the tree. What you have stumbled upon is a colony of Woolly Alder Aphids, Paraprociphilus tesselatus.

Here's a close-up of one of the darlings: 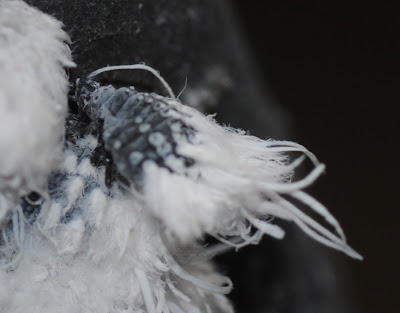 In this very personal shot, the critter definitely looks aphid-like, what with its creepy-looking head and accordion-like body. Bhhhh (shudder) - the stuff of nightmares - it's a good thing they are so small.
The white fluffy stuff is actually a waxy substance that the insect exudes from its abdomen, and it is a defense mechanism. Let's say a ladybug or lacewing comes flying along, thinking it's going to have a nice meal of plump, juicy aphids. A quick grab and the predator is bound to end up with nothing more than a mouthful of waxy fibers. Ick. That's enough to snuff any aphid-craving.
I first encountered WAAs around my second or third fall in the Adirondacks. At that point, all I was seeing was tiny bluish-white fuzzballs drifting about the air. They were easy to intercept with a well-placed hand, and up close they were kind of attractive, in a wispy, pale blue and white sort of way (obviously, up-close in the hand is not the same as up-close and zoomed in with a macro lens). It took another two or three years to get an identification nailed down, and now it seems information about them is everywhere on the internet. I didn't see my first colony until about a year ago, and now I see them with fair regularity.

Like other aphids, WAAs have their ant shepherds, and they (the aphids) suck sap from their host plants. But, from what I've been able to gather, they are not particularly damaging, at least not on a landscape scale. So, if you have some on your alders, I'd say just appreciate them - afterall, if you don't look too closely they are really rather attractive, in a wispy, pale blue and white sort of way.
Posted by Ellen Rathbone at 12:15 PM