It was just too nice a day; I had to go out. And finally there was someone else here to watch the building (I've been on my own for about two weeks). So, I grabbed the camera and took a walk around the Rich Lake Trail. 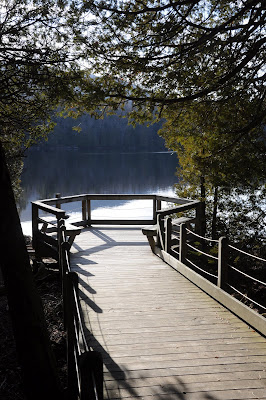 It just beckens you, doesn't it? "Come out and see the lake." 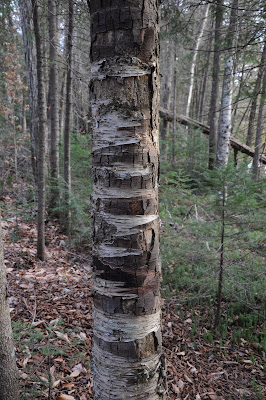 This is not natural bark growth. This is what happens when people yank the bark off birch trees. Birches will naturally shed their bark, and people can harvest it without doing damage to the tree, but most people just grab and pull, exposing the tree to all sorts of damage from insects, fungi and the weather. Do the trees a favor: don't pull off their bark! 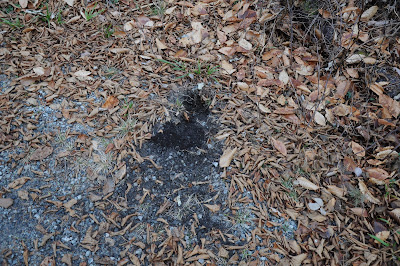 Something was interested in something here. The hole that whatever-it-was dug was big enough to fit both of my fists. If it was a turtle nest, there was no evidence of eggs. 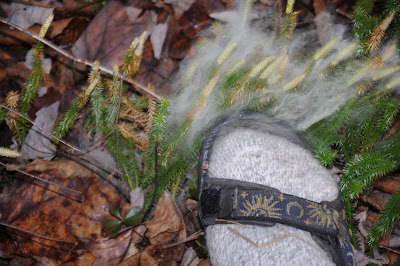 We don't think of fall as the time for pollen and spores, but the clubmosses were releasing spores (with some assistance) in copious quantities. 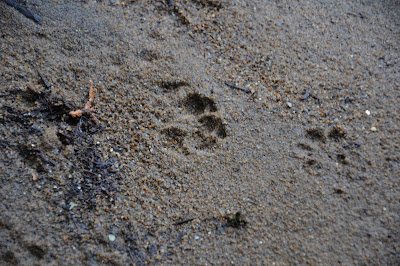 My first thought when I saw these tracks along the water's edge was that they were canid tracks (looking at the one on the left). The four toes are formed exactly like fox/coyote toes. But looking more closely, it looks like there is a fifth toe at the top edge of the track (which is technically the side, but in the photo it's the top). Canids do have dew claws, or a fifth toe, but it rarely if ever shows up in tracks. 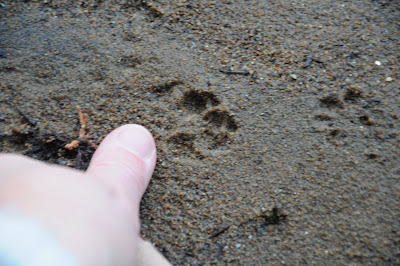 Plus, the track was really really small. It could be a small fox, but that still didn't explain the fifth toe to my satisfaction. Might it be a mink, perhaps? Mink are near the water, and the size is about right (allowing for the wet sand to squish out, making the track look larger than the actual foot). But the shape isn't really mink-shape. I kept looking for other tracks, and I found two more, but they looked just like this one, so they were no help. Maybe there were other clues. 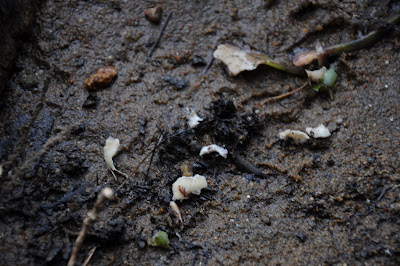 Some further exploration turned up these scattered remains of a meal. At first I thought maybe it was pieces of fish - that could surely be a fin at the top. 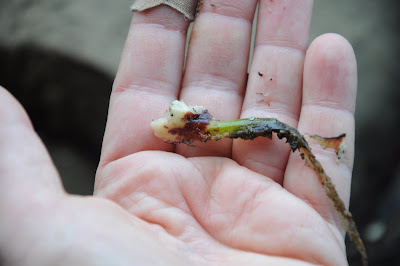 But the "fin" turned out to be a piece of plant, the base of which had been eaten. 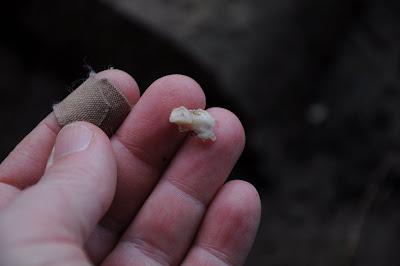 The smaller bits were plant remains, too. Minks don't eat plants, at least not as far as I know. Could it have been a muskrat, then? The mystery remains. 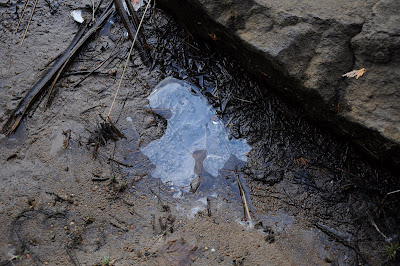 Despite the nearly t-shirt temperatures, there was ice at the edges of the lake. 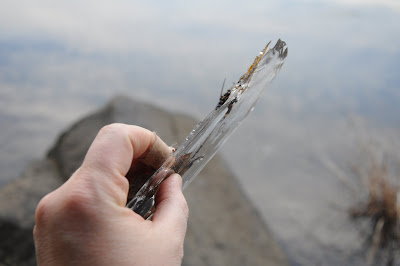 And it wasn't like the ice was china-plate-thin, either. This had a bit of heft to it. 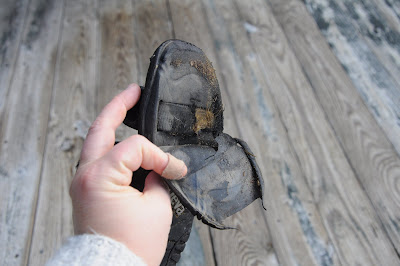 I find it is always best to assess the condition of one's footwear before schlepping along sodden beaches looking for tracks. Especially in late November, when conditions can be chilly. Fortunately for me, it was very mild out, and I was wearing wool socks. 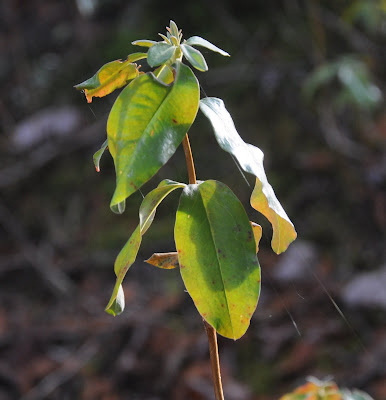 The sheep laurel (Kalmia angustifolia) is still hanging on to its leaves. Note all the little spider silks. In the fall these singular strands of silk are found just about everywhere - in lawns, on trees, on fruits, on leaves...wherever spiders are travelling. We probably see more of them in the fall because now the baby spiderlings have hatched and grown and are dispersing to their own little territories. 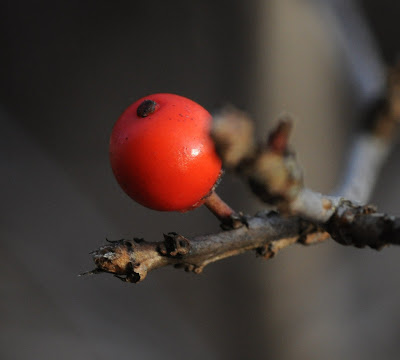 Winterberries (Ilex verticillata) were not too plentiful. Was it a poor year for fruits, or have the birds already started to eat them? Usually birds save these holly fruits for snacking later in winter because they are low in fat and are therefore not the choicest morsels. Inside each little berry (technically a drupe, a fleshy fruit with a hard pit or stone in the center, like a peach) is a "nutlet", which the birds cannot digest. This fits in fine with the holly's reproductive strategy: the birds poop out the nutlets, which are now fertilized and ready to grow if they land in the right location. 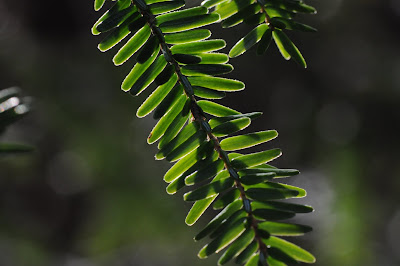 I love backlit leaves! This hemlock was a beautiful model.
Posted by Ellen Rathbone at 3:41 PM