...unless it really is made of cheese, in which case it would be Bleu Moon. :) 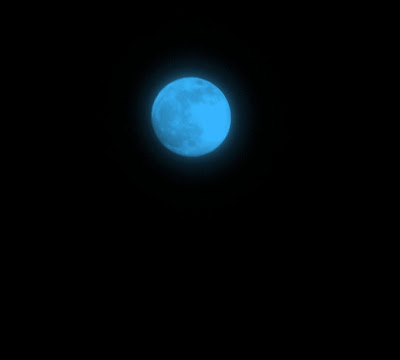 But seriously, folks, tonight is the night we get to experience what has commonly become known as a Blue Moon, the second full moon that occurs in one month. This phenomenon actually happens about every two and a half years (actually, it's closer to every 32 months), so it isn't really all that uncommon.

However, it turns out that what we consider a Blue Moon is not what the originators of the idea of a Blue Moon had in mind. In the earlier part of the 1900s (1932-1957), the Maine Farmer's Almanac came up with the moniker Blue Moon to describe the third moon in a season that had four full moons. Huh? Usually, each season has only three full moons (four seasons, twelve months, equals three months per season, usually with one moon each month). Because the lunar cycle is 28 days, there are always a few days left over each month, so eventually they add up to 28 days and voila, a fourth moon appears during a given season. Rather than call this fourth moon the Blue Moon, though, they decided to give that title to the third moon - I have no idea why.

Anyway, apparently someone wrote an article about the Blue Moon in a 1946 issue of "Sky and Telescope" magazine and misquoted the Almanac, stating that when two moons occur within a single month, the second one is a Blue Moon. This idea stuck - most likely because the error was repeated until it became familiar.

So, if you are a purist, tonight's Blue Moon really isn't, because in fact it is the first full moon of the winter season.

Of course, none of this actually explains why it's called a Blue moon; after all, it's not blue.

The moon only appears blue when atmospheric conditions are right. These conditions involve dust (soot, ash) high in the atmosphere in copious quantities. For example, the last time genuinely blue moons were reported was after Mt. Pinatubo erupted in the Philippines in June 1991. Blue, and even lavender, moons were seen for quite some time around the world.

Tonight, however, folks in Europe, Asia and Africa will get to see a sort of reddish moon, thanks to the partial lunar eclipse that is also occuring. Those of us in North and South America will miss this due to the time the eclipse is occuring. If you want to see it, you'll have to hop on a plane pretty soon and head to the other side of the planet.

And for those who are curious about the photo, I took it last night. It wasn't blue; I played around with the photo this morning before posting. A girl's gotta have a little fun now and then, eh?
Posted by Ellen Rathbone at 9:37 AM