Back in November (the 19th, to be exact), I came across this interesting lichen: 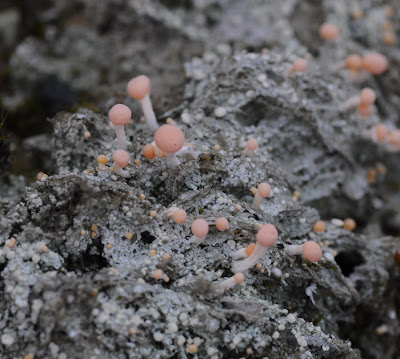 It was nestled among some low blueberry shrubs and assorted "reindeer mosses" along the side of the road. What drew my eye was the lovely pink fruiting bodies. What kind of lichen was it? My Quest had begun.

First, I fired an email off to a friend who seems to know the identity of just about every plant and plant-like organism in the Adirondacks. She had a suggestion, but wasn't 100% sure.


So next I went on-line, and found recommendations for a couple lichen books. A quick trip to Amazon-dot-com and I placed an order for each. 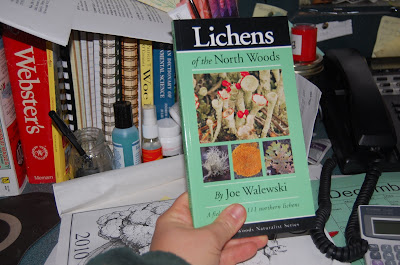 Lichens of the North Woods arrived first. This is a wonderful little pocket volume that covers the most common lichens found in, you guessed it, the north woods. In this case, the north woods specifically refers to the northern ends of Michigan, Wisconsin and Minnesota, and the southern bit of Canada, all surrounding Lake Superior and parts of Lake Huron and Lake Michigan. Since the Adirondacks are very similar to this area, the book applies well here, too. It is part of the same series as the spider book I purchased a year ago (and currently cannot find; I know it's somewhere). Needless to say, this little book will have a permanent place in my Naturalist's Day Pack (which gets heavier and heavier all the time as I add more field guides to its contents).


Still, as wonderful as this book is, it didn't have my little pink friends in it. So, I waited for the second book to arrive, which it did, yesterday: 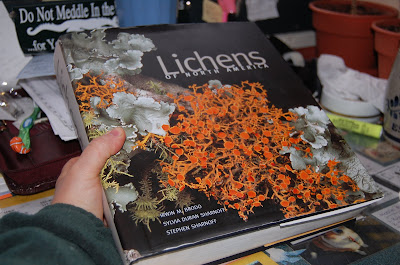 As you can see, Lichens of North America is not really a field guide, unless you plan to hire a Sherpa to schlep it along for you. I don't, so this massive tome will reside in the office, where I can use it for reference.


According to L of NA, there are over 3,600 species of lichens in North America alone. This book may look like all 3,600 are in it, but in fact, it only has photos and ID for about 1500 species. Still, that is nothing to sneeze at, and it is probably the only user-friendly lichen ID volume out there that has as many species as it does.


So, this morning I pulled up the photo of my little pink lichen fruits on the computer and started paging through the photos, looking for a match. I'm not ready to handle the key yet, for it requires a) a good grasp of lichen terminology, b) microscopic evidence in some cases, and c) chemical tests in other cases. Nope, I am too impatient and want to know NOW what my little lichen is.


So, while co-workers are putting the lights and ornaments on our tree in the lobby, I'm sitting here in the dark (I refuse to turn on lights when I have enough light from the window to read by) paging through my new book. And there, on page 299, I saw it: 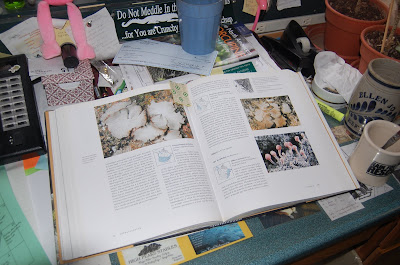 Down there in the lower right-hand side you can see it. "There it is!" I exclaimed to an empty office. I read it's name: Diabaeis baeomyces. Hm. Doesn't exactly roll off the tongue, but because lichens are not really in the limelight when it comes to popularity of ID, most of them do not have common names. My little pink friends, however, do. In layman's terms, they are called Pink Earth Lichens. And here is what L of NA has to say about the Pink Earth Lichen:

* it is a two-part lichen, with a crustose primary thallus (that's the crusty looking bit, kind of grey-white in color), and fruiticose apothecial stalks (the tall, mushroom-like pink bits);

* the photobiont (the alga or cyanobacterium that produces the food for the fungus; the combination of these lifeforms is what makes up a lichen) is Coccomyxa (that's the genus; most photobionts are not yet identified to species);

* it's very common (one always hopes for something rare, but one is usually disappointed);

* it's mostly found on clayey or sandy mineral soils (in my case, sandy), especially in disturbed areas such as roadsides (bingo!)

And that's about it (except for chemical tests, with which I won't bore you because they probably won't mean anything to you unless you are a lichenologist, and if you are, then you probably already have this book and you can look up these data for yourself).

Many lichens are pioneer species, turning bare soil (in this case) or rock faces into friendlier habitats that other plants (or plant-like organisms) can move into. Pioneer lichens manage this by retaining moisture and producing shade. Some lichens are major sources of food for wildlife (reindeer moss is a classic example), while others are edible by people (like rock tripe, but from what I've been able to gather, you'd have to be really desperate to try them - they might keep you alive, but they aren't going to win any taste tests). Still others were used historically for making dyes for wool and other fibers. Today fiber artists in Scandinavia and the British Isles (and probably elsewhere, too) still use lichen-based dyes to create some of the brilliant colors used in their work.

So, was it worth the purchase of these books? Yes; in my humble opinion, you will seldom be wrong in the acquisition of a good book (unless it's a cheesy romance - but then I did say a good book). Although the price of L of NA ranks right up there with college text books, making it one think twice before purchasing it, those of us who've simply gotta' know will find it a welcome addition to their libraries.

Email ThisBlogThis!Share to TwitterShare to FacebookShare to Pinterest
Labels: lichens