A Ramble on the Golf Course

Sunday was a beautiful day, so Toby and I went out for a two hour ramble on the golf course. Often our walks take us on a short route around the upper portions of the course, but today we decided to walk the whole thing (at least until some other folks and their unleashed dogs mobbed us, at which point we headed off into the woods to avoid further encounters). I usually like to walk the perimeter of the course, eyes trained into the woods and wetlands that remain, in search of something unusual that might be lurking just off the beaten path. 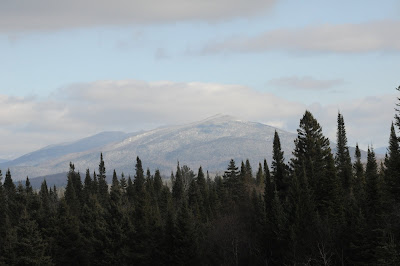 View from the top of the third hole. 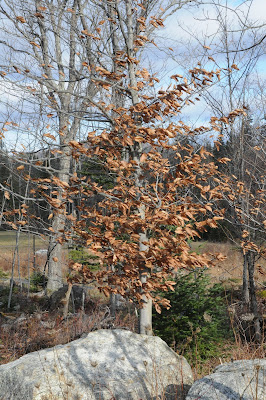 It was actually pretty calm out, windwise, but by the position of the leaves on this beech tree, it is pretty obvious which direction the wind usually blows. 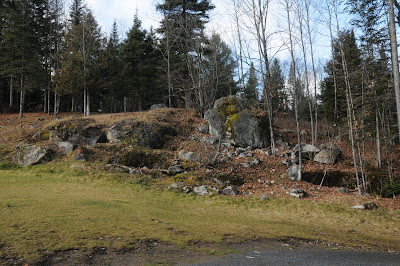 This lovely outcropping of rocks is located at the base of the second hole. During the summer it becomes quite overgrown with vegetation (until the staff weedwack it), but with the barren days of November upon us, it was a perfect time to go exploring to see what calls this place home. 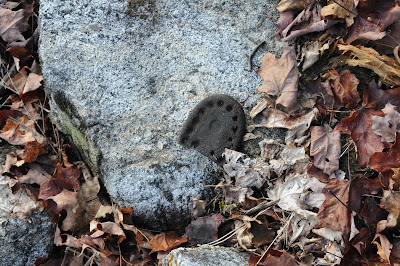 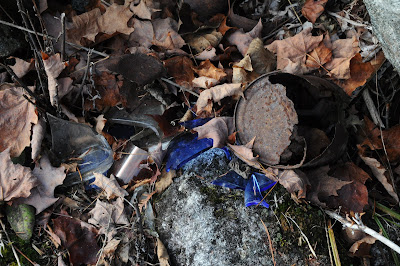 Litter was prominent. When the golf course was under construction, much of this area was littered with the debris of past generations: old pots, old farm equipment, old 50-gallon drums. As harsh as the climate is in Newcomb, there used to be a fair amount of farming here way back when. Obviously, this was necessary for the early settlers, since they couldn't just bop over to North Creek (25 miles away) to get groceries: if they wanted to eat, they had to produce the food themselves. Some of the old "litter" is interesting, a peek into the past. Modern litter, however, is a little more disappointing to see. 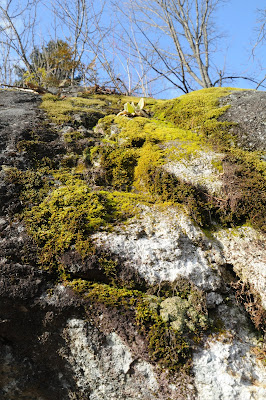 Looking straight up the side of the largest boulder. Is this a glacial erratic (a rock brought from somewhere else by the glaciers and dumped when they melted), or merely a broken off chunk of the local exposed rock? Whatever its provenance, it is now home to many growing things: mosses, lichens, ferns, small trees, herbaceous plants, et al. This delightful moss covered the greatest portion of the boulder. I believe it's Hedwigia ciliata, a fairly common rock moss. Like many mosses, this one has no common name. 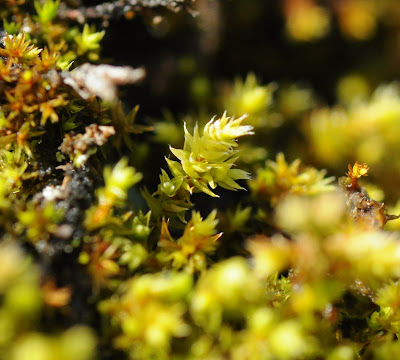 A real close up look at the leaves shows that they have white tips. This is a good diagnostic for this species. 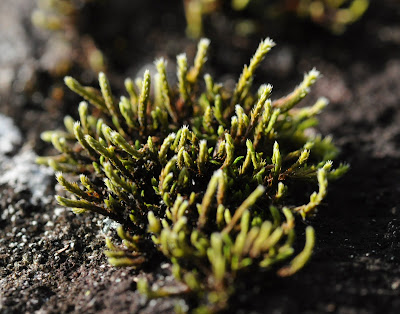 Hedwigia, is capable of survival in more exposed areas than most mosses. When things get dry, the leaves shrink up and pull in close to the stem, reducing further moisture loss. As with many mosses, the addition of a little water reconstitutes the plant into its lovely yellow-green lushness. 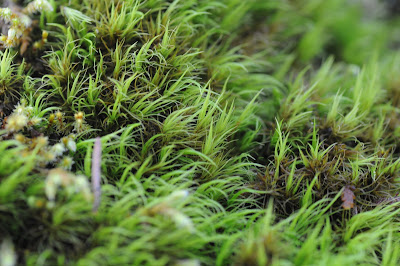 This moss might be a Dicranum. Dicranum scoparium, aka Broom Moss, is a fairly common species, found on dry-ish forest slopes and in moist habitats near woodland streams. It seems to like a variety of substrates: soil, rocks, rotted woods. One of the characteristics of broom moss is its windswept appearance. 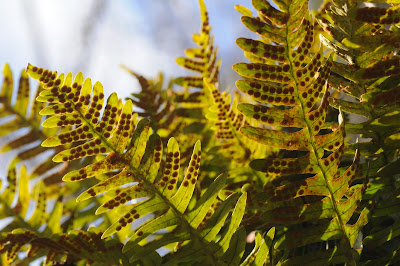 Common Polypody, Polypody virginianum, is, as the name suggests, a pretty common fern and is often found on top of rocks (the ferns in this genus are appropriately referred to as Rock Cap Ferns). The smooth, rounded leaflets, and the obvious sori, make this fern pretty easy to identify. Apparently, at one point in time (pre-1753) only one member of this group of ferns was referred to as polypodium, which is a Greek word meaning "many feet" and was used to refer to the branching of the rootstock. Carolus Linnaeus, however, came along in 1753 and decided to use the name to refer to the whole genus. 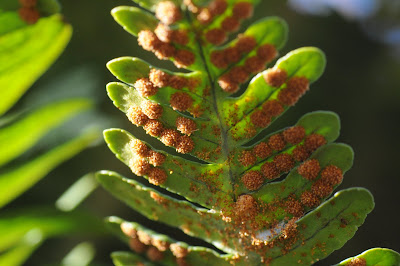 The sori, or little spore packets, on the back of the polypody show where some either erupted or were torn apart by some outside force. In some places this fern is called Golden Polypody, which reflects the color of the sori rather than the color of the plant itself. 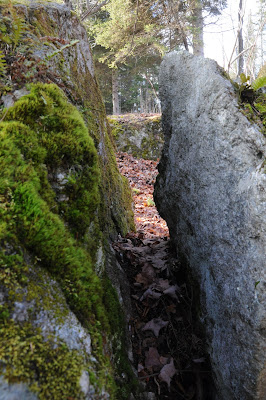 Time and water eventually exhaust the strength of even the mightiest rocks. Many large boulders around the Park show vertical splits, where the elements have wreaked their havoc upon the stony surfaces. In geologic time, this rock will likely become a pile of soil, hosting a variety of new vegetation. 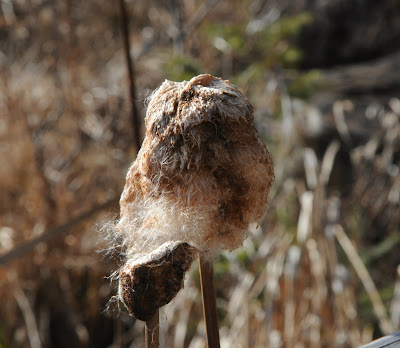 Many of the cattails in the remnant wetlands look to me like marshmallows that have been slowing melting over the warm coals of a campfire. 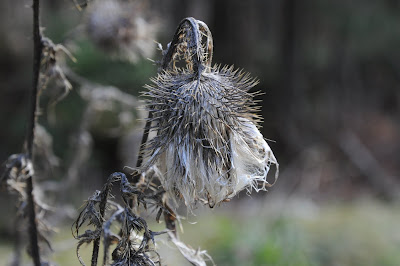 I've always thought that these large, single-flowered thistles were bull thistles (Circium vulgare), but it turns out that there are other species of thistles that also meet this definition: field thistles (C. discolor), pasture thistles (C. pumilum), and swamp thistles (C. muticum). So, next summer I will have to take the field guide out and peer closely at the leaves and stems of these plants to determine which we have and where. 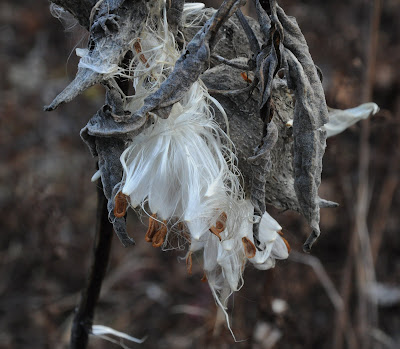 Many of our milkweed plants never had the chance to send their seeds out into the world this year. First, it seems their ripening was delayed; I saw milkweed fluffs blowing around south of us much of the fall, but ours weren't even splitting yet. When they finally did, the rains arrived and many merely ended up matted masses, barely emerged from the pods. Once they reach this state, the ends of the parachutes are snarled together and they will never float on the wind. It's kind of sad. 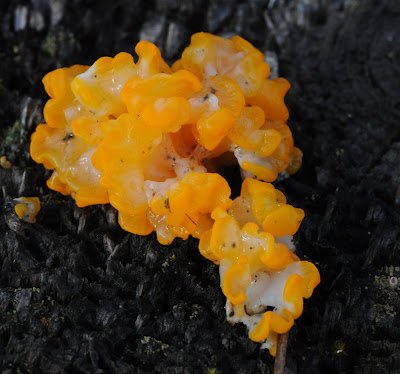 I saw two clumps of this spectacular orange jelly (Dacrymyces palmatus) on my ramble. Another common and widespread species, it grows on dead conifer logs and stumps. Both clumps I found were on stumps. It looks to me kind of like loosely scrambled eggs, where the whites and yolks are not completely mixed. Of course, these would be eggs from the local chickens, not the store (which are pale, anemic-looking by comparison).
Give me a fresh, local egg any day! 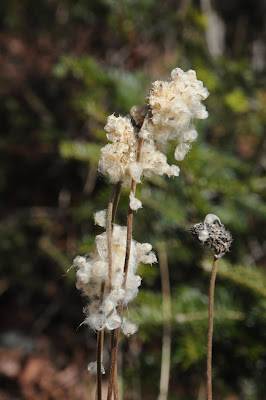 I am not 100 percent sure what this gone-to-seed plant is, but if I had to guess, I'd say a goldenrod. I saw several of these, and on all the wispy silks of the seed parachutes were pretty snarled with each other, preventing the escape of the seeds (much like the milkweeds above). 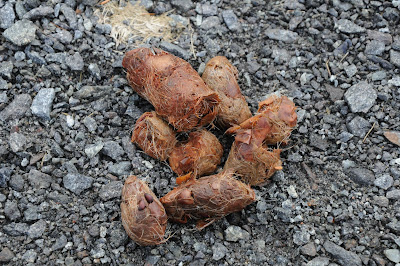 Ah - scats! No ramble is complete without at least one pile. My first thought when I saw this specimen was bear, because of the apples, but the hair suggests it might be coyote instead, although bears will eat other animals and carrion. By now most bears should be hunkered down for the winter, but since the days remain fairly mild and snow is not covering anything, bears are still out and about foraging. Size wasn't much help in determining whodunnit - could be large coyote or small bear. The slightly tapered ends on some of the segments, however, suggest to me it is more likely to be coyote scat.