Life is skittles and life is beer... (a little something for all you Tom Lehrer fans)

But seriously, look what I found in the yard today: 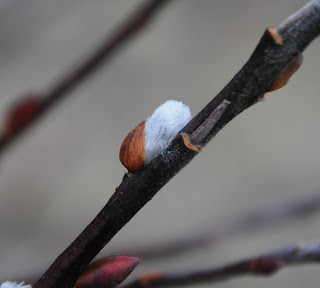 And as if that weren't bad enough, I also found this: 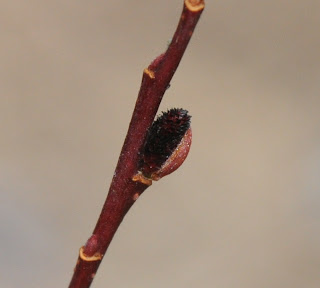 Both, of course, are pussy willow catkins, in the fuzzy stage we usually see in April or May. The first is from my giant pussy willow, and it has over a dozen "kittens" already emerged along its branches. The second is from my black pussy willow, and while it has fewer fully emerged "kittens", there were plenty just starting to break through their buds.

On a cheerier note, however, I finally found some evidence that the Wildlife Crabapple that I planted a couple years ago is indeed of benefit to the wildlife: 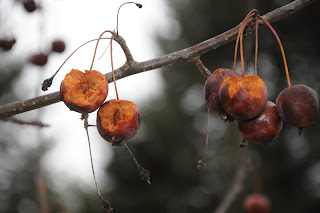 I wonder if the birds only became aware of it after I put out the birdseed and they started spending time in the yard. Or maybe they were simply waiting for the apples to reach a particular stage of ripeness. Hm.

Crabapples, in case you didn't know, are the original apple, or at least they were in Europe. As I recall, apples (as we think of them today) originated in the mountains of Kazakstan, and it was about 10,000 years ago that they became popular with traders and military personnel and started to make their way around the world. (Meanwhile, North America was still recovering from being over-run with glaciers.)

For an in-depth history of the apple, written rather delightfully, hop on over to this website.

Posted by Ellen Rathbone at 9:23 AM

Email ThisBlogThis!Share to TwitterShare to FacebookShare to Pinterest
Labels: seasons