The evening grosbeaks were here in droves this morning, calling from the tree tops in that finchy way they have. I filled and hung the feeders and went about the business of opening the building for the day. Then I grabbed the camera and tried to get some pics.

Grosbeaks are not brave birds.
I took several shots through the windows, but they just don't come out well, y'know. 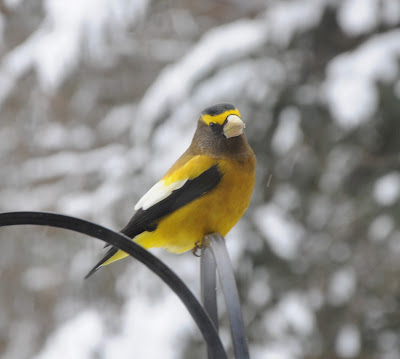 Aren't they just about the handsomest birds you've seen?
So I grabbed a cup of seed and went out on the deck, sprinkling seed on the railings. Of course, all the birds took off.

Chickadees and nuthatches are brave, though, so it was only a matter of a minute or two before they came back, bringing a few goldfinches with them. One little chickadee looks to be in pretty bad shape. It kind of reminds me of a chicken that's been picked on by the other chickens - henpecked. 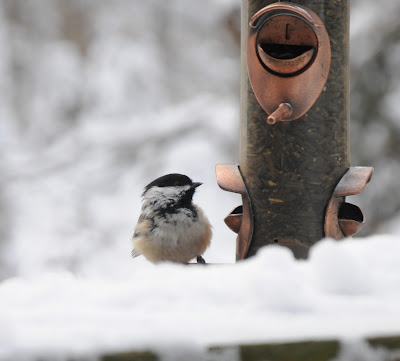 I wonder if his feathers will protect him enough through these subzero days/nights we are having.

The grosbeaks, however, stayed in the trees. After ten minutes or so (I'm standing out there sans coat, hat, mittens...waiting...at about 4*F), they drifted down to the lower branches, but just wouldn't come feed. They so obviously wanted all that seed I put out, but not one was brave enough to get it.
Finally, as I was getting ready to call it quits, a couple took the plunge, but only to the seed farthest away from me. 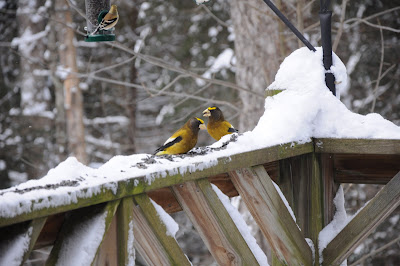 I still didn't get any really good shots, though. BUT! I'll accept this as a challenge.

I did finally get a couple fair photos of a white-breasted nuthatch, which has been on my list, so it wasn't a total loss. 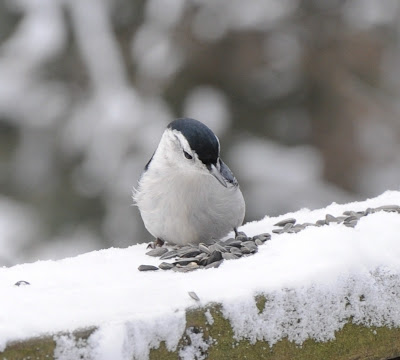 Posted by Ellen Rathbone at 9:59 AM