Some Snow at Last

After moaning about the lack of snow on Saturday, we woke to a white world on Sunday. It wasn't a lot of snow, but enough to make things white. The sun was out and the wind still, so Toby and I took a nice long walk down to the river. Along the way we found some great tracks. 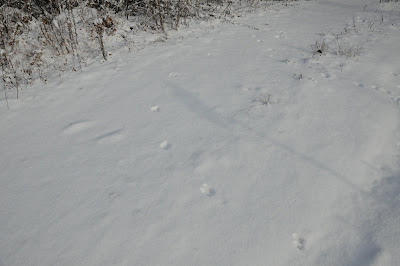 Based on the size of the footprints, and the fact that they are pretty common around here, I'm pretty confident these are long-tailed weasel tracks. 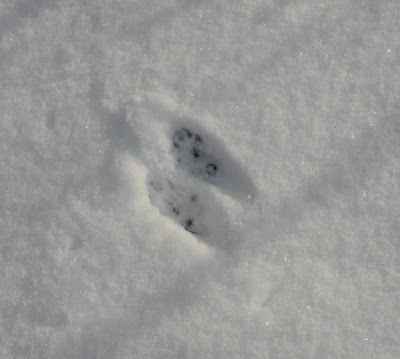 What did the weasel find? Or were there two weasels? Hard to say.

Did the weasel meet a hare on this snowy driveway? Odds are, they passed this spot at different times. Had they actually met, I'm sure the tracks would show the encounter. 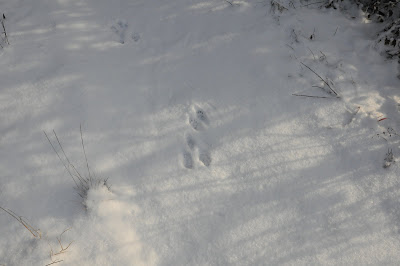 The hare continued down the road, leaving some splendid tracks in its wake. Toby, of course, had to sniff the them: 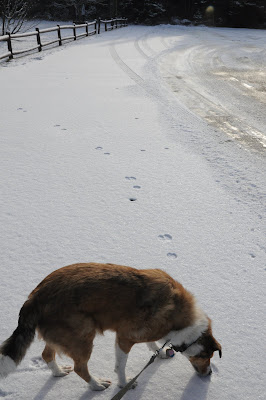 For some reason, the hare did a quick turn. It was hopping along and suddenly made a sharp left: 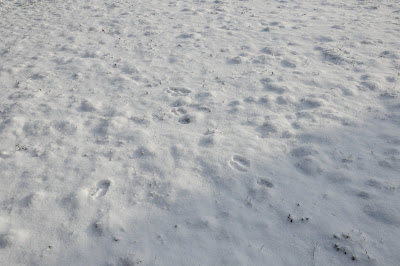 I looked around to see where the hare had gone. Very faint, in the brush, there is a trail. Can you see it? This must be the hare's highway...or back road. 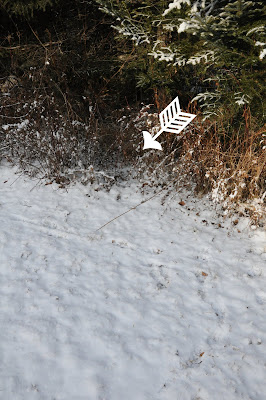 Canid tracks were prominent at the dead end of the road. I couldn't tell if there was just one animal or a group, and with the dog in tow, I couldn't investigate thoroughly. The tracks weren't terribly large, which would suggest fox (and foxes don't travel in packs), but if they were fox, then the animal was pretty good-sized. They could be from a small coyote, but most of the coyotes I've seen around here are bigger than Toby. I'll have to remember to bring my ruler in the future - sometimes measuring is the only way to know for sure. In the end, I found myself leaning towards fox. 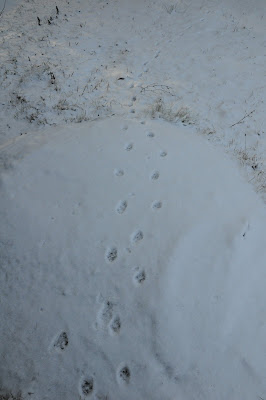 The canid came along and did a little dance here. My first thought was that maybe it smelled something and was sniffing the ground, shifting its feet as it did so. My second thought was maybe it stopped to mark the spot (pee on it), but there was no evidence of yellow snow, and the tracks don't quite measure up the positioning dogs usually use when doing this. 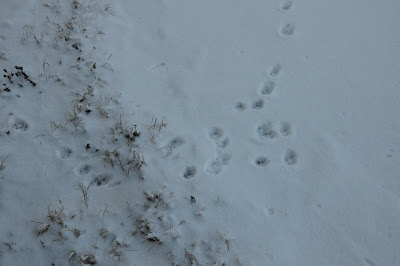 These tracks show where our canid shifted gears. It was trotting down the road (you'll have to take my word for that), changed into a lope (the middle set of tracks in the photo; in horse lingo, a lope is a canter), and ended up in a gallop (the lower set of tracks): 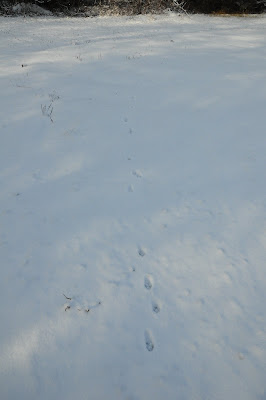 Following the tracks back up their trail, I saw something odd. Our canine came trotting down the road and suddenly did something that left these triplet tracks: 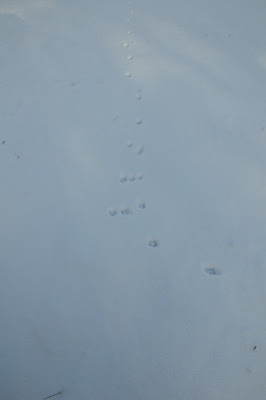 Here they are close up. I am totally flummoxed. If anyone has an idea of what this animal was doing, please drop me a note! 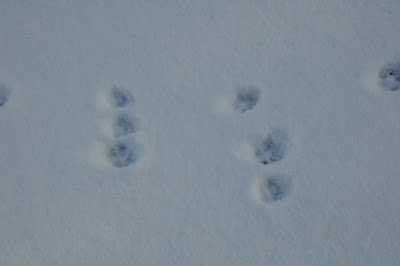 After we had our fill looking at the tracks, and figuring out who did what, we headed home, where I made an apple pie for a potluck on Monday. 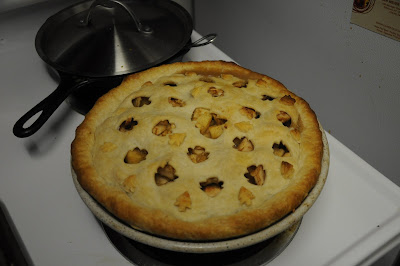 As Calvin of "Calvin and Hobbs" fame said: the days are just packed.
Posted by Ellen Rathbone at 10:27 AM