A Dusting of Snow Reveals All

It doesn't take much snow to make a tracker happy. In fact, a dusting of snow is usually better than a foot of snow, for the tracks are laid out in perfect detail, whereas with a foot or more of snow all you are likely to see is a hole where the animal's foot sank into the white powder.
So, here we have this morning's find on the back deck at work. In this first photo, you see the classic pattern of this animal: the hind foot placed next to the front foot. 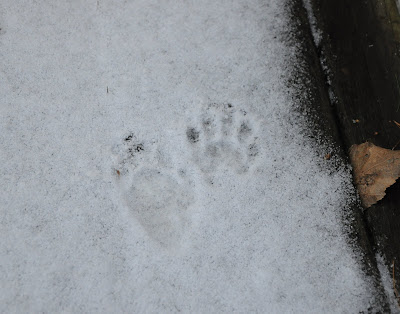 Can you count the toes? Five on the front, five on the back. The hind foot is larger than the front (which indicates that the nether region of this animal is heavier than the front), and the tracks look uncannily like human handprints. Have you guessed it yet? 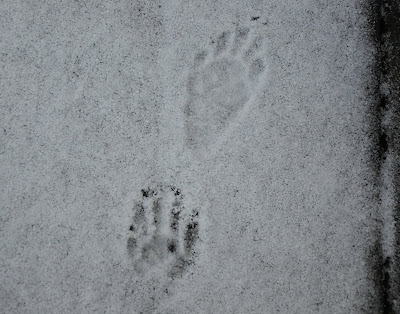 This animal is a good climber and agile on the railing: 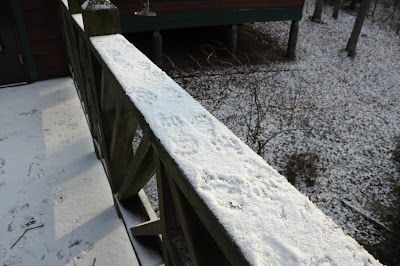 Here we see that this animal made the rounds on the deck, leaving full sets of great prints. If you look closely, you'll see the smaller tracks of a second mammal, the giant tracks of a third mammal, and the small paired tracks of a fourth animal, the latter non-mammalian. Can you name them all? 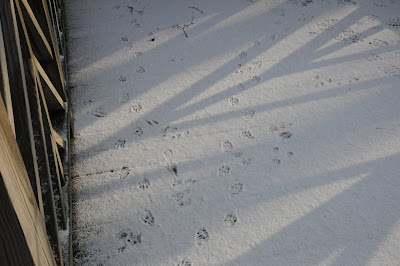 Here are the answers (don't cheat and look ahead): 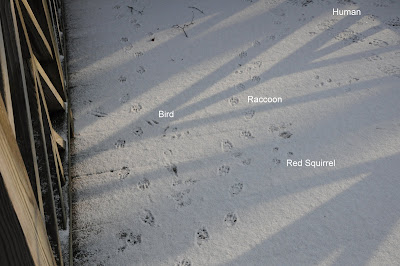 I had high hopes of getting out on the trails today. As you can see the sun is out, and with just a trace of snow, I was anticipating all sorts of potential tracks and such. But, one co-worker called in sick, and the other had a plumbing emergency. Translation, I'm stuck inside. Ah, the travails of having a small staff. I guess I will have to settle for reading my new books: Lichens of the North Woods, and The North American Porcupine.
Posted by Ellen Rathbone at 11:16 AM