It's been a while since I've taken my camera for a walk here at home, so yesterday evening I put the leash around the dog's neck, the camera around my neck, and off we went.

With the summer drawing to a close, more rapidly than I expected, I didn't expect to find too much to photograph. But, the sun was at that lovely evening angle, so even things I'd already photographed might still make for some good shots.

Viper's bugloss is still, amazingly, blooming. The flowers are not as robust as they were earlier, but, the blue-pink color remains pleasaing to the eye. 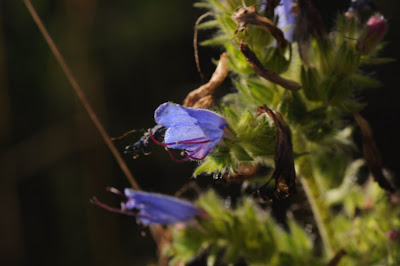 'Tis the season for pearly everlasting (Anaphalis margaritacea). (I hate photographing white subjects - they are always washed out! The strong wind didn't help any, either.) 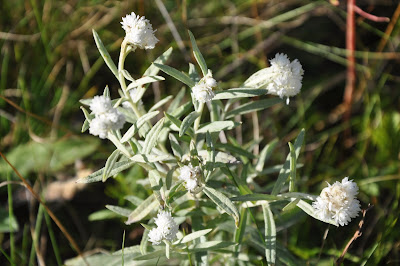 Up close, these flowers look a lot like strawflowers, those perennial favorites of dried flower arrangements. Perhaps this is why they are called everlasting? I'll do some research into this and will write it up for tomorrow's Adirondack Almanack article. 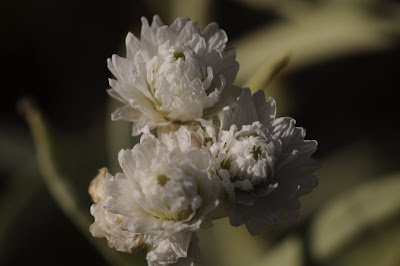 I was delighted to find sneezeweed (Helenium nudiflorum) along the roadside. It turns out that there are several species of sneezeweed, and this one, the purple-headed, stands out from the rest of crowd because the center of the flower is brown (the books say "purple," but don't you believe it). 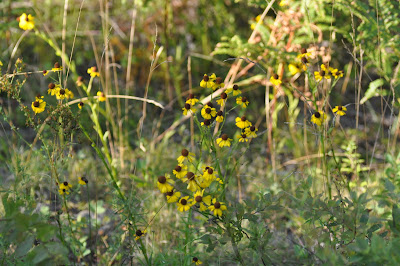 Way back when I started off in my career as an interpretive naturalist, I was told that sneezeweed got its name because it looked like someone had sneezed on it, blowing the petals backwards. Works for me. But recently I read that the leaves used to be used for snuff. It turns out that a different sneezeweed (H. autumnale) was indeed used to induce sneezing - both the dried leaves as well as the dried flowers. This is recorded in Moerman's Native American Ethnobotay. I like the earlier explanation - it has a feel of whimsy to it.
Sneezeweed, it seems, is actually a rather toxic plant - especially to herbivorous mammals, like cattle and such. Not a plant to have in one's pastures. Still, sneezeweeds are native wildflowers (hurrah), although the purple-headed sneezeweed righfully belongs in the southeastern United States. 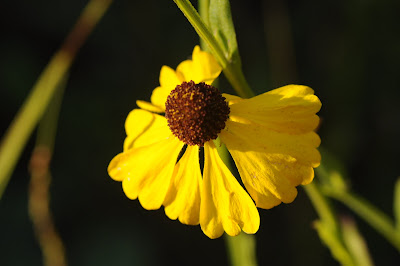 The cherries have ripened and by now have mostly been consumed by assorted birds and mammals. Next on the list are the dogwoods. Here we have some dogwood berries all nice and plump but not yet ripe. 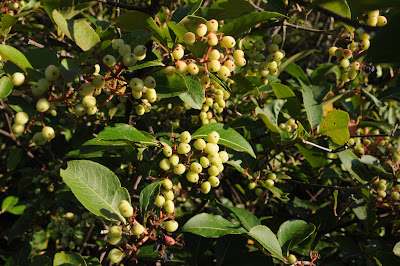 I was hoping to photograph some bunchberry fruits, too, but it seems that the critters have also eaten these, for I could not find a one during last night's walk.
More rain is predicted, so it may be another while before the camera goes for a walk again. Maybe I can sneak out on the trails at work - the baneberry plants are loaded with their doll's eyes fruit - always fun to photograph.
Posted by Ellen Rathbone at 12:01 PM