The bottom of the key card below says it all: 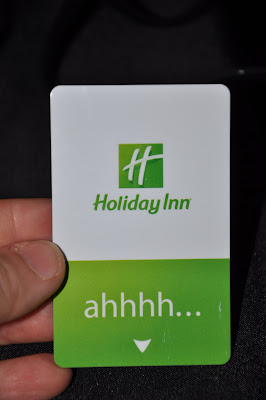 I've been on the road since 9:00 this morning, driving to a job interview in Maine. MapQuest declared it was upwards of a seven hour drive from Newcomb to Augusta. Guess what - they are wrong! Let's see... 9-10-11-12-1-2-3-4-5-6 - that's 9 hours and I'm still an hour away. HM...methinks MapQuest should actually send out staff to drive these routes. Okay, take off an hour for all the stops I made to stretch my legs and get maps and a lunch, but still, it's a far cry from 7 hours. I think we have to give them some slack, though, because in Vermont the speed limit varies from 40 to 50 MPH on most of the main roads; MapQuest probably doesn't consider that.

Still, regardless of driving time, here I am in Maine! 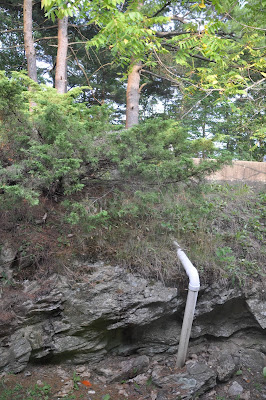 That's the view out the window of my hotel room. I wonder what that pipe is for...

That's the only photo I have of Maine yet, though - sorry. Most of my driving has been on major highways, which a) are not really conducive to taking photographs, and b) are not terribly photogenic.

I did take some shots at Lake Champlain, though. Here we are at the former sight of the Crown Point Bridge (at about 10:30 AM). 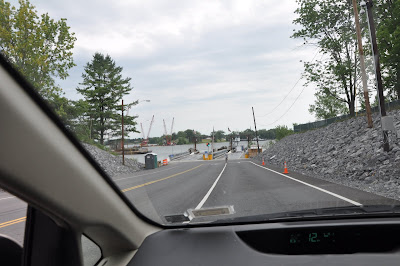 Obviously, there is no bridge there now - they blew it up this last winter after it was deemed unsafe for travel. Hundreds of people flocked to the bridge the day of the demolition, only to be disappointed when gale-force winds blew up near-blizzard conditions. Between the blowing snow and the fog, there wasn't much to see. One moment the bridge was there, and then >poof< onblur="try {parent.deselectBloggerImageGracefully();} catch(e) {}" href="http://4.bp.blogspot.com/_eOHKzNaOcRI/TF8wg5mfanI/AAAAAAAAEh4/5ikcZIxEhOA/s1600/20100808_2.JPG"> 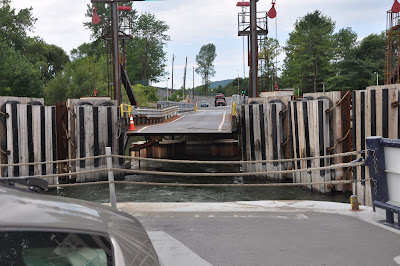 There was a sign as one approaches the ferry that said "Bridge Construction to begin August 10." Wow - that's in two days. Looking out into the lake, it looks like they are ready to go! 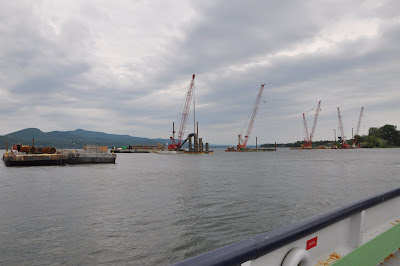 I know this looks like the same shot, but in this photo you can see the other ferry (middle right) just as it is leaving its dock to come back to the NY side of the lake. I couldn't believe how short the distance was. Somehow, it seemed a lot further away when I drove across on the bridge! 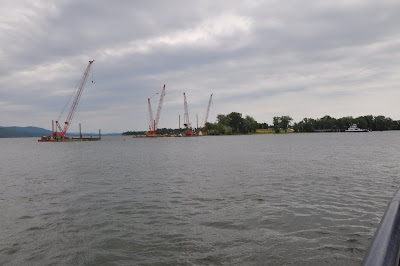 This next shot is kind of interesting - past and present colliding. In the foreground you see all the construction equipment for the new super modern bridge. In the background, on the grassy knoll, you see stone walls - part of all that remains of the fort at Crown Point.

This fort was built originally by the French in the 1730s, back when they thought they ruled this part of the world. Twice the British tried to take it over during the French and Indian Wars. The French finally blew it up in 1759 so the British couldn't have it.

The British promptly rebuilt it.

Then the American Revolution came along, and the British only kept a handful of soldiers on at the fort, which meant that when push came to shove, they lost it pretty handily to about 100 militiamen (the Green Mountain Boys) in 1775.

There's a lot of history here, including Benedict Arnold (when he was still on the Colonies' side). If you are a history buff, then this should be a place for you to visit some time. Unlike Fort Ticonderoga, which is a private outfit and all restored, with re-enactors and all that, Crown Point is a grassy expanse (lots of hills) filled with all sorts of ruins. There may even be ghosts there for all I know! 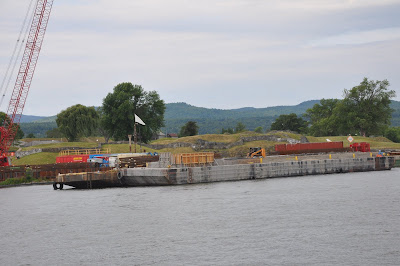 Anyway, here's the other ferry, headed back to NY. The ferries run 24 hours a day. Must be a bit of a drag for the operators, but it sure is a boon to us travelers! 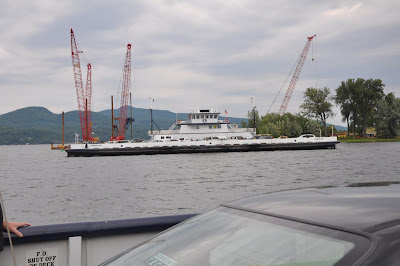 Here's another historic structure on the NY side of the lake. This is the Crown Point Lighthouse. Pretty interesting structure, isn't it? I've never visited it, but it looks like you can climb up to the top (see the people?).

Apparently the first structure here was a windmill, which the French blew up in 1759 along with the fort. They were thorough, it seems. It wasn't until about a hundred years later, when things had calmed down a bit, that the need for a lighthouse at this location was broached by those in the maritime commerce business. Lake Champlain is a VERY LARGE lake - vying with the Great Lakes in size. In fact, I believe it is considered the 6th Great Lake, at least unofficially.

One of the famous parts of this lighthouse is a genuine Rodin sculpture. A bronze thing. Last year the lighthouse (with the Rodin) was reopened after restoration. It's kind of cool that an original Rodin is sitting out there for the viewing pleasure of people in a campground! 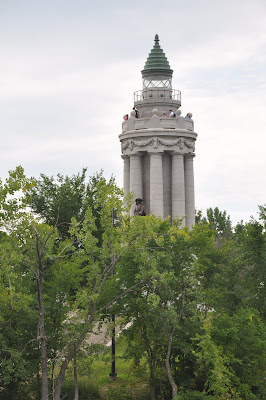 Okay, I admit I did take one photo while on the highway. I think this is in Maine, although I could've still been in New Hampshire. Anyway, this car was just the weirdest looking thing. It's called, get this, the Cube. The CUBE! And it is! You thought those refrigerator boxes on wheels (Kias, I think) were strange? Well, they are naught compared to this thing. Check out that rear window - it wraps around the right corner of the vehicle! 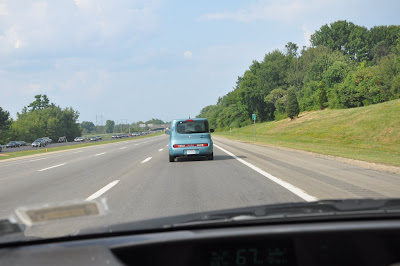 So there you have it. My trip to Maine so far. I am staying the night in Bath, which is along the coast. The plan is to get up early and head to Cook's Cove (or was it Cook's Corner?) and drive out one of the fingers of land that stretch out into the ocean. I want to see the coast and take in a tide pool or two before my interview. I don't have to be there until 3:00, so I have a little time to sight-see. Then it's interview time, followed by the ten-hour drive back to Newcomb. It's gonna be a looong day tomorrow. I'd better get some sleep.
Posted by Ellen Rathbone at 6:29 PM

Email ThisBlogThis!Share to TwitterShare to FacebookShare to Pinterest
Labels: travel