Walking the Other Way

It was downright freezing in the building this morning. A cup of cocoa and a cup of tea did nothing to warm me up. And yet, visitors were coming in all sweaty - it had to be warmer outside. So, out I went.


Several times this week the lack of blue jays has come up in conversation. They were like fleas on a dog earlier in the summer, but for the last few weeks, no one seems to have seen or heard a one. Until this morning - I heard them around the building and again out on the trails, where I also found this feather. So, they are around...they are just hiding. 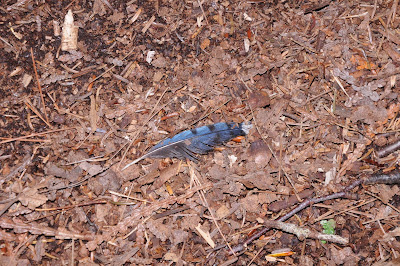 These white mushrooms were quite plentiful along the one side of the Sucker Brook Trail. I'm pretty confident they are an amanita, but which one I don't know. Possibly A. bisporigera? Whatever species they are, amanitas are all deadly poisonous. 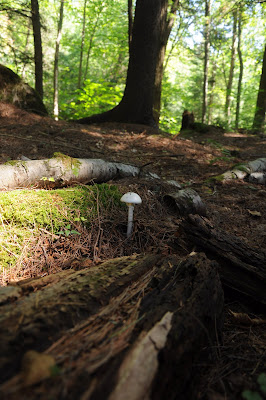 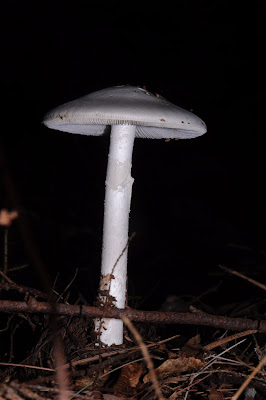 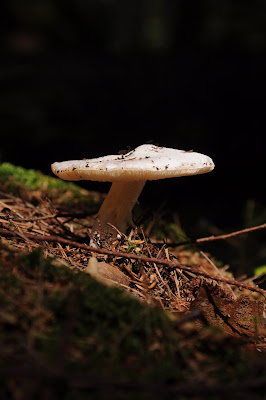 It turned out to be quite the fungusy day. These little ones were all crowded against a rock in the trail. 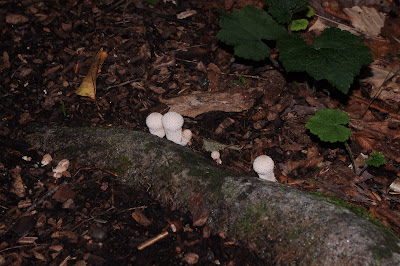 How beautiful these fungi were, all covered with large dewdrops, glistening in the sun. 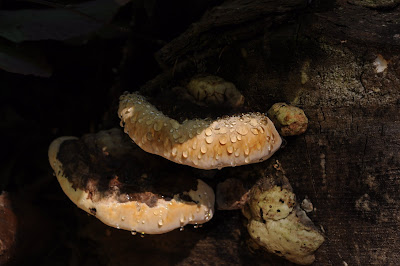 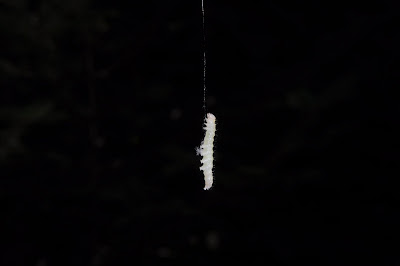 A year and a half ago I was flummoxed by some strange growths on the trunk of this birch tree. The are apparently caused by a fungus, Inontus obliquus. You can read about this tree here. 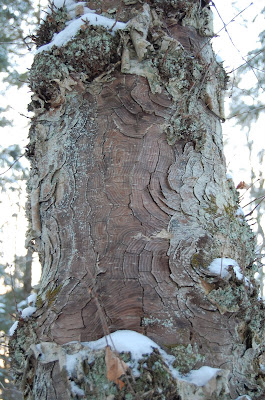 Today when I walked by the same tree, each of those strange growths on the trunk had sprouted twigs. You can see the dormant twigs on the growths above. 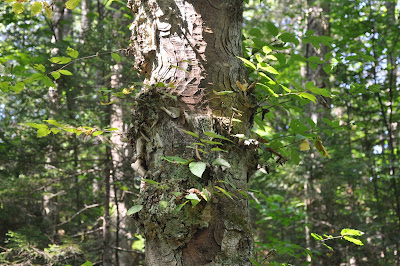 Typically, witch hobble leaves turn a kind of burgandy color at the end of the summer: 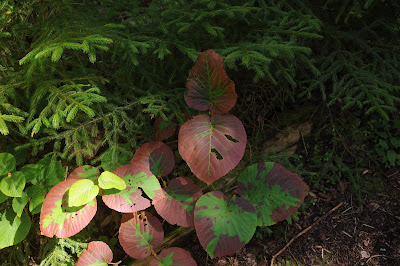 But I found these lovely red ones... 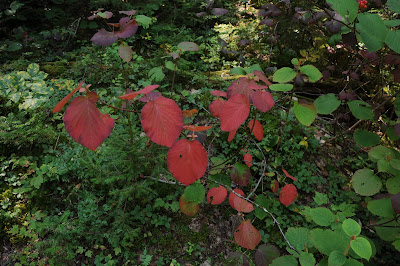 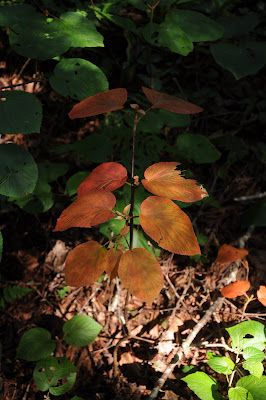 Hooray! Scat! This was deposited on a small mound in the trail. Probably coyote, since I think it was too large for a fox. (Wait 'til I get a photo of the monsterous bear scat I saw last night!) 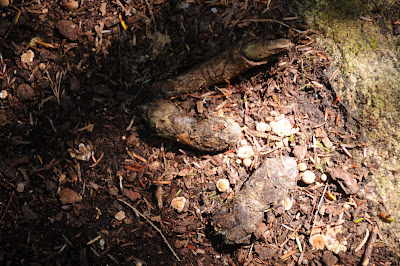 These small purple "flowers" caught my eye. Each is less than an inch long, but their purple color stood out. What could it be? I immediately ran through the list of saprophytes I have seen: Indian pipes, beech drops, squawroot, putty root. Hm. I was leaning toward beechdrops, except there were no beeches growing in this part of the woods. Beechdrops (Epifagus virginiana) are parasites on the roots of beeches. I looked all around - sugar maples and a couple black cherries. No beeches. Could there be old, decaying beech roots underground in this spot? 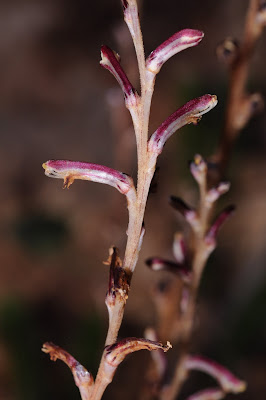 As a whole, the "plant" isn't very attractive. It looks kind of like a dead twig. 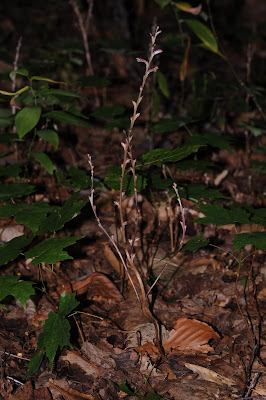 The buds were very pretty, too. Who knew a parasite could be so lovely? 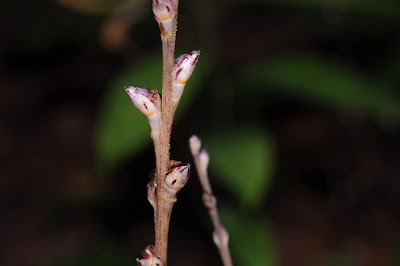 Here's a head-on view. It looks almost like it's been dipped in sugar. 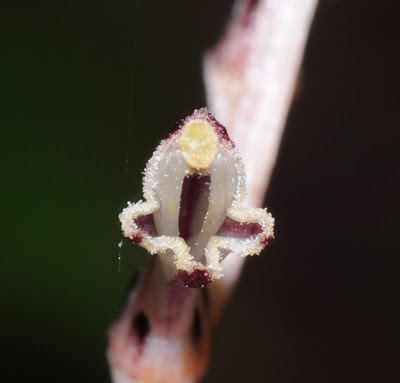 I think this is the only time I've actually seen the fruit of the Indian cucumber root, and there's only one left. 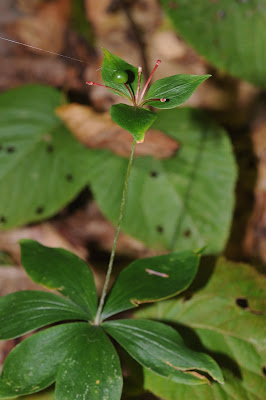 Sure wish I knew what kind of mushroom this is! I was thinking Chicken of the Woods, but I don't think so. Any 'shroom experts out there, feel free to chime in. I had no luck with my mushroom book. It's pretty big - like, the size of my head. 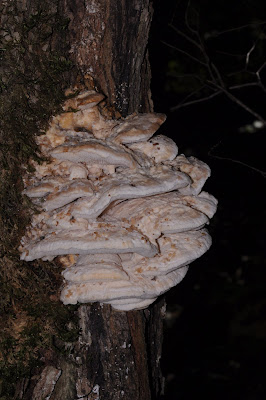 The underside of this mushroom was very toothy, and a perfect candidate for a tripod. I'll come back with one sometime and try to get a better shot of the teeth. 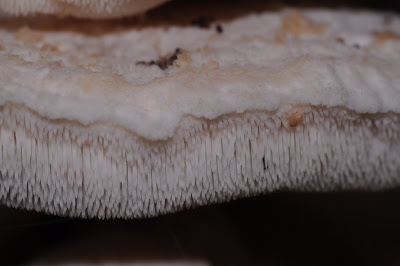 Isn't this great? Here we have a witch hobble leaf in the process of emerging! So much for these being strictly next year's buds. 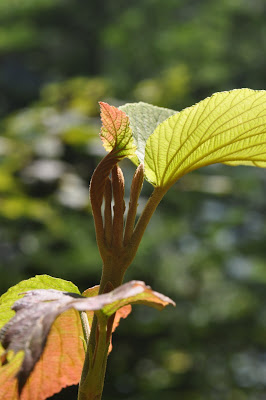 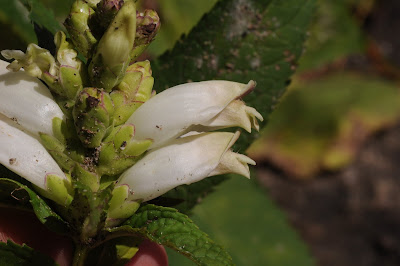 Here we have a Solomon's plume in fruit. It's hanging upside-down with dead leaves because the plant was snapped in two. 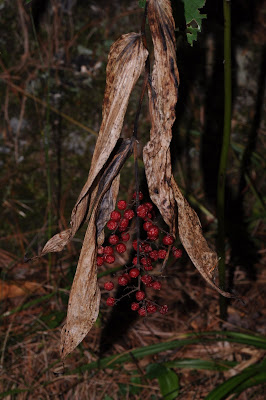 These were the only two dragonflies I could photograph. There were plenty of others out, but as they flew by, I could swear I heard them give me raspberries and taunt: nya-nya nya-nya nya nyaa!

I believe these are both yellowlegged meadowhawks, a female and male, respectively. 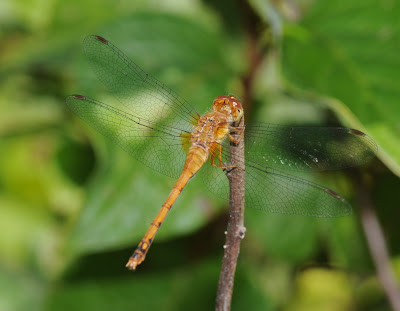 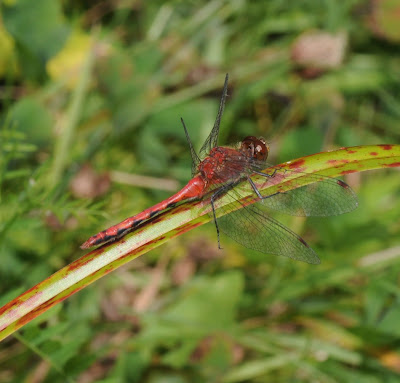 Turkeys! With the macro lens, this was the best I could do. Aren't the poults just so dinosaurish at this age? It's not only humans that make awkward teens. 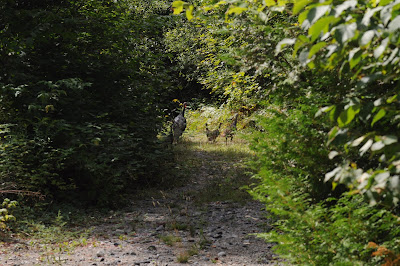 A face only a mother could love? Can you imagine this fly 100 times larger than this? The stuff of nightmares! Check out the white claws on the feet, and those spines on the back. > 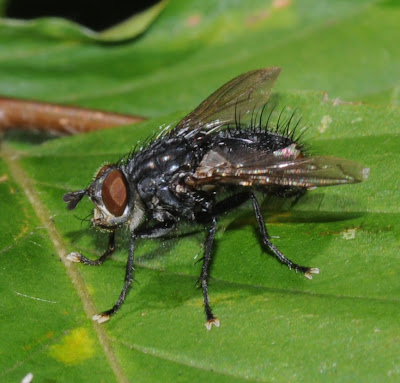 Posted by Ellen Rathbone at 2:10 PM