Walking in the Clouds

What a night. I think I'm working on about three hours of sleep. It hasn't hit me yet, but there's still that ten-hour drive this evening.

When I left the hotel and greeted the world this morning, it was very foggy. Overnight it had rained a little bit, but the forecast said it would pass. So, off I headed for Cook's Corner and the islands off that spit of land, in search of the ocean and a rocky beach with tide pools. 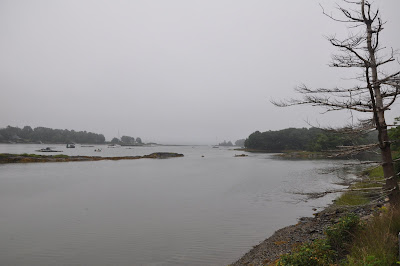 Lots of boats seemed stranded on the sandy shoals in the fingers of water that reached inland. Was the tide coming or going? I couldn't tell.

Lots of houses, some agriculture, and plenty of roadwork waiting to continue when the crews clocked in for the day. But where were the rocky beaches?

I drove to the end of the road, which stopped literally a stone's throw from the ocean. There to the left was a Land's End shop (closed - it was only a bit past 8 AM), and in front was a rocky beach, sort of, smaller than most parking lots.

Here's the beach to the left: 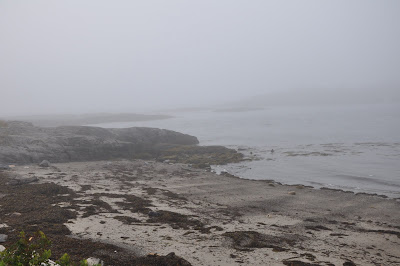 and here it is to the right: 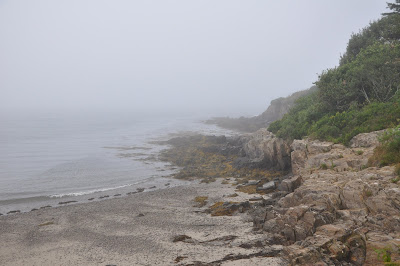 I could hear the rush of water out there in the fog. This did not bode well. Was the tide coming or going? I still couldn't tell. So I clambered down the rocks to the beach proper to see what interesting things awaited. 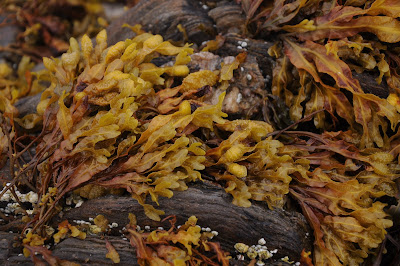 Are these nobbly pods seed pods or air bladders? Woodswoman Extraordinaire wrote about this very same seaweed on her blog recently from her trip to Maine. She and her husband found a GREAT rocky beach to explore, with plenty of tide pools. They were further north than I and on vacation. 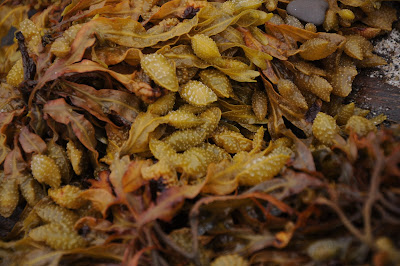 Is this stuff great or what?!? It is no surprise to me that the early people who lived along coasts (I'm thinking England and Ireland here) thought this was the hair of some kind of water sprite that would entice men to their watery deaths. 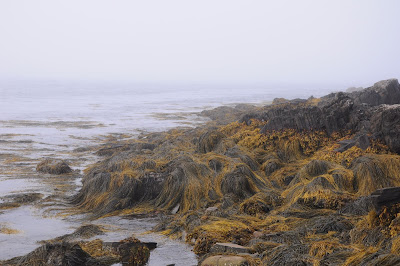 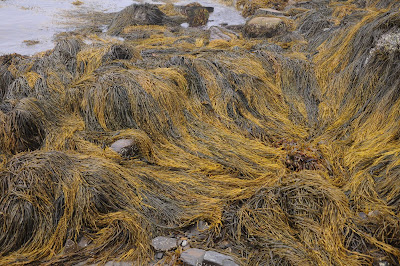 Here's another rubbery seaweed - reminded me of moss or a lichen. This was washed up in the flotsom cast upon the shore by the waves. 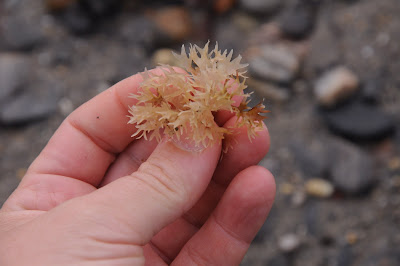 I spent several minutes watching the rocks at the water's edge, trying to determine which direction the tide was flowing. I finally concluded it was coming in. The rise was not as dramatic as what I witnessed when I was up in Alaska, where you could literally see it rising; one could out-walk it, but one also had to keep one's eyes open.

I tried to get some classic Maine coast tourist shots. Here are some boats in the fog. 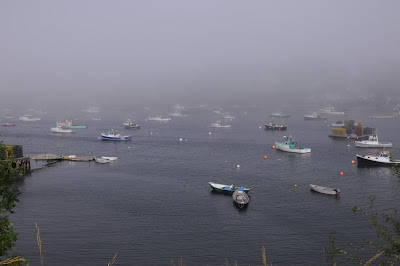 Isn't this the best weather vane? It was on top of a church. Can you see the little people in the boat? 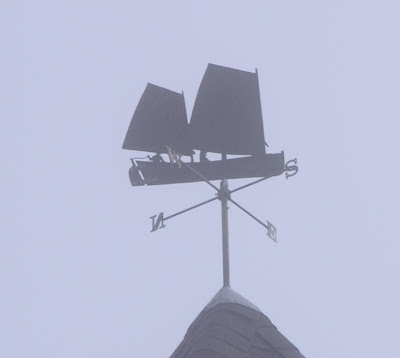 I drove around some more, still searching for that rocky beach. No luck, but I did find some more little coves that looked kind of neat in the fog. 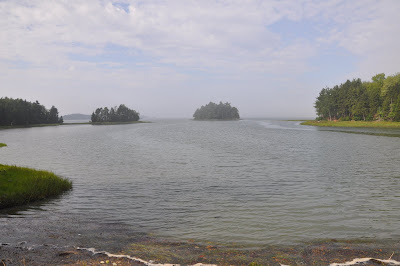 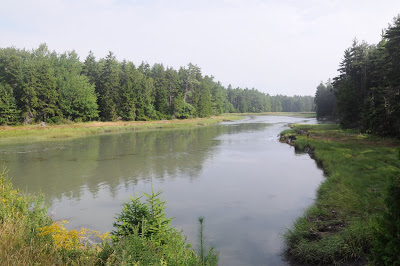 By 9:45 I was hungry, so I drove to a Friendly's for breakfast, then headed up Route 24 towards Augusta. It was a lovely back road (speed limit about 40), with glimpses of the ocean, of fingers of seawater reaching in towards the land, of railroad tracks, of small towns with beautiful old New England houses (none of which I photographed).

And now I'm at the Arboretum. I've walked the trails (that will be in the next post), and am now just waiting until my designated slot for my interview. I have 45 minutes to go.
Posted by Ellen Rathbone at 1:22 PM