As per my usual routine, when I got home from work yesterday, I let the dog out into the yard to romp and pee. I strolled along after him, taking a look at the flower gardens (sigh - they need a LOT of work), when I saw the weeniest little monarch caterpillar. Had to rush inside for the camera. 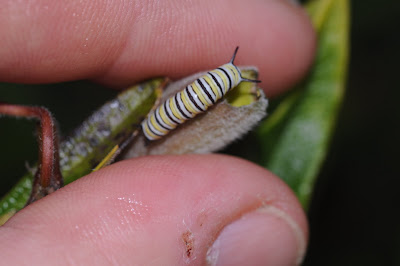 It may have been small, but its appetite was large, for it was tackling a whole butterflyweed pod all on its own. 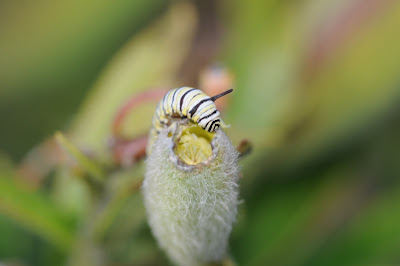 Nearby, on another branch of the plant, was an older sibling. It was happily munching away on its own pod. 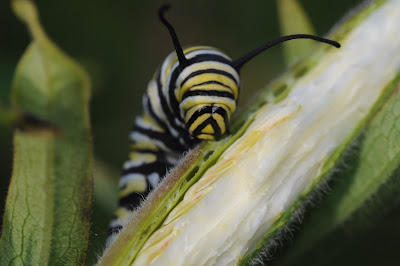 Its antennae were waving about as it chewed away. I tried to capture it on the video setting. Take your Dramamine before viewing.

As I continued my perusal of the beds, I found two more monarch caterpillars. This brings the month's total to about a half dozen...and that's just with casual glances at the butterflyweeds.
Butterflyweed (Asclepias turberosa), by the way, is a member of the milkweed clan, which is why monarchs lay their eggs on it and their larvae eat it. I only have one genuine milkweed plant in my yard - in my onion patch. It's not for lack of trying, though - I've been trying for years to establish milkweed, but with no success.
I did have some narrow leaf milkweed (A. fascicularis) in the gardens, but most of it has been pushed out by the aggressive lupines and beebalm. The first couple of years this milkweed was in the garden, though, the monarchs made use of it, too. I'll take a look for it tonight when I get home.
I also noticed a robust Indian Tobacco plant (Lobelia inflata) growing at the base of one of my dogwoods. Hurrah! The last time I saw this plant and photographed it, it disappeared before I could take a good long look at it. So, was delighted to find it here. As you can see, the flowers are quite small. 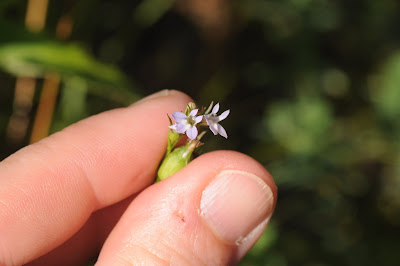 But look at those pouches. These are what develops after fertilization. My friend Jackie says they remind her of tobacco pouches. I just wrote about Indian Tobacco for the Adirondack Almanack, so you can read about it here if you are interested in learning more about this lovely little lobelia. 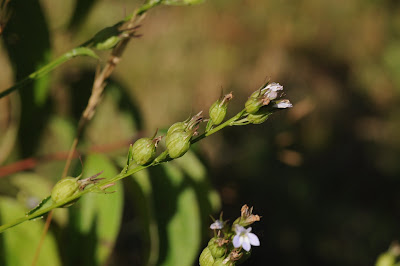